We're talking a week ago, Friday. Got some catching up to do, so let's play...

It was a relatively light Card Night from a quantity standpoint, yet it ended up being one of the more interesting. Let's start with the new stuff, though. I passed on Topps flagship on this night in favor of other current offerings. A pack of '13 Topps Archives yielded an '83 All-Star Johnny Bench. The best-looking base cards were a pair of Phillies on '72 designs, Roy Halladay and Mike Schmidt. Busting a pack of '13 Topps Opening Day netted Mauer, Longoria, and a spare copy of Jay Bruce havin' fun with a face full of shaving cream. That's available for any Dodgers inserts I still need, so drop me a line if you want Bruce.

The best of the current lot turned out to be a pack of Panini Triple Play on this night. I hadn't opened any of these in several weeks. I got lucky with this one, which featured two Kershaws, a sticker and a weird "When I Was a Kid" card featuring him playing indoor hockey with someone named Matthew Stafford, who is apparently a football player. I also got an Ethier, which actually looks like him. That's not always a given with these things. Actually, most of the cards in this pack looked pretty cool, but (to continue with the Dodger love) Buster Posey looked... well, kinda special.

I only opened a couple of other things from my eBay haul before moving on to repacks. Dave Winfield was the highlight of a pack of '88 Fleer Star Sickers. Then there was this... 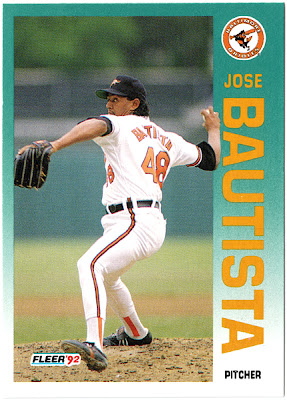 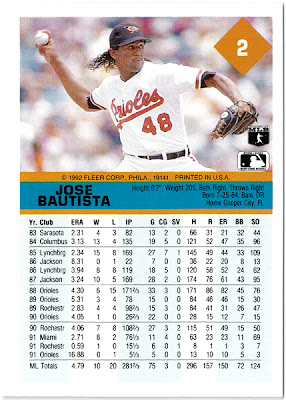 You may recall from the last episode of Feeding the Habit that I showed you Jose Mesa, then also of the Orioles, from the first pack of these I'd busted the night before. I mean, check out the Jheri curl action! They must have gotten their hands on a case of Soul Glow! Thanks to Fleer, I will now and forever think of Jose Mesa and Jose Bautista as the Jheri Curl Twins.

On to the repacks. I started with half of a Fairfield 100-card hanger, the type that promises three vintage cards. I've had some nice luck with these. And I would have considered this a continuation of that luck were it not for the fact that, thanks to the Night Owl, I'm swimming in '77 Topps right now. So the '77 Jim Sundberg, Nino Espinosa and Rich Folkers cards lost a bit of their luster. Gee, thanks Night Owl! 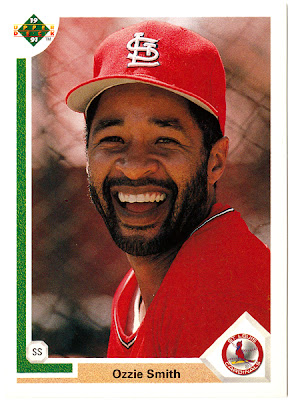 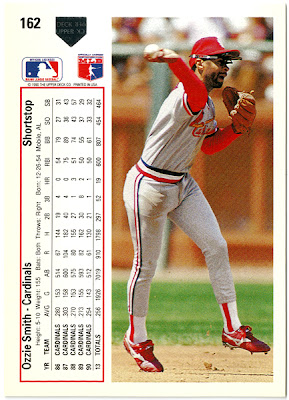 If I already have this card of the Wizard, it had long since vacated my dodgy memory by the time the repack delivered this one to me. And it's a keeper. You get his infectious love of the game on the front, while he practices his raison d'être on the back. 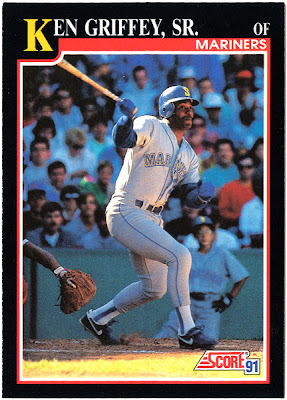 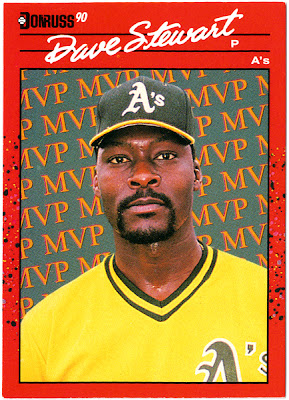 I dug the black border and the deep shadows of this card of the senior Griffey, which was nice because it's rare that I get excited about anything from this set. And speaking of the bottom of the junk wax barrel (lookin' at you, 1990 Donruss), what's wrong with poor Dave Stewart? My wife, who's a nurse, tells me that Stewart had better have a doctor check his liver functions, stat. Yellow eyes are not a good sign.

Okay, here's where the night got interesting. You just never know with repacks. I picked up this cheap-ass lookin' $1.99 box on a lark from K-Mart on vacation. 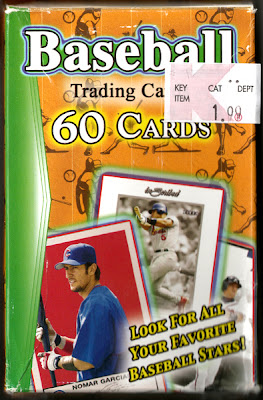 There was just no way that this was going to be anything worthwhile. But I figured that for two bucks it was worth giving it a shot, if for no other reason than for the sake of variety. It started off exactly as I'd suspected it would, with a smattering of '88 Donruss and '90 Upper Deck. Then I got to a few nondescript '86 Topps cards, and I thought that this might end up being the highlight: 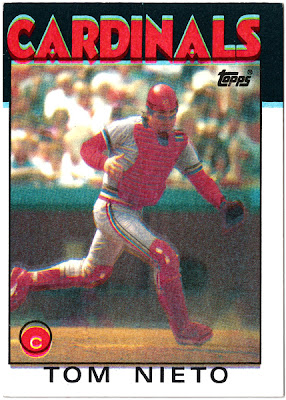 I mean, it is pretty cool. I kinda wish I had a pair of old-school 3-D glasses lying around so I could look at this thing and see what baseball probably looked like to Doc Ellis.

I would likely have been satisfied that this $2 experiment had delivered on its very limited promise by this point. In fact, to be honest, my mind had begun to wander a bit. I can't remember where along the line I'd boarded this train of thought, but I found myself musing about the reasons why Jim Kaat is one of my favorite players. He was a thinking man's pitcher. He worked fast. He could hit. He was one of the best fielding pitchers ever. He played forever. He's one of the best color men in broadcasting. And... I'm currently holding his card in my hand... 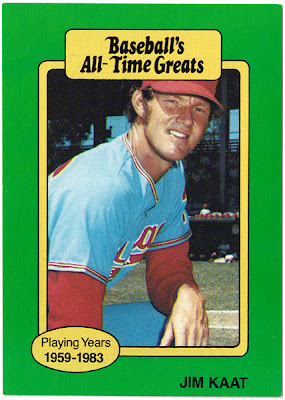 Okay, that was weird. Thinking about the guy for no discernible reason, and suddenly his card shows up in the pack I'm busting. Hell, maybe I should think about Hank Aaron, or Ted Williams, or Walter Johnson, or Lou Gehrig... Holy crap! It worked. They all showed up in their green-bordered glory. I had a bunch of these green All-Time Greats already, but as I kept going... 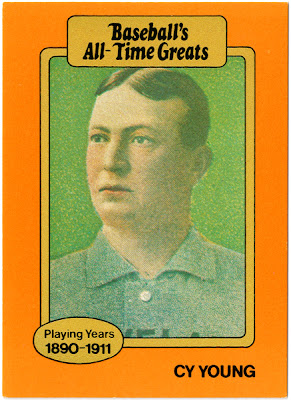 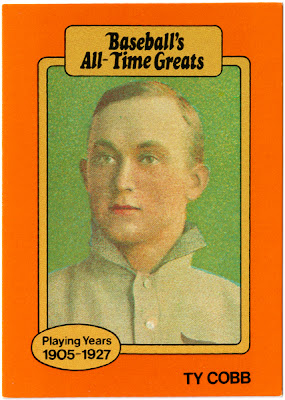 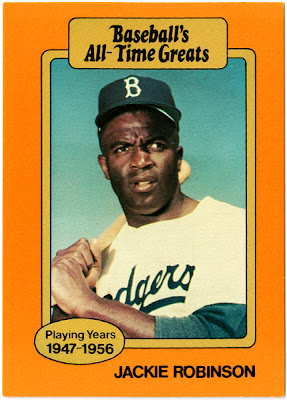 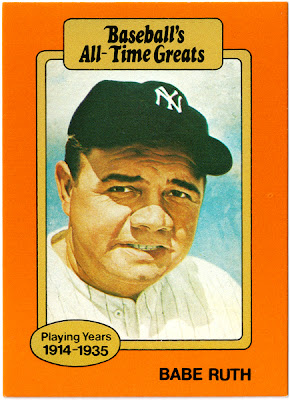 They turned orange! Apparently, this was one strange set of cards. I call them 1987 cards because that's the shorthand that's been adopted to try to categorize them. But they trickled out over the course of several years, with these odd orange variations working their way into the mix. Sometimes they use the same picture as their green counterpart, and sometimes they don't. Sometimes they're players who weren't in the original green collection, which was inexplicably the case for Cy Young. Just odd. And random. And, therefore, awesome. Especially the new-to-me Jackie Robinson, which is much better looking than the green version.

Believe it or not, my bang only got bigger for my two bucks. Next up came a bunch of 1987 O-Pee-Chee cards. These Canadian copycats appear in sporadic fashion throughout my collection, but '87 was definitely one of the years in which I'd been decidedly lacking. Nice bonus. 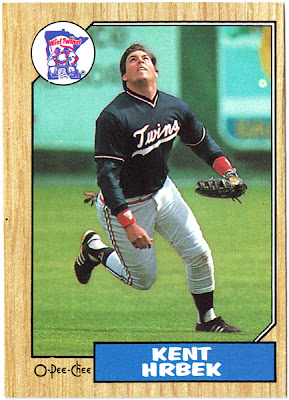 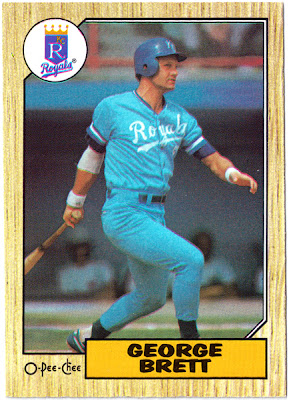 Brett may have been a troisieme-but, but Hrbek was a premier-but! 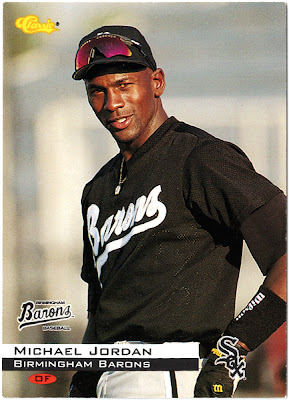 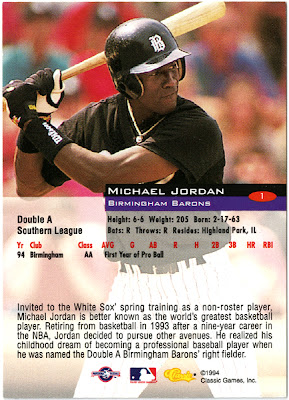 Then it all ended with a few more crappy '88 Donruss cards, and I was left to wonder if it had all been a crazy dream, brought on by that wacked-out Nieto card. For half of the cost of a pack of Topps Heritage, which seems to inevitably disappoint, I got to enjoy all of this glorious randomness. Thanks K-Mart.
Posted by petethan at 11:09 AM