Give Me a Break (With a Side of Repack)

Hello baseball fans. Long time, no write. Been busy doing the same thing you all are probably doing as well. Parked in front of the boob tube, with the volume loud enough to make the neighbors think a ballpark sprang up next door, missing not a single pitch of post-season baseball. In addition to my incredibly understanding family, I need to also thank an inanimate object (DVR) and a workplace concept (PTO, paid time off) for aiding in appeasing my OCD.

With my time being spent watching moving players instead of looking at still pictures, and the need to avoid pesky scores on the internet before I'm ready to know them, activity has ground to a near halt around these parts. It's actually been a nice little break. Since I joined in this whole card blogging deal at start of this baseball season, I've managed to make some trades, win some contests, get and send some PWEs, knock off some want list needs for a few people, and write a lot of words that may or may not have been read by anyone other than myself.

But there remained a few new things to try, and Chris from View from the Skybox presented a couple of opportunities that I couldn't resist. First, he had the brilliant idea to solicit "repack" swaps. That is to say, he suggested that a random hundred (or so) cards be assembled, repack style, for exchange. So it's a trade, but without the high and specific expectations that usually come with that concept. The idea being to deliver something more akin to a dollar store repack: a little fun, some junk wax, and an occasional minor "hit." I love repacks, and I have plenty of random duplicates, so I was wholeheartedly in. And Chris delivered on the fun. Let's play...

There was the usual stash of overproduction-era cardboard, with the occasional unexpected new addition for my collection. 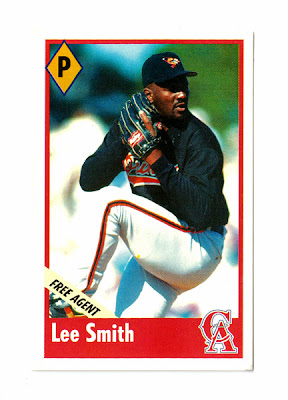 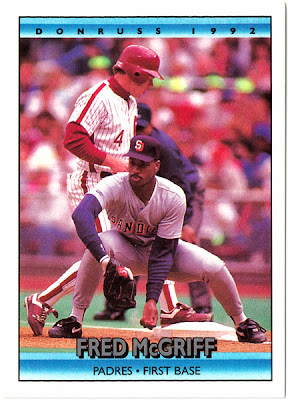 I don't think I had any of these '95 stickers before getting a few from Chris. And the Crime Dog (with cameo Nails) was new to me, too. Chris also sent a healthy helping of more recent fare. 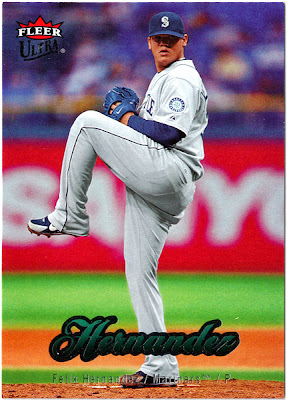 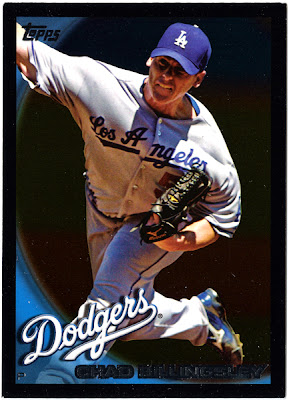 He appeared to target pitchers, knowing of my affinity for moundsmen. There was more than one King Felix card in my repack. And the black Bills is pretty sweet, too. 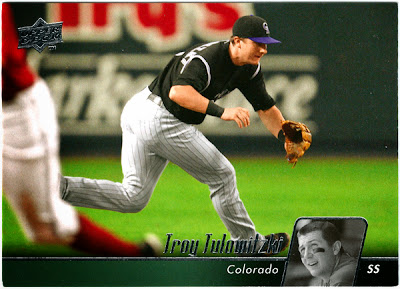 Chris also sent a goodly sum of 2010 Upper Deck, which was great because I don't have many cards from this set yet. I love the design, but the obscured logos licensing issues meant for some inferior photo choices, especially for UD.

Here are my two favorites from the repack: 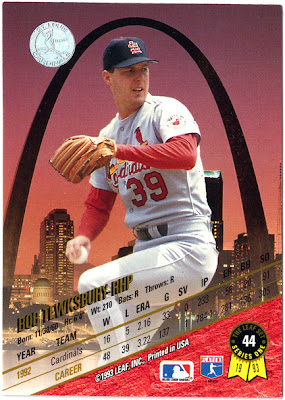 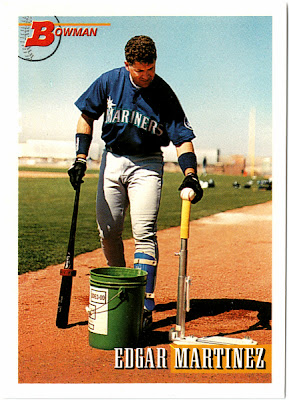 Turns out Bob Tewksbury kept some pretty detailed and interesting game notes/personal scouting reports during his pitching days. And this guy was a pitcher. His fastball (or should I say, "fast" ball?) topped out at just over the mid '80s mark. And yet the man was an all-star who won 110 games in a thirteen-year big-league career, most notably with the Cardinals. He wasn't throwing the ball past anyone, so he must have been doing some serious pitching. For anyone, like me, who loves this part of the game, the ongoing series of posts by David Laurila at FanGraphs based on Tewksbury's recollections and reminiscences while reviewing the notebooks is a gold mine. Well worth checking out.

As for Edgar, he's the greatest designated hitter the game has seen to date, not to mention a class act. The '93 Bowman set has fast become one of my retroactive favorites from that era, and this card didn't show up among those I'd acquired in the Craigslist boxes I got a few months ago. In fact, I'd never seen the card until Chris's repack. And it's a gem. To top it all off, the doughnut makes it a mini-collection hit! Mmmmmm... Doughnuts!

I can only hope Chris got as much enjoyment out of the (Royals-intensive) repacks that I sent him.

I said that Chris had two great ideas. The second was a Prizm break. I'm not sure I ever picked up a pack of 2012 Prizm, so when Chris announced that he was holding a break, I pounced on the opportunity to join in. In fact, I made the Dodgers the first team selected in the break. A group break was one thing that I knew I wanted to try, and the Prizm thing seemed like the perfect opportunity.

Now, it turns out I actually have some negative things to say about this, which is pretty rare around this playground, with its emphasis on fun. But I want to stress that absolutely none of the negativity is directed toward Chris. The break was a lot of fun, and he did a great job with it. I've just never been much of a gambler. And my luck in this break didn't do anything to improve my attitude in that regard.

First, let's look at the cards in question. They're thick. And shiny. Really shiny. I am only slowly coming to enjoy shiny baseball cards. I'm an old man in the disguise of a middle-aged man (which amounts to the same thing to all of you kids out there, including my own). As a result, I like my baseball cards made of dull and mushy cardboard. This Prizm thing is really just a bit too much for me. In fact, I think I enjoy the way the pictures look on the back better than I do the front. 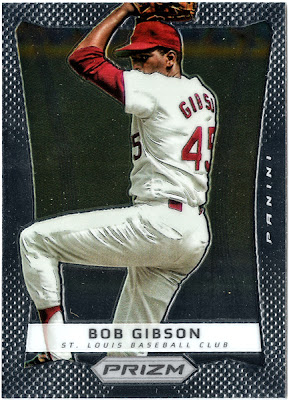 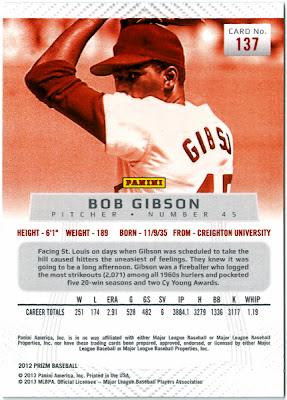 They're baseball cards, though. Which means I want them, whether I love them or not. Buying in for the Dodgers was a no-brainer. But when there were still quite a few teams left, and discount bulk prices were on offer, I jumped in with three additional teams, which proved to be a decent idea... even though I fumbled it a bit. I told Chris I'd buy in with the Cardinals, Reds and Giants. I was feeling pretty good about that decision after the first couple of boxes (there were four, total) because I'd managed to score a Pete Rose, a Johnny Bench and a Joey Votto green parallel.

Except that I didn't. Gavin, of the excellent Baseball Card Breakdown (with its must-see Refractin' Action!) commented on a break post that he was glad he picked up the Reds at the last minute. Naturally, I replied with a "you must be mistaken, my good chap," and then went to my original email to Chris to confirm my Big Red Machine ownership. Yup, I purchased the Dodgers, Cardinals, Giants and... Cubs. The Cubs? Seriously? I thought Reds and typed Cubs. Friggin' genius. That did nothing to add to my fun. Neither did my "luck" with the Dodgers. Here's the breakdown from my first time at the baseball card roulette wheel: 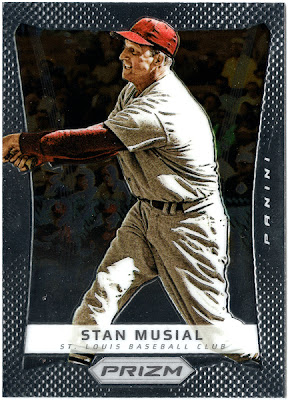 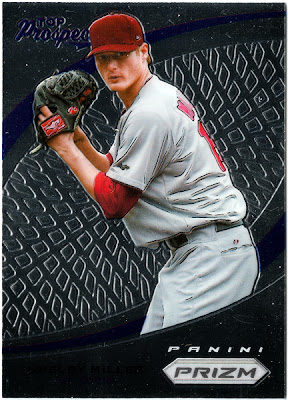 The Cardinals won the 2011 World Series. So they were very well represented in this 2012 set. And even better represented in my haul from the Prizm break. The numbers after the names represent how many copies I netted of each card. If the number is higher than one, and it's a card you want/need, let me know. As you'll see, I still have some needs of my own, and I'd love to work out a trade or two. 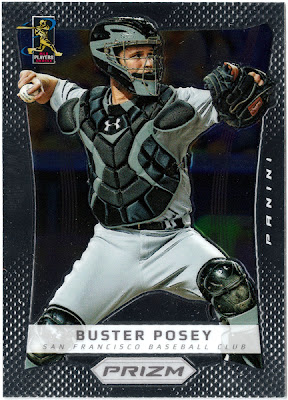 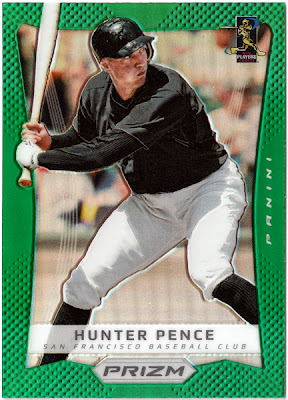 Some of you may have been asking yourselves why on Earth I bought in for the Giants. (Isn't it cute how I still think someone's actually reading this?) Well, it's just too painful to talk about... yet. It's a problem, and a serious one. Perhaps only the impending Dodgers World Championship will enable me to come clean about it. Stay tuned. 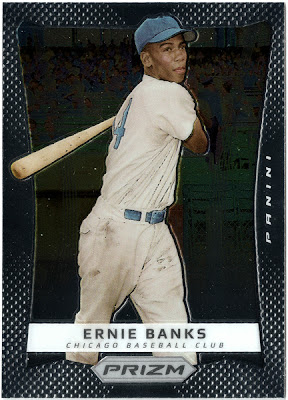 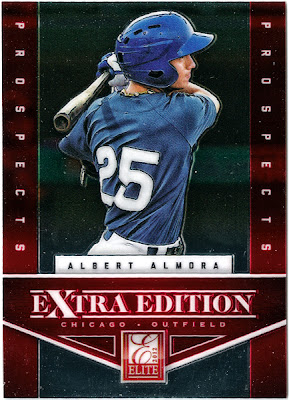 So, yeah... I got the Cubs. Anyone need a shiny Darwin Barney? 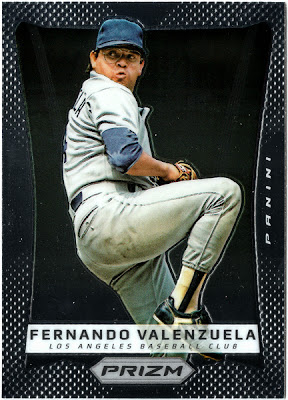 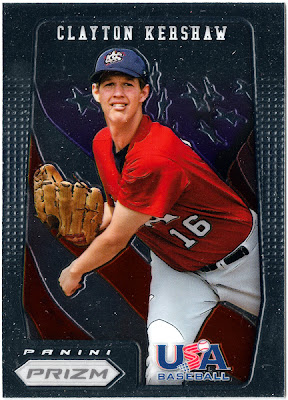 Okay, here's what I was really after. Let's see how I did...

The Kemp came out of the second-to-last pack of the break. So it was almost Crawford, Ethier and Herrera.

Let's take a look at the Dodgers base cards that I didn't get:

I guess I was actually lucky to get a parallel (of, by far, the least exciting Dodger in the set) and the Kershaw insert (which, technically, is a USA card, not a Dodgers card, so thanks for not getting technical, Chris). But it would be difficult to classify my first experience with a group break as anything other than a disappointment.

Chris to the rescue. He told those of us who bought in that we'd get some "extras" along with our break booty. It was the extras that managed to turn my frown upside down. 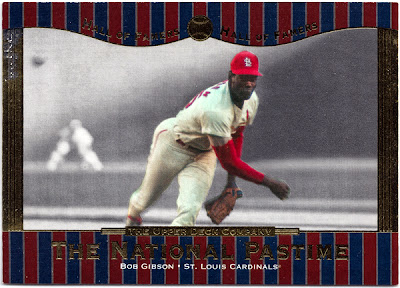 Gibson was one of my favorites from the Prizm break, and also from the extras. 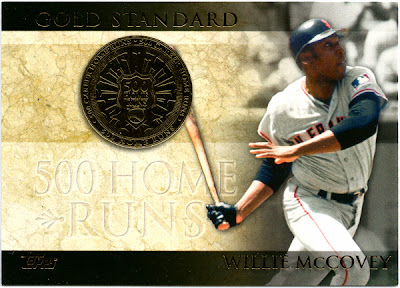 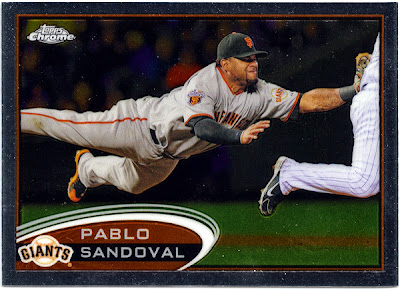 More Giants. I need help. Why? Why did I ask for Giants? Well, it's because... oh, I just can't talk about it! Not yet, at least. Let's just say that I'm starting to understand what Patty Hearst went through... 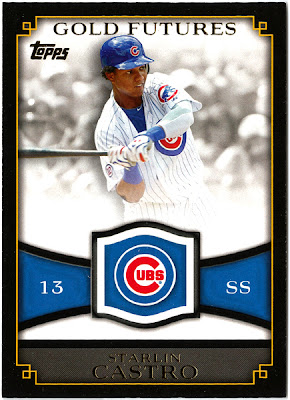 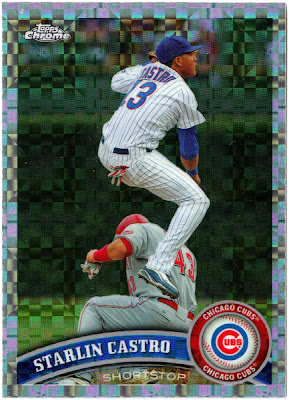 These were the best of the extras. I guess being a Cubs fan has its benefits. There must be very few of them out there for these to be readily available to perform throw-in duty. Maybe Chris wanted to compensate for my not landing Starlin in the Prizm break. 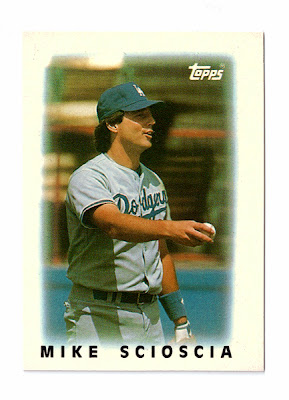 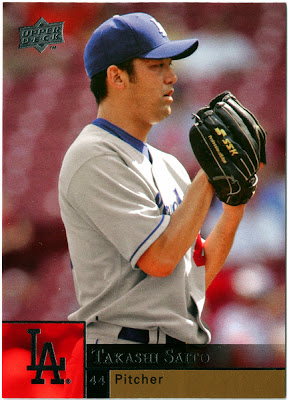 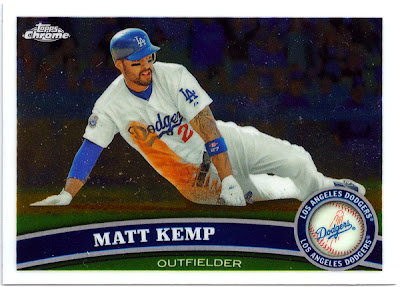 Of course, while it's bonusville being a Cubs fan, the opposite is true for us (non-Night-Owl) Dodgers fans. There are just too many of us out there. Certainly can't complain about getting Scioscia or Saito, and the Chrome Kemp is actually pretty sweet for shiny. But I guess I have to resign myself to the fact that the Scullys and Kershaws are probably gonna be long gone by the time people get around to this eccentric and fickle blogger.

Fortunately, in addition to being a Dodgers fan, I am a devotee of the Random. And Chris hit one out of Random Park with this shiny card of a 19th-century Hall-of-Famer. 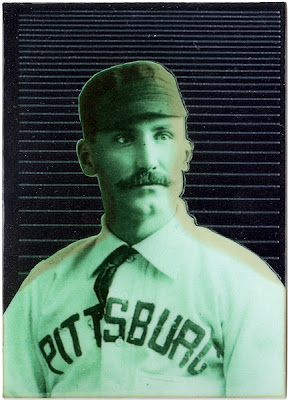 Dude played his last game in 1907. He's a Hall-of-Famer, though no casual fan will have ever heard of him. And here he is, in a photo that looks like it was lifted directly from an old tobacco card, slapped on top of 1990s shiny silver foil! Awesome. Random. Perfect. Thanks for tons of fun, Chris!
Posted by petethan at 7:42 PM