It didn't look good after game one.

The last two times we were "treated" to the Red Sox in the World Series, the Fall Classic became the ultimate anticlimax. The previous Sox-Cardinals matchup, in 2004? The Series was over before we'd even had a chance to catch our breath following their stunning comeback in the ALCS against the Yankees. And remember that masterpiece against the Rockies in '07? Remember anything about that series at all? Did you forget that the Rockies ever made it to a World Series until I just reminded you? I wouldn't blame you.

It didn't look like 2013 was gonna be much better after game one's snooze-fest.

But give credit to St. Louis (and to anyone in a Red Sox uniform trying to throw from home to third). The Cards haven't allowed Beards to have the same power as Idiots or Bloody Socks. And now we really have a Series, or as my Grandpa always liked to call it, the World Serious. When your team isn't part of the action, all you can ask for is entertaining games and a competitive series. And it looks like we're gonna get that. We've finally got a piece of the pie.

Considering how close we are to the end of meaningful baseball for five months, we should be thankful for it. Even with the unfortunate lack of Dodger Blue on display.

No boring Rex Sox sweep this time. It's good to be "movin' on up." Did I say Serious? 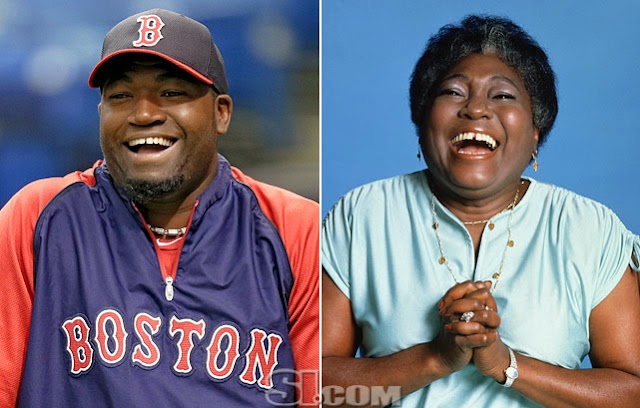 A couple of questions. (Almost certainly rhetorical, given the state of this blog's readership, but I'll ask 'em anyway.)

Why is the play that ended game three being called a "controversial call that will be debated for years to come?" The call was obviously correct from the moment it was made, and none of the constant analysis that we've been subjected to all night and all morning has done anything to change that. Bizzare? Incredible? Frustrating (to Sox fans)? Miraculous (to Cards fans)? Unforgettable? Yes. Controversial? No.

With just two-to-four games left in his Hall-of-Fame-recognized career as a broadcast analyst, I have to ask why there has been so much hatred of Tim McCarver, or at least of the job he has done in that capacity over the years? I can see why he may not be everyone's cup of tea. He certainly has his head-scratcher moments, at times. But I like him. Always have. He certainly doesn't fall short in the category of first-hand knowledge of the game, whether you agree with what he has to say or not. And it's clear that he's passionate about the game we love, and isn't afraid to express his sentiments about it.

Does anyone still think American League rules produce a game anywhere near as exciting as a game played under baseball rules (aka, National League rules)? The designated hitter is great... in the All-Star game. That's about it. But I have a very real fear that the DH will be adopted league-wide in my lifetime, which would be like installing Astroturf in every big-league park, or banning hot dog sales at games. Please don't. Pretty please.

Besides, with the DH in play, rookie pitchers could no longer joyously proclaim "Now we're up in the big leagues, gettin' our turn at bat."

Last question:  Who's got the smaller strike zone, George Jefferson or Ken Rosenthal?

Now, if you'll excuse me, I've gotta get in the kitchen, fry up some fish, keep my beans from burning on the grill, and get ready for game four.

[Edit: As Gavin of Baseball Card Breakdown points out, I managed to confuse Esther Rolle (Big Papita?) of Good Times with Isabel Sanford of The Jeffersons. So, I guess this post ain't as DY-NO-MITE as I'd hoped it would be.]
Posted by petethan at 4:05 PM