I Was There: The Aaron Boone Game

This is Part VI of a series (and a contest) that was introduced here. 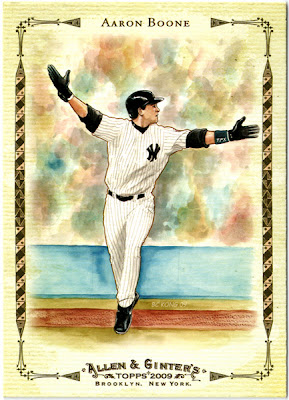 It looked like we were going to see the World Series that broke a famous curse. Either the Cubs were going to win their first championship since 1908, or the Red Sox were going to get Yankee Stadium crowds to stop chanting "1918," the year of their last taste of the title. But Babe Ruth and a billy goat proved too strong to submit to the will of the majority of baseball fandom in 2003. (Who knew that the goat would prove to be stronger than the Bambino? Answer: Cubs fans.)

Steve Bartman, Mark Prior, and one of the Alex Gonzalezes had already done their thing, and the Marlins put the nail in the Cubs coffin the night before. It was time for another game seven, and another opportunity for a curse to reassert its power. Fortunately for me, although it may not have been with the Cubs or the Red Sox, luck was squarely on my side.

It all started on a dreary late-September day at Yankee Stadium. I'm not sure what day it was. The game I'd gone to was meaningless. The Yanks had already clinched the division title. But they were playing and I had the day off, so I went. I don't remember if there was a rain delay, or if I was just kinda bored, but I found myself wandering around the stadium. I'm not sure why I hadn't even considered trying to get tickets for the post season. I guess I figured they'd all be sold out in a matter of minutes and it wasn't worth the hassle. But when I came upon an advance ticket sales window with nobody in line, I figured, what the heck, it can't hurt to ask.

As I'd expected, there were no longer tickets available for the Division Series. World Series tickets weren't on sale yet. Nothing was available for games one or two of a potential Championship Series either. But there were a few left for a game six or seven. So I picked up two tickets for a potential game seven, high above third base in the upper deck, and figured that there wasn't much chance that I'd get the opportunity to use them.

But the Yanks beat the Twins in the Division Series and lined up to face Boston in the ALCS. With the Bombers leading the series, three games to two, I was conflicted about game six. By this time I was an unlikely Yankee fan. I didn't want to see them lose to the friggin' Red Sox. But I sure wanted to go to a game seven. In the end, I got what I wished for.

Cathy, my wife-to-be, was also a Yankee fan. In fact, she was a new baseball fan. She'd only arrived in the U.S. from the Philippines about a year before, with no interest in the game whatsoever. But by the time I'd secured these tickets she was already sporting her Hideki Matsui jersey and ready to cheer her team to victory that night. 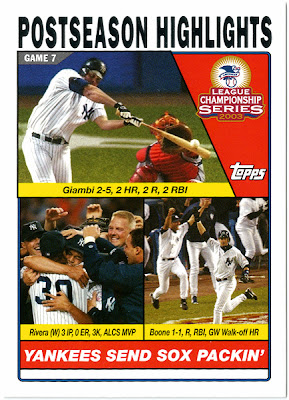 I won't rehash the game in detail, because you almost certainly know all about it. Grady Little decides to stick with a tiring Pedro Martinez, and the Yanks rally. Cathy gets to see her favorite player slide across the plate with the tying run in the eighth inning and leap into the air in celebration. Mariano Rivera tosses three scoreless innings...

And by this time, I have to report, my Cathy, the new baseball fan, has run out of steam. It's cold. She's tired. It's been exciting, but she wants to go home. I have to inform her, politely but firmly, that there's not a chance in hell that we're leaving game seven of the Championship Series before it's over, even if it goes 247 innings and lasts another week and a half.

Fortunately, on the first pitch of the eleventh inning, Aaron Boone sends us all home happy.

We've got a real barn-burner in the Surreal Seven contest. Here's the leaderboard as it stands at the end of game six:

With one game left, Bo has pulled even with Al, though Al currently holds the tie-breaker on difficulty points. Can Nick or Marcus make a miraculous comeback? (Well, no, actually. That would be impossible.) Can Bo overtake Al at the last moment? Or does Al Kawamoto, mysterious hockey fan, hold on to his lead to take the (long-awaited) prize? Stay tuned.
Posted by petethan at 11:44 AM