Yesterday I showed off the Kershaws from my recent Just Commons impulse buy. The idea was to ease the pain of the Dodgers' playoff ouster by throwing $10 worth of inexpensive cardboard into the virtual shopping cart, hitting the minimum purchase for free shipping.

I forgot to mention that the impetus for that mini shopping spree was a post by Nick at Dime Boxes. I'm a little sheepish about mentioning that because it's not the first idea that I've stolen from Nick. I shamelessly pilfered the mini-collection concept from him, as well.

But this time, despite the overwhelming evidence to the contrary, I did some of my thinking for myself. I had the great idea to target O-Pee-Chee fun for the the non-Kershaw half of my little spree.

And I had a great reason for this. It has to do with one of the advantages (which many would consider a disadvantage) of the setup at Just Commons. There are no images of the cards on their site. And I'll tell you why I think that's great. I've mentioned it in passing here, a time or two. But it's something I feel quite strongly about. I would really rather not see a card, or an image of a card, until I'm holding it in my hand, accepting it into my collection. That, of course, is impossible to accomplish in many cases. Particularly since I enjoy reading baseball card blogs, which are chock-full of pictures of cards that I don't have, and therefore that I want.

I realized that, without doing any prep work (this was an impulse buy, remember), O-Pee-Chees provided an excellent opportunity for me to get some Dodgers cards that I've never seen before. There is a caveat, though, and a rather huge one at that. I have seen all of these cards. At least I've seen (and have) their Topps equivalents. In some cases, that meant very little in terms of the desired "newness" factor. 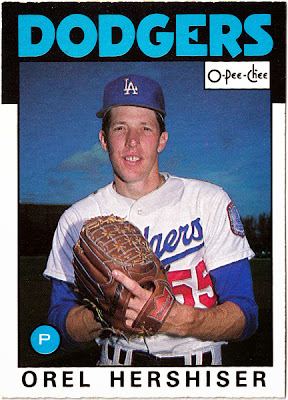 For example, in the case of the Bulldog here, the only real difference from the Topps issue is the somewhat unsightly box with the O-Pee-Chee logo slapped over the corner of the photo, with its overlarge white backdrop sticking out all the more for the card's black-dominated design. As for the '90 Fernando, there's actually zero difference in the content of the card's front. The only difference, and it's actually a rather pleasing one, is the enhanced clarity of the photo. I've always railed against the brighter stock that Traded sets from this era were printed on, but that's only because I was lamenting the inconsistency between the flagship base set and the update. These aren't supposed to be a continuation of the Topps base set, but an alternative version. As such, I really enjoy seeing some of the fuzziness of the photos sharpened up.

But what made OPC a peachy target is that the little player movement notes that appear on some of the cards also appear next to the player names on the Just Commons site. That meant that I could simply scan the list for cards that said "Now With Dodgers," or some equivalent. Here are some of the results: 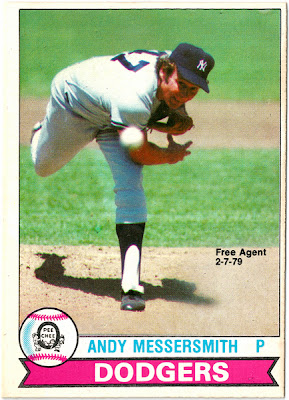 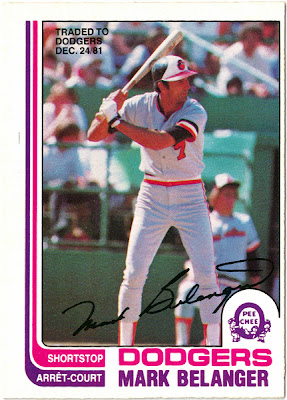 One of the fun things about these is seeing the odd color combinations. The card design is updated to reflect the new team, while the photo is unchanged. Of course, in the case of new Dodgers, that means giving them the ol' pink treatment. It doesn't look quite as odd with the Yankees uniform because Topps has subjected the Bombers to pinkification on occasion. But that Belanger card, with it's pink and purple in contrast to the Orioles orange is particularly jarring.

From a baseball standpoint, these are a pair of fantastic cards. Messersmith had been a very successful Dodger pitcher early in the decade. But this might be the only Dodgers card from his brief return to the club to end his career. I've talked about my connection to Mark Belanger and his stint in Blue at the (hibernating) Top of the Topps. 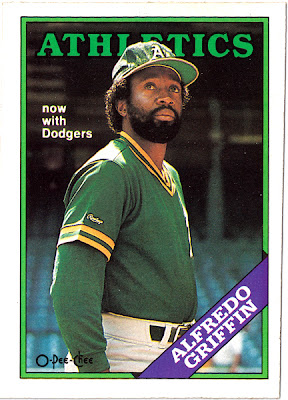 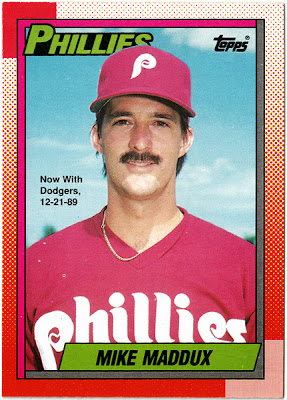 As the incorporation of the team name into the cards' design became more complex toward the end of the '80s, OPC had to settle for using the little blurbs to update the players' team status. That makes these less interesting, visually. But they're still additional Dodgers cards, so I'm all over 'em. 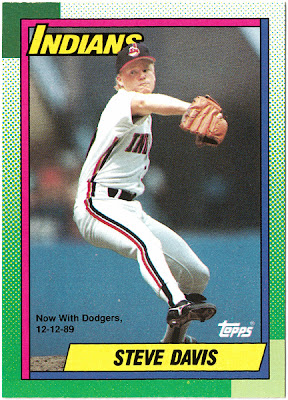 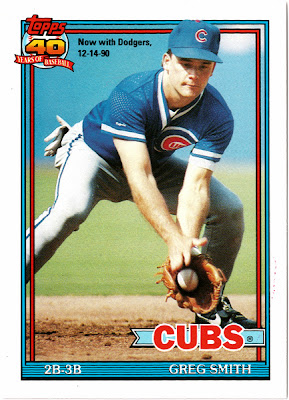 Stars and impact players are cool and all. But I dig the obscure, as well. And these are a couple of great examples. Steve Davis never made the step up from Albuquerque to the Dodgers before retiring at the end of the 1990 season. Greg Smith did manage to find his way into five games for LA in 1991 (all Dodger victories, for what it's worth). 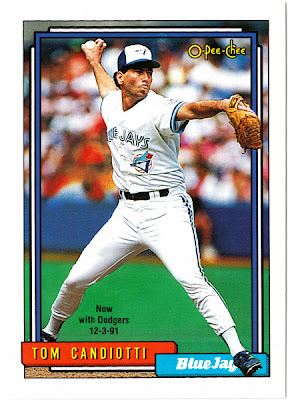 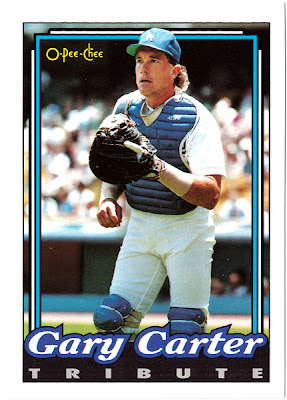 That's a great Candiotti, displaying his knuckleball grip as he leaps off the card toward the batter. And now it's a Dodgers card instead of a Blue Jays card. Sweet! I probably should have picked up all of the Gary Carter tribute cards from this set, but one of them features him with the Giants, so I just got this one.

Finally, I couldn't help sampling a couple of these player movement variations going in the opposite direction. 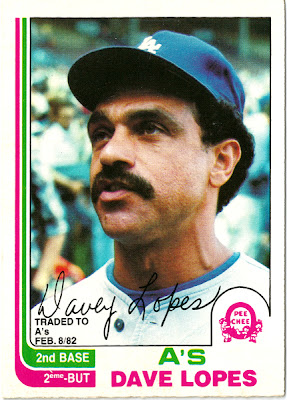 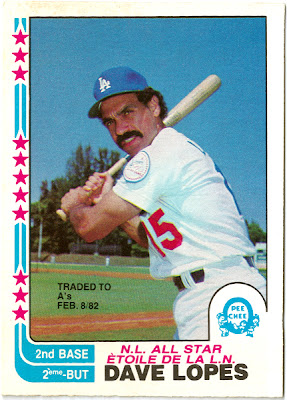 These are a couple of my favorites from the '82 Topps set, so they made for an obvious choice. Particularly with the base card, it's another example of getting a much sharper image of a very familiar picture. You also have to dig the crazy OPC logo they used here, with its odd lump jutting into the photo frame. Plus there's the French position translation on the front. I may have to consider chasing this set, the more I think about it.

Great idea to go after some O-Pee-Chees, right? In fact, it turns out that Nick beat me to this one, as well. A couple of days ago he posted again about his Just Commons booty, featuring... a whole mess of O-Pee-Chee.

Oh well. I guess I'd better swing on over to Dime Boxes to find out what I'm going to be up to next...
Posted by petethan at 11:27 AM