As part of my ongoing effort to use this blog as a place to work through the angst of seeing my Dodgers fall short of reaching the World Series for the twenty-fifth consecutive season...

Sorry, that sentence had me looking for a razor blade before it could even finish its thought.

Hey, remember when the Dodgers won the 2013 National League Division Series, three games to one over the Atlanta Braves? Sure you do. Good times.

Every year I make my own virtual baseball cards of the Dodgers. Maybe this year I'll actually finish the set. Knowing myself, I wouldn't bet on it. But I started the 2013 set recently, and since I have a blog now, I might as well subject my two readers to the results of my grown-up cut-and-paste play time. Actually, I've already forced a couple of TBall Productions on you last week with the optimistic pre-game-six Kershaw "base" card, and the depressing post-game-six post-season "highlight" card.

Let's hop into the Hot Tub Time Machine and go back to before St. Louis made me so depressed that I'd even drink Budweiser if it was the only way to help me forget the NLCS. 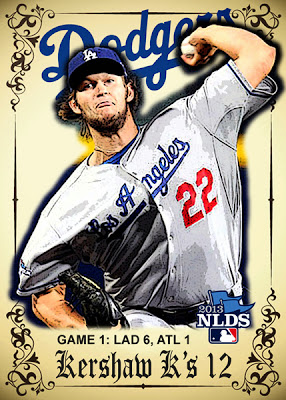 This was how the post-season started for the Dodgers. This was the way it was supposed to start. Of course, it was also supposed to end this way... 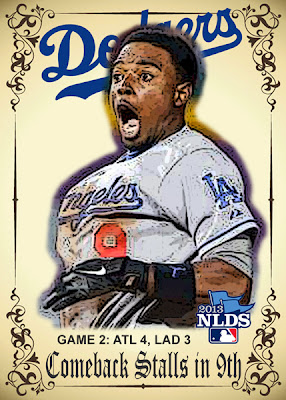 Dee Gordon's shock at being called out on a ninth-inning steal attempt wasn't so funny at the time. It would be funny after a couple of Dodger wins. It is once again not so funny. Given time, I'm sure it will get me to crack a smile again... someday. 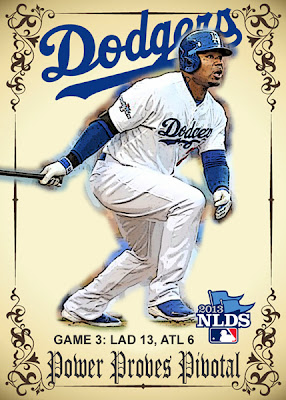 The former Red Sox were supposed to return to Fenway on Wednesday and loudly proclaim that every little thing was most certainly not gonna be all right in Boston when they got through with them. I'm sure nobody wanted that opportunity more than Carl Crawford. 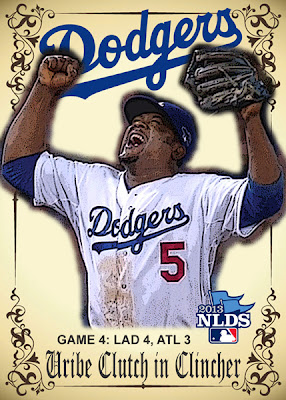 Yeah, I know, I have an irrational interest in alliteration. See, I'm working to break the habit.

This was not supposed to be the only series-clincher card in the set.

Next year! We'll get 'em next year!