Sandy Koufax lost the last start of his career, 6-0 to Jim Palmer in game two of Baltimore's 1966 World Series sweep of the Dodgers.

Bob Gibson lost game seven of the 1968 World Series to Mickey Lolich and the Detroit Tigers.

Orel Hershiser lost games one and five of the 1997 World Series to rookie Livan Hernandez of the Florida Marlins.

And Clayton Kershaw lost the decisive game six of the 2013 NLCS, in a big way, to the Cardinals behind rookie Michael Wacha.

Heroes, even big-time post-season performers, sometimes lose big games. It's never expected. And it always hurts if you're on the wrong side of the decision. But the occasional stumble should not diminish our respect and admiration for who they are and what they do.

Clayton Kershaw is still my favorite active player, even if he did give up seven runs in a game that ended the Dodgers' season short of the Fall Classic. Life is tough. It's not fair. You don't always win, no matter how hard you try, or how much you may deserve to taste victory... etc., etc.  You know, all of those good lessons that you try to prepare your kids with for the curveballs that life can throw your way.

With that in mind, half of a recent $10 Just Commons retail therapy impulse buy was devoted to celebrating my favorite player, rather than dwelling on the negativity of his final start of 2013.

In my world, last night's game one of the World Series was a far more interesting pitchers duel between Lester and Kershaw. You can guess who came out on top in my little fantasy land. Speaking of childish pursuits, let's play... 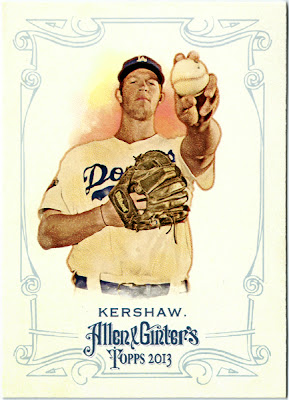 I hadn't managed to pull this gem out of a pack yet, and it's a must-have on a few levels, not the least of which being its brilliance as a Getting a Grip gem. Just Commons didn't have the 2009 Ginter available, which is also a need of mine for the same reasons. So that one's still on the table for some generous blogger out there on the lookout to make an impression by way of trade or random PWE (hint, hint). 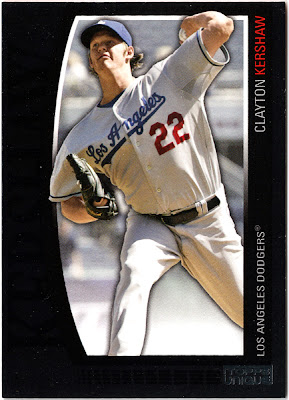 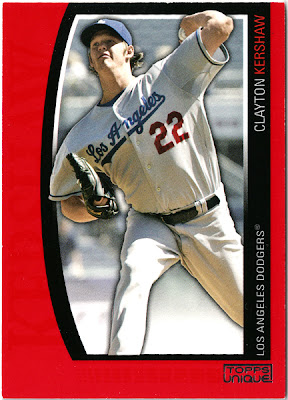 Although I only bought a pack or two of these in the day, I kinda liked 'em. So I was happy to snag the base and red versions of The Claw. (Does anyone really call him that? I'm not sure I've seen the nickname referenced anywhere other than Baseball Reference.) 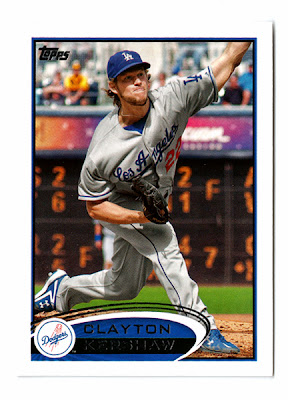 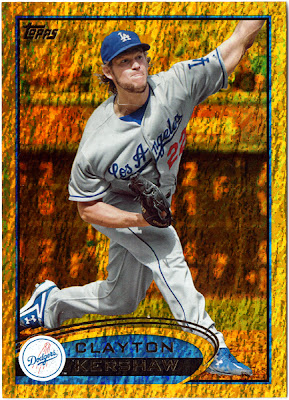 I had no idea that 2013 wasn't the first year of the return of the Topps mini experiment. I've been contemplating ordering a box of that stuff, but I'm not sure I can justify spending that kind of cash for the same cards I already own, just in slightly smaller proportions. Grabbing the Kershaws at some point will probably be enough. I'm happy to now have this '12 sample. And the gold sparkle version came with the nice surprise of scanning well. Pretty unusual for shiny cards. 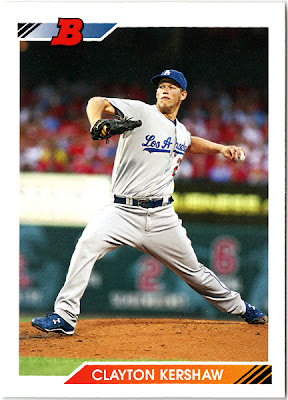 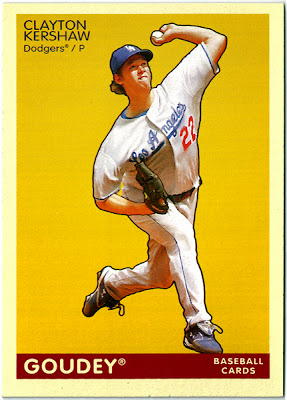 I got six more Kershaws besides the ones I'm showing here. These two are probably my favorites (other than the Grip card). I'm a sucker for simplicity and retro cool. Is spiffy cardboard better than seeing your favorite pitcher start game one of the World Series? Probably not. But it sure helps to ease the pain a bit.
Posted by petethan at 2:41 PM

Email ThisBlogThis!Share to TwitterShare to FacebookShare to Pinterest
Labels: Getting a Grip, Just Commons, Mini-Collecting