The 1939 New York Giants finished with a 77-74 (.510) record, good for fifth place in the eight-team National League, 18.5 games behind the pennant-winning Cincinnati Reds. So they weren't playing particularly meaningful ball over the final two months of the season. Yet, play ball they did.

On August 1, the Giants played ten innings in Cincinnati. Three days later, it was eleven innings in Pittsburgh. And they played another eleven-inning game against Boston when they returned home to the Polo Grounds.

Tough. But still reasonable. Until... 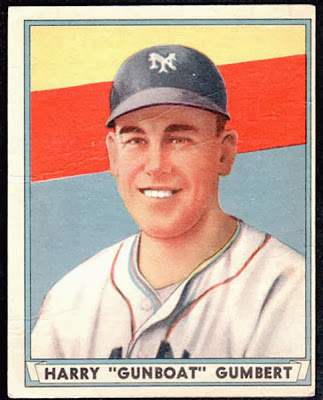 In 1939, Gumbert started on three days of rest eight times. He started on two days of rest seven times (or so the records say). He even started the first and third games of an August three-game series in Brooklyn, with just a single day of rest in between.

Naturally, it fell to Gumbert to take the hill on the final day of the season, October 1, in Boston against Casey Stengel's Bees. But Gumbert's arm was toast. In fact, not a single Giants pitcher could raise their arm above their head that day, let alone pitch in a big-league ballgame. Manager Bill Terry was in a real bind.

Let's fast-forward 54 years by flipping the digits, from '39 to '93. The Giants now call San Francisco home. And, unlike their counterparts, they are playing fantastic baseball. They already have 101 wins with three games left in the season going into their October 1 matchup against the rival Dodgers in Los Angeles. But they aren't running away with a division title. In fact, the Atlanta Braves have matched their record to this point and the Giants find themselves in a real dogfight.

They have the right guy on the mound for them on this Friday night at Chavez Ravine in 21-game winner John Burkett. Or so manager Dusty Baker thought. Times are different. The Giants only double header of the season came and went on June 1. Burkett hasn't made any starts on two days rest. In fact his last start was the first time he'd gone on just three days of rest, which is what he will have going into this game. But, like I said, times are different. And even this workload has taken its toll. Moments before game time, Burkett informs Baker that he can't go. There's nothing left in the tank.

This is where it really gets interesting...

Fortunately for the Giants, 80-year-old Manny Salvo was at Dodger Stadium that night. The California native was one of those tired-armed pitchers for the '39 Giants. As a 27-year-old rookie, Salvo had gone just 4-10, and was not used again after taking the loss in the first game of their September 15 double header at Cincinnati. Most people thought that Salvo got his nickname of "Gyp" (for Gypsy) because of his itinerant baseball career. Not so.

It turns out that Salvo was of Romani descent. In other words, a real Gypsy. Not only that, he was the son of a powerful Chovano (sorcerer). Remembering that October 1, 1939, when his manager Bill Terry was forced to forfeit his team's final game of the year in Boston, and watching Dusty Baker scramble to come up with a starter for this crucial October 1, 1993, matchup with the Dodgers, Salvo set to work...

I don't know exactly how he did it. Salvo passed away three and a half years later, having told no one of what he had done that day... no one but me. I had met Manny at Dodger Stadium in September of 1996, having enjoyed a really nice conversation with him when I found myself in the seat next to his on a Tuesday night game against the Giants. (I think the Dodgers won behind Ramon Martinez, but I'm not sure.) We exchanged numbers that night, and I was pleased when he called me in early February of '97 and invited me to his home in Vallejo for lunch. What he told me that day shocked me.

Manny "Gyp" Salvo claimed that he was able, on the night of October 1, 1993, to somehow "exchange" Harry Gumbert for John Burkett for that day, healing their tired arms in the process. He says that's why "Gumbert" was able to pitch a complete-game four-hit shutout to beat Boston 5-0 on two days of rest to end the 1939 season for the Giants. And that's why "Burkett" was able to tell Dusty Baker that he could take the mound on the night of October 1, 1993, to win his 22nd game of the year and help the Giants keep pace with the Braves.

There were so many questions that I wanted to ask. How had he done it? Couldn't he have simply healed Burkett's arm without "switching" him for Gumbert. How is it that nobody, including Burkett, knows or remembers anything about what happened? Why hadn't he done the same for Solomon Torres two days later? But Manny, whose health was failing, was too tired to continue. We made plans to meet again later in the month, but he passed away shortly thereafter. It was a fascinating story. You can look up the game info, and the information about Salvo, such as it is, and it will all match up. But, naturally, I could never bring myself to fully believe the story. Until I saw this... 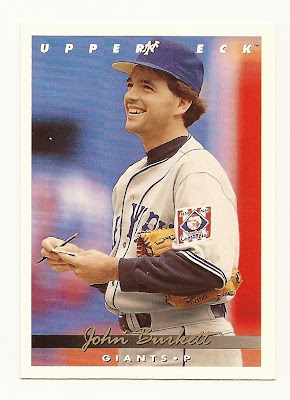 I have to fess up. I made up one or two of the details in this story. But it was for a good cause: an attempt to win a contest! This is my Round One entry in Chris' 2013 Blogger Bracket Challenge at Nachos Grande. Do yourself a favor and hop on over there this weekend to read all of the great entries and cast your votes. A good time is guaranteed for all.

Have a happy and safe Halloween, everyone.
Posted by petethan at 3:21 PM