This card, with its image provided by Chris of Nachos Grande for his 2013 Blogger Bracket Challenge, makes it look as though Chris Coghlan had been sent to play for Satan on the Hades company softball team. If so, it would undoubtedly have been the result of the mortal sin (or at least error in judgement) that he committed on the afternoon of July 25, 2010. 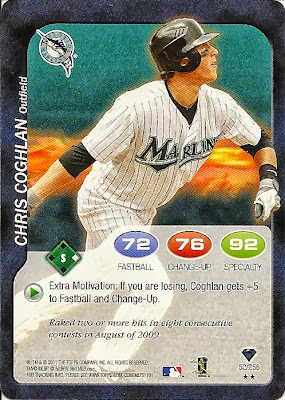 You may remember the day. Not long before, Kendry (now Kendrys) Morales of the Angels (now Mariners) ended his season (and the next) by arriving at home plate with a little bit too much exuberance following a walk-off grand slam. Perhaps jealous of that headline-grabbing cry for attention, Coghlan out-moroned Morales. Following a walk-off hit by teammate Wes Helms, Coghlan injured himself delivering a celebratory shaving-cream pie to the face of the Marlins hero. No, I'm not making this up. Need proof? It can be found here.

Coghlan, the 2009 National League Rookie of the Year, is still playing big-league ball. Well, he's still with the Marlins, so I'll let you be the judge of whether that's true or not. But he's never been able to recreate the success of his rookie season, thanks in part to the day that his 2010 season died. It's a cautionary tale, and if one less douche bag thinks it would be entertaining to celebrate anything by shoving a pie into someone's face, then it will all have been worth it. So, listen well to the ballad of Chris Coghlan. 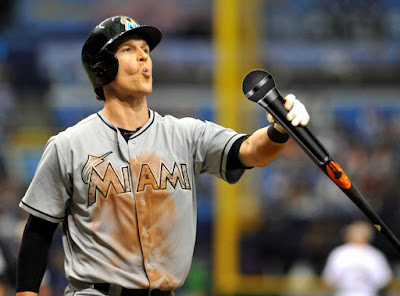 A long, long time ago
I can still remember how the ball used to jump off my bat
And I knew that I had a chance
For my contract status to enhance
And for the front office to still like my stats

So bye-bye, celebrations with pie
Torn meniscus, I won't risk it, I'm no longer that guy
And if the other boys start to ask of me why
I'll tell 'em all about the day that I cried
That would be the day my year died

I may not have had much power
And my average had begun to sour
But I could still run well
Can you believe that I would risk my goals
For a moment on the post-game show?
And now I'm stuck here playing in Hell

Well, I was the best young player in the game
That award done said so when it came
Some people said it didn't show
I guess now we'll just never know

I was a peppy little singles hitter
Now my career is in the shitter
Yes, I knew I was out of luck
That day my season died

So bye-bye, celebrations with pie
Torn meniscus, I won't risk it, I'm no longer that guy
And if the other boys start to ask of me why
I'll tell 'em all about the day that I cried
That would be the day my year died
Posted by petethan at 7:22 PM