Returning, more or less, to our regularly-scheduled programming, it's time again to take a look at highlights from another "pack" of Marlins that were caught and released by Kerry from Cards on Cards. This package was all about recent Topps product.

Opening Day 2011 looks a lot different than September 2013, which is great from a Dodgers fan perspective... 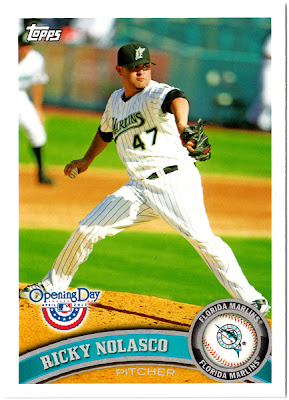 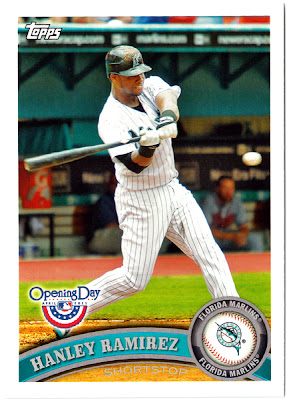 From clean and legible, though slightly dull and with a huge logo that draws away too much attention, to glossy and shiny and (unlike many years) only slightly less legible '11 flagship cards. In this case it's the end of the line for a couple of stars. Not superstars. But stars, nonetheless. 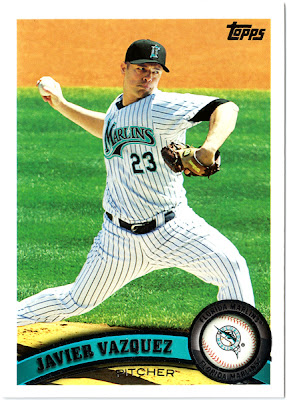 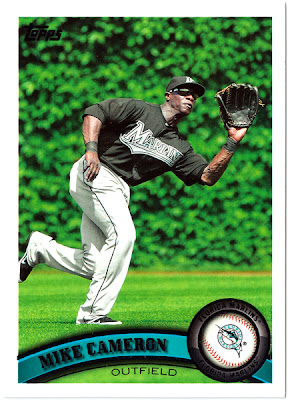 Vazquez was a double-digit winner in each of the final twelve years of his big-league career, finishing with over 2,500 strikeouts. Cameron, seen here doing what he did best, with verdant midsummer Wrigley ivy as a backdrop, was a three-time Gold Glove Award winner, a man who was traded for Ken Griffey, Jr., and smasher of four home runs in a single game. With a player like Mariano Rivera, you get a season-long goodbye. With solid players like these two, you just look up a year or two later and notice that there aren't any new baseball cards of them. The old cardboard bestows an opportunity for deserved remembrance.

Sometimes, however, it's simply all about the aesthetics. 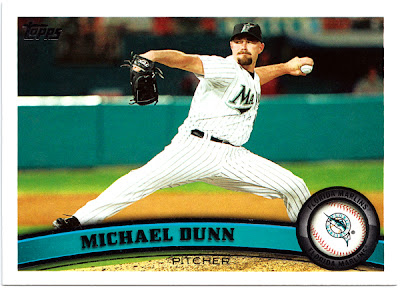 Why were there so many years when Topps limited itself to base cards of a vertical orientation? I'm glad they seem to have gotten over this unnecessary challenge to artistic excellence. 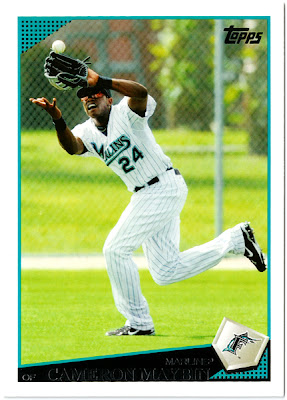 But here's a pretty sweet vertical card, too (complete illegibility of the player's name notwithstanding). The future Padre uses two hands to (presumably) complete his running catch on a fine spring day, neatly framed by the warning track and post of the chain-link outfield fence. A card this warm will soon draw envy from those of us in areas prone to the occasional snow flurry as the days grow shorter. But for now, bring on the autumn chill, because we all know what that means...

...though certainly not for the Marlins this year.

I haven't been sharing the blog love much lately, being all Random and in flux around here, so let's take a moment to give a shout out (the kids don't say that anymore, do they?) to a couple o' new kids on the blog.

First of all (and I probably should have mentioned this earlier because the break is about to close), Chris over at View from the Skybox has a pretty sweet 2012 Panini Prizm group break going on, so pop over there quick to see if there's a team you like still available.

Baseball Card Breakdown is a spiffy new blog, and they're currently trying to give away some cards, including one that's had the pleasure of sitting on a pizza. (You'll just have to go check it out.)

And finally, here's a plug for The Chronicles of Fuji, which looks to be a really fun read. It's a selfish plug, because it's gonna get me more entries in his current contest, but it's a quality blog so I can endorse with integrity. Go check it out.
Posted by petethan at 1:28 PM