Playing With My Dodgers: Jim Golden

Right-hander Jim Golden made his major league debut in the Golden State of California with a start at Dodger Stadium against the Cubs on September 30, 1960. He didn't fare particularly well, allowing five runs in seven innings. In fairness, he was facing a lineup featuring four future Hall-of-Famers (Ashburn, Banks, Williams and Santo). And his performance was sufficient to eke out a 7-5 win, with the help of some guy named Drysdale who came in for a two-inning save (though nobody was foolish enough to name it as such at the time).

Perhaps his biggest claim to fame is the fact that he was twice traded for Hall of Famers. It's not as impressive as it sounds, of course. The Dodgers sent away a second baseman named George Anderson to get Golden, Rip Repulski and Gene Snyder from Philadelphia. Anderson played in only one major league season. He went into the Hall as a manager. He's better known as "Sparky." Golden was taken from the Dodgers by the Houston Colt 45's in the 1961 expansion draft, and they later dealt him for a 36-year-old Nellie Fox. 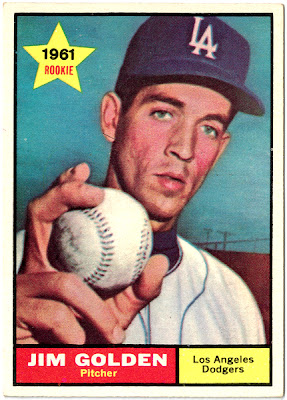 It should be obvious, if you've been paying any attention around here lately, why this card is showing up now. Gotta be one of the all-time great Getting a Grip cards. But there's a second reason, as well. (This is called a segue.) You're seeing the first of around fifty '61 Topps cards that I recently picked up, which I'll be showing in the days to come, cuz that's what you do when you have a card blog.
Posted by petethan at 9:52 PM

Email ThisBlogThis!Share to TwitterShare to FacebookShare to Pinterest
Labels: Getting a Grip, Mini-Collecting, PWMD