This is Part V of a series (and a contest) that was introduced here. 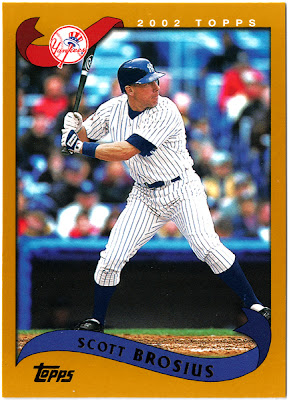 I was watching Game 4 of the '01 World Series in the living room of my Brooklyn apartment when Joe Buck and Co. made a big deal of the clock striking midnight and the calendar turning to November. The events of 9/11 had pushed the schedule back by about a week, giving us post-Halloween baseball for the first time. The D-Backs had brought in their closer, Byung-Hyun Kim, to protect a 2-0 lead in the ninth. But with two outs and Paul O'Neill on base, Tino Martinez had hit a dramatic game-tying home run. Now Derek Jeter was being proclaimed "Mr. November," following his walk-off homer in the tenth. I was excited to know that I'd be going to Game 5 later that day, but also a little disappointed that I hadn't been at this historic contest instead. I mean, it couldn't happen again, right?

I'd been out of work for a while, as I was one of the 8.7 billion people who had been working at an internet startup around the turn of the century. Before that particular bubble burst, however, I had been working with a great group of people at the ill-fated Acurion in the SoHo area. One of those people was a programmer named Tony, who was not a baseball fan, but had somehow found himself in possession of two tickets for Game 5 at Yankee Stadium. Remembering that I was a baseball nut, he chose to invite me along, rather than take his wife with him. Great guy. If you're out there somewhere, Tony, thanks again!

We were still just about six weeks removed from 9/11, and the World Series is a seriously high-profile event. We'd gone through that anthrax thing in recent weeks, as well. So it still wasn't the most comfortable feeling being what felt like a potential target. But the added adrenaline served to up the ante for what was already about as exciting as it gets, a World Series game at Yankee Stadium. This is still the one and only World Series game that I've had the chance to attend. And it certainly didn't disappoint.

You know the story, so I won't go into a blow-by-blow account. Just finding myself sitting there with the same situation that had presented itself the night before was surreal enough. Tony and I were both sure that there wouldn't be the same kind of payoff, though. Jorge Posada had doubled to start the ninth with the Yanks down 2-0, but he was still standing at second with two outs.

We were seated in the left-centerfield bleachers. The ball sailed in our general direction off the bat of Scott Brosius. We were able to watch its flight, and at the same time see Brosius thrust his hand into the air as Byung-Hyun Kim dropped into an astonished and dejected squat on the mound. It was truly unbelieveable. That crowd went utterly and completely nuts. The world's insanity was pushed aside entirely in favor of pure joy and wonder over a kid's game. That's the kind of power baseball has.


The rest of the game played out a little differently from the previous night's. It took the Yanks until the twelfth inning to complete their second miracle comeback in a row. This time it was once and future Yankee hero Alfonso Soriano driving in the winning run. The team of destiny, America's team (at least for a few weeks), would be heading to Arizona in the driver's seat, up 3-2 in the series. There was no stopping them, right?

Well, that part of the story doesn't have a happy ending, although it did have the virtue of being as improbable as the rest of the series. The 2001 Fall Classic was the perfect cure for what ailed us.

As for the Surreal Seven contest, this game was the gimme. I had already talked about it briefly on this blog in a Feeding the Habit post that included a nice card of the embattled D-Backs closer from Korea. Strangely, one of my most reliable regular readers, Nick (get a life!), didn't come up with this one. But Al and Bo hit the mark.

The mysterious Al Kawamoto, hockey fan, maintains his lead in the Surreal Seven standings with two games to go. It's an exciting race, with Bo picking up a victory to keep pace at one guess behind. Can Nick or Marcus mount a comeback and set up a tiebreaker scenario using difficulty points? Is there time for Bo to leap ahead of Al in the standings, or does Al all but insure victory by correctly guessing game number six? Stay tuned for all of the excitement of a pennant race (or at least a game of checkers).
Posted by petethan at 9:02 AM