I'm getting together pages to warehouse my mini-collections. I sort all of my cards into alphabetical order by player, so my mini-collections are virtual. You can view the first of these by going to the Mini-Collections links on the sidebar, or by taking this handy shortcut.

Putting together the Getting a Grip collection page, I realized that there's another specialized subset in this collection. It's not uncommon to see cards with more than one pitcher showing a grip, such as this one: 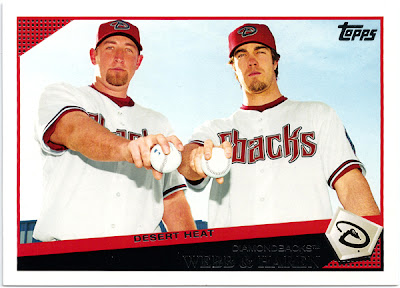 That's really nothing different, though. Just posing with a grip, the same as it would be if only one player were pictured.

However, there's something different that can happen with two people on a card: 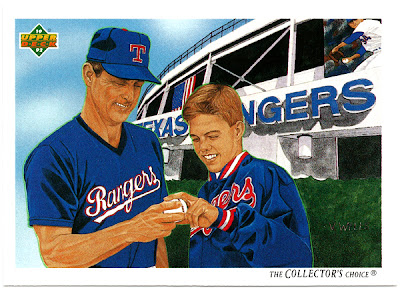 Two people, one ball, two grips. Odd. Random. Cool. In fact, all three examples that I've found so far are really cool, in their own way. That artwork of Ryan showing a kid how to grip the ball is priceless. It's the kind of card I would have scoffed at as a kid. It would have smacked of the uncool. But as those of you with kids are probably reminded on a regular basis, you lose your cool when you become an adult. Or at least it becomes somewhat inverted, so your adult cool has little to do with your childhood cool. That's what's happening here.

But this is something else entirely: 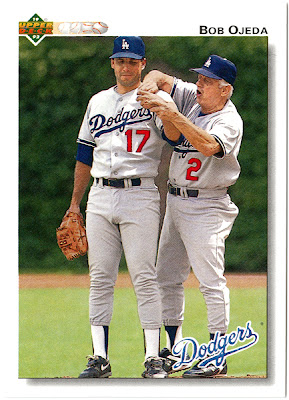 This card just cracks me up. You have to remember that I grew up watching Tommy Lasorda's act. The guy was a real piece of work. Here the old lefty pitcher (0-4 lifetime major league record) is trying to show 12-year veteran Bobby Ojeda how to pitch. The best part about this is the bemused look on Ojeda's face. Lasorda's his manager, so he can't just tell him to buzz off. But you know he wants to. You can see it in his face. 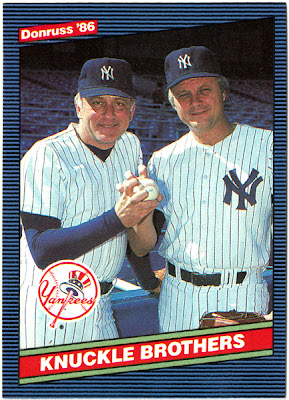 This one has a couple of great things going for it, in addition to its qualification for Getting a Grip. It celebrates the knuckleball, the great circus pitch that turns big-league hitters into clueless amateurs. The other, of course, is that it's about family ties, which are always fascinating to baseball fans. Most of us would have loved to be good enough at the game to be paid to play it, but the odds against possessing the skill and experiencing the good fortune necessary to make that a reality are long, indeed. That a pair (or more) of brothers, or a father and son (and perhaps a grandson or two) manage to accomplish the feat is a thing of wonder. Fabulous card, happily included in Getting a Grip.
Posted by petethan at 5:04 PM

Email ThisBlogThis!Share to TwitterShare to FacebookShare to Pinterest
Labels: Getting a Grip, Mini-Collecting