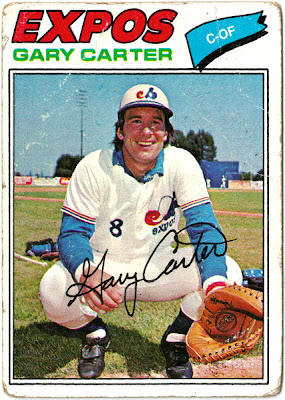 Can't go wrong with "The Kid," and the Night Owl hooked me up with both his '76 and '77. Gotta love those Dodgers. (What, am I the only person in the world who considers Gary Carter a Dodger?) 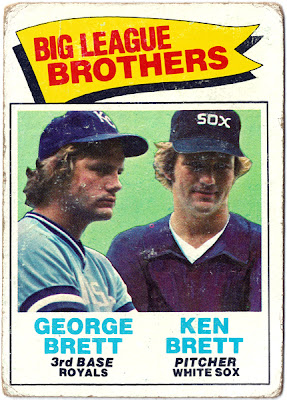 I dig this card because my Cousin Craig (he of "Craig's Gifts") played against both brothers when they were at El Segundo High School in Southern California and my cousin was at Palos Verdes. The closest I came to such a brush with greatness was playing little league with a guy who's family was tight with Dodgers catcher Steve Yeager (as much as such a story from a 12-year-old boy can be believed). 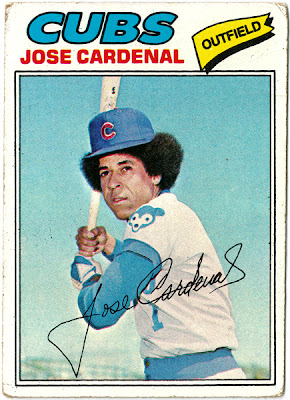 Oscar Gamble gets all the love for his gravitationally-endowed '70s afro, and rightly so. But don't sleep on Jose Cardenal. He gets bonus points here for the cub on his shoulder, which, with a little imagination, can be seen as a hairy echo of the man in the uniform. I have a question. How did these guys keep their caps on? Did they use hairpins? And what kind of nightmare hat-head did they sport when they tipped their caps? I really missed out by not closely observing the game until the dawn of the '80s. 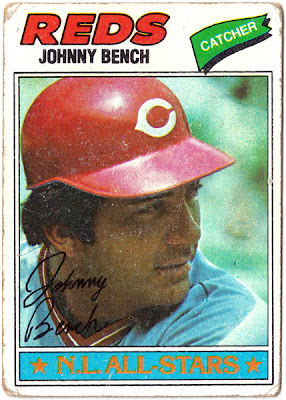 This is the card that set me down the path toward becoming the pleased and privileged possessor of the Night Owl's stash of '70s Topps fun. That's because it's the first card he showed when he offered 'em up, most appropriately in a post titled Random Thoughts Presented Randomly. I'm telling you, Power of the Random, man. Don't underestimate it! I'm not often quick on the draw, but I sure picked the right time to be on the ball in this case. 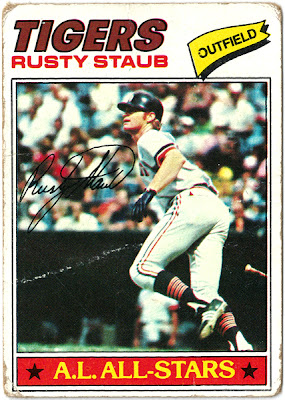 I wish I had seen Le Grand Orange play before his nickname became an all-too-accurate description of his, let's say, atypical body type for a professional athlete. From card-back cartoons, we know that Rusty was a gourmet cook. Maybe he still is. I was actually kinda surprised to see that he's still alive. I don't remember seeing him in any capacity since his retirement. I hope that's simply because he's enjoyed his post-baseball life out of the spotlight. He seemed like a nice enough guy. 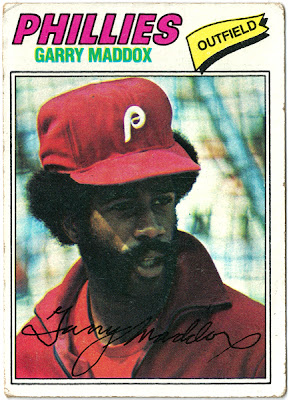 Massive maroon overload and another fabulous afro, courtesy of the Secretary of Defense. I could have sworn that he was also known as "Daddy Longlegs" as well, though I can't seem to find any reference to that with a lazy, cursory internet search. Maybe I'm thinking of someone else? 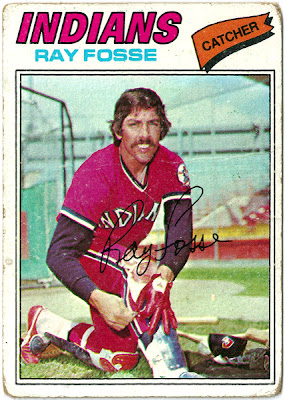 Great card for a number of reasons, to wit:  1) Fosse was excellent catcher with an unforgettable history (he's the guy knocked silly by Pete Rose at the plate to end the 1970 All-Star Game, in the off chance that you weren't aware);  2) Gotta dig the monochrome pink uniform. I always see these referred to as red, but to my eyes there's no question that they're pink. Is it just me?;  3) It's a card of a catcher donning the proverbial "tools of ignorance." And it appears that he's really getting ready for some kind of action, unless his acting skills are such that he's elevated a standard pose to something unusually realistic.

This edition's cartoon comes from the back of Barry Foote. 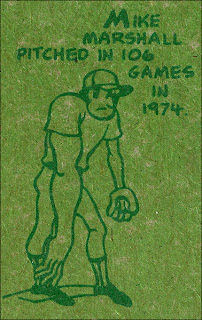 Can't go wrong with a Dodger-themed cartoon. And the Dodgers' first of two Mike Marshalls certainly was impressive for his endurance. For those of you who don't know much about Dr. Marshall and his expertise in Kinesiology as applied to pitching, he's certainly worth a moment's investigation. Though, to my knowledge, his arm never grew to quite the proportions indicated above...