This is Part IV of a series (and a contest) that was introduced here. 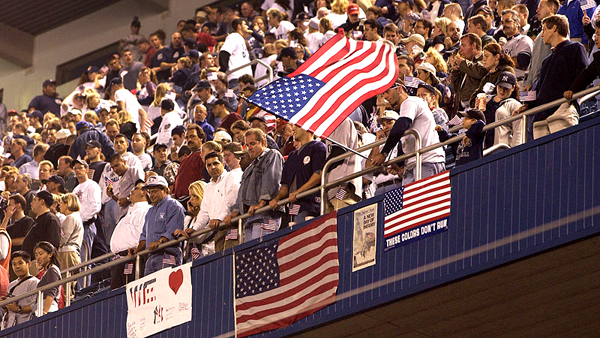 It started raining Monday afternoon, September 10. But, along with 50,000 other fans, I expected, or at least hoped, that it would let up enough to get the ballgame in. It was the kind of game you don't give up on lightly. The race for the division title had long since lost any drama. But even with the Red Sox thirteen games behind the Yankees, any visit by their arch rivals to Yankee Stadium was an event, and this was to be the last such opportunity of the year. Making things even more interesting, longtime Boston ace Roger Clemens was to take the mound for the Yanks that night, trying to improve his record to an unprecedented 20-1. 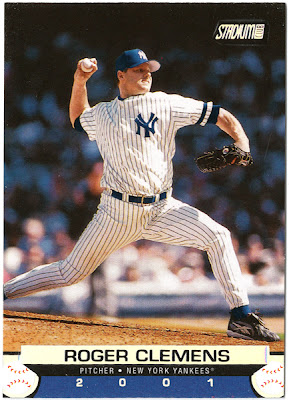 But the rain didn't let up. After two soggy hours of waiting, the game was called.

Games between the Yankees and Red Sox routinely last four hours or more, so even with the long wait in vain for baseball I got home a good deal earlier than expected. I was between jobs at this point in my life, but I had a fairly consistent daily routine. And the earlier-then-expected night meant an early jump the next morning. Each day I would hop on the subway from my apartment in Park Slope, Brooklyn, and head to downtown Manhattan to go to the gym, followed by coffee, bagel and the New York Times on a park bench facing the Hudson River. The subway exit was in the basement of the World Trade Center. The gym was two blocks away. The park bench was in front of the Winter Garden. None of those things would exist by the end of the day.

I was in the shower, getting ready to slip into this familiar routine when my roommate started knocking and shouting something through the bathroom door. I was out of the shower in time to see the second plane hit the World Trade Center on television. Like most of the rest of the world, I spent the day watching the events unfold on TV. It wasn't long after the towers collapsed that the ash began to accumulate on the building entrance's awning outside of my second-floor apartment window.

A lot of people had it much worse that day, obviously. My best friend had to dodge flying airplane parts as he was fleeing from the building when the second plane hit. He and I were both lucky compared to thousands of victims and their families. But the following days were very strange times to live in the City. When they finally resumed flying, airplanes in the sky brought with them a sense of anxiety. Being underground in the subway was no longer a comfortable feeling. But sitting around indoors was also nerve-wracking. By Thursday night, I had to do something, so I volunteered at a staging area for emergency food and supplies in Bryant Park. But by this point it was becoming clear that it was highly unlikely that survivors would be found, so there was nothing at all to do during my overnight shift.

It felt at the time as though there would never be a return to normalcy. Baseball was very welcome when it resumed. I wasn't there at Shea Stadium when the Mets went back to work. In light of Pizza's historic homer, I naturally wish I had been. But when my friend Kevin said let's go when the Yanks come back, I was wholeheartedly in.

I wasn't a Roger Clemens fan at the time, and my opinion of him today wouldn't be surprising to anyone. I wish this story involved someone worthy of respect and admiration, instead. But that's life. And it didn't get much more real than 9/11, so I suppose it's appropriate, in a way. 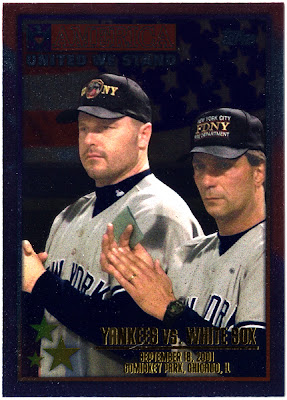 Clemens had won that 20th game the week before in Chicago, and was on the mound to face Tampa Bay in the Yank's return to the Stadium. Security was high. Everyone was searched thoroughly. Police were everywhere, firearms prominently displayed. I've been to games where there's a buzz in the stadium because of circumstances on the field. On this night, the buzz was simply about being there, about being anywhere in public with a large crowd at a high-profile event. It may seem somewhat silly now, but it really felt like there was some risk involved in being there.

The game itself didn't go well for the home team. Hal McRae's Devil Rays scored two runs in the first, and behind Tanyon Sturtze they never looked back in a 4-0 win. But, of course, this was another of those rare times when just being there was bigger than the game. And victory, of a sorts, did come in the seventh inning when the score between the Red Sox and Orioles became final. The 12-7 Boston loss clinched the American League Eastern Division for the Bombers. The Yankees were going to the post season. Everything was back to normal. Almost.

As for the Surreal Seven contest, we ease our way into a leaderboard. I would be hesitant to award Al a victory here if it were going to effect the final standings, because he's a little vague with his guess of "9/11 New York." In fact, if I were a betting man, I'd say he most likely had the Piazza/Mets game in mind. But, like I said, it's not going to effect the final standings, so I'll happily award a win, just to get the leaderboard up and running:
Congrats to Al for getting on the board. Now that the ice is broken, I have a feeling we're gonna see some action in the final days of this contest. And, speaking of contests, stay tuned. More free cards a'comin'.