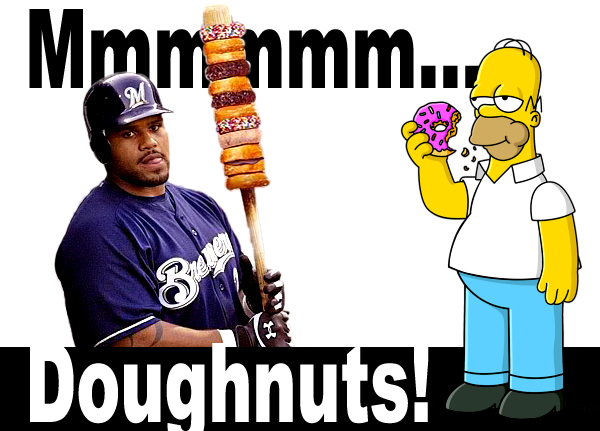 I'm getting hungry. It must be time for the fourth and final Mini-Collection Guide. Mmmmmm... Doughnuts! 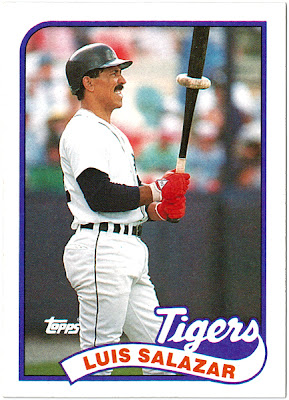 You know what they are. Bonus points if the player looks like he's gazing longingly at said doughnut, like Luis Salazar, here.

As per standard operating procedure, let's take a quick look at what is not a doughnut, for the purposes of this collection. The idea behind the doughnut (invented by Yankees catcher Elston Howard) is to allow the batter to swing something heavier while warming up, which (it was thought) has the effect of speeding up the bat when it's time to step into the batter's box. This idea has been achieved in different ways throughout baseball history, including long before Howard's yummy invention.


The Babe must have eaten them already. Swinging multiple bats was the typical approach of ballplayers of yore, as much to show their virility, no doubt, as to achieve any useful effect. But without doughnuts on the bat, you don't get into this collection, even if you're Babe Friggin' Ruth.


The "sweet spot" (bad pun intended) for for doughnuts is likely to be from about the mid-'60s to the mid-'90s. Modern times have seen all kinds of crazy gadgets butt in on the doughnut's action. These things being used by Kendall and Thome are not doughnuts. They're more like the last few bits of gyro meat left on the spit. Yummy in your own way, but not doughnuts, so no mini-collection for you!


Doughnuts, Damon. Not pancakes. Kinda ghetto, isn't that? This is the big leagues, son. Get the clubhouse boy to make a trip to Sports Authority, or something. Come on. (And tuck in your pocket. Jeeze.) 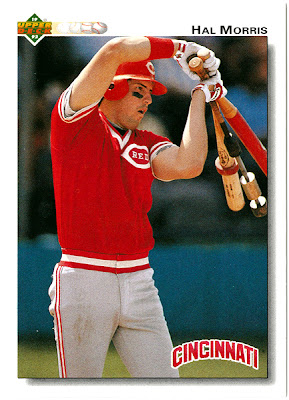 Good lord, what is this mess that Hal Morris has going? Who does he think he is, a modern Babe Ruth? We've got a bat wrapped in a red plastic/rubber substance, some sort of piston or something (I'm not mechanically inclined), and... wait... a good ol' wood bat with a doughnut! So Hal makes the collection, after all. Jeeze, he didn't really have to try so hard. 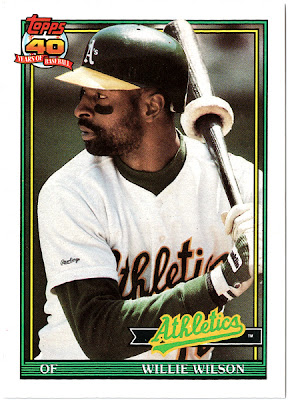 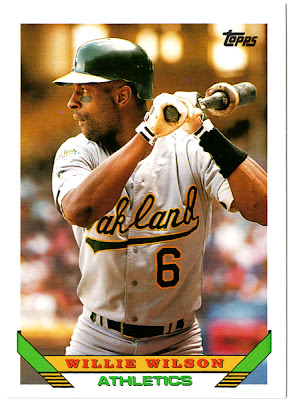 I'm a repeat doughnut offender. Apparently so is Willie Wilson. How come I don't have his physique!? 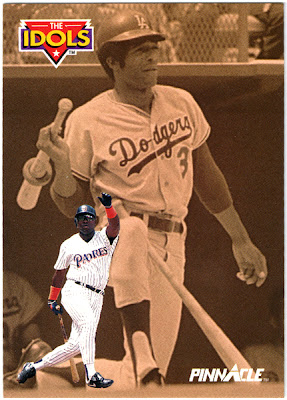 Finally, we see Tony Gwynn swinging and missing, which has stunned him so much that he's daydreaming in sepia about the '70s. Wrong timeframe, Tony. Fortunately, Gwynn (who ended up looking like another big fan of the doughnut by the end of his career) has the good sense to conjure up something worthy of this mini-collection. Serious bonus points for a Dodgers all-time great.

As with the others, this entire collection can be found on the sidebar (or by being lazy and clicking... here). I've set these up so that players are in alphabetical order within each section of the mini-collections (except for the finite 42 Grandfathers). This will make it easier to check to see if I already have a card in the collection that you are thinking about sending my way. I'm just starting to find these things within my own collection, though, so you'll see these things filling out pretty quickly. One rule of thumb: if it's from a Topps base set, any year from 1980 onward, there's a 99.9% chance that I have it already.

Oh, and I'll be waiting for the hero who delivers the holy grail: real doughnuts appearing on a baseball card.