Feeding the Habit: Taking a Hit (or Two)

It's been a while since the last edition of Feeding the Habit. But, rest assured, the habit has not been going hungry. Nor have I lost my enthusiasm for Card Nights filled with random pack-busting goodness. But after a while I came to realize that, just maybe, you don't all want to see every little piece of junk wax that still (perhaps inexplicably) excites me.

This last weekend was a little different, though. In addition to the usual fun and quantity, there was the unusual element of quality. I'm not one of those collectors who's all about "hits," by any stretch. But that definitely doesn't mean I don't enjoy them when they come. We'll get to some "serious" cardboard before this post is over, but for now, let's play... 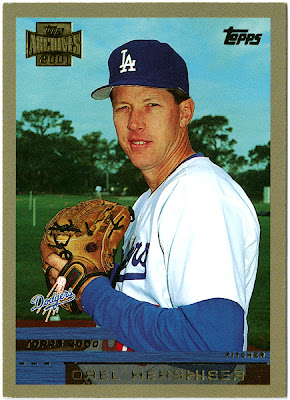 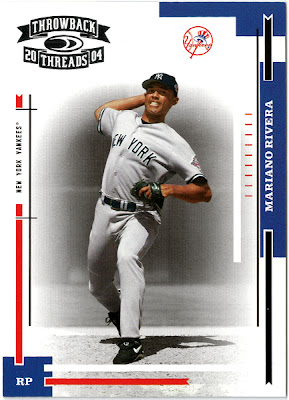 Reprints of cards that are only a year old crack me up. "Hey, remember this card... from last year?" Ah, the nostalgia. Of course, when it's the Bulldog, you can print the same card every year and I'll happily add it to the collection. I also got an Archives copy of a '73 Blyleven, which satisfied the vintage reminiscence jones. (Proofreader's note: Do you capitalize "jones" in this context? I am ignorant of the origins of the term "jonesing." If only there were an Internet or something to help me out. But I ain't got no time for learnin' right now, I'm playin'.) Anyway, also dig the dynasty-era Mo. Don't see many of those in dollar repacks.

Moving on to what I believe is essentially the end of the vintage from the Random Guy Box. (Don't know what I'm talking about? That's what the archives are for. And shame on you for not hanging on my every word.)  I was expecting the crap condition... 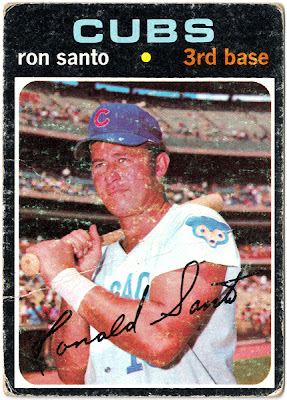 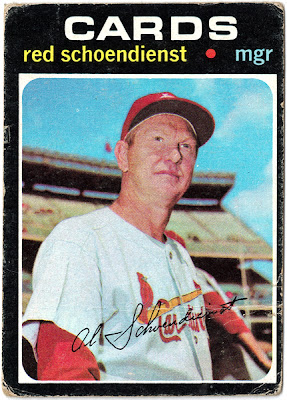 But was not expecting Hall of Famers. These are two of the most beloved and respected baseball people from the baseball-crazy Midwest. I also found a second copy of the '71 Hoyt Wilhelm in the box, just as ratty in condition as the first, but welcome nonetheless. I'm no snob when it comes to sweet cardboard.

Popped open a couple of packs of '07 Upper Deck from the discount bin. Not UD's finest effort, but... 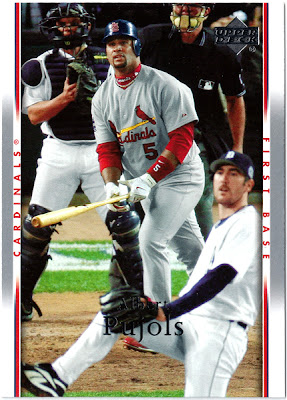 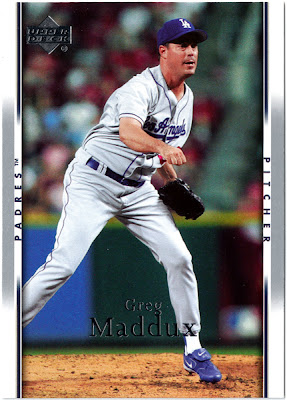 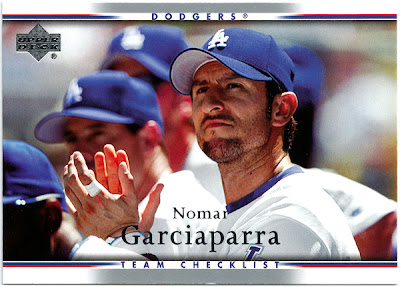 Nothing to complain about here. I'm all about the pitchers, but I've never really cared for Verlander. I prefer my players with a touch of humility. (Maybe he's picked up a bit of that quality this season.) So that friggin' sweet looking card of The Machine in his Cardinals glory taking him deep works for me. Did anyone notice the word "Padres" on the Maddux card? Me neither, this is a Dodgers card, even if my OCD requires me to identify it "properly" above. Then there's Nomar. Not the best of times for the Dodgers, but not the worst of times, either. And I'm glad Nomar spent some time in Dodger Blue.

There was a serious Yankees tilt to my weekend. 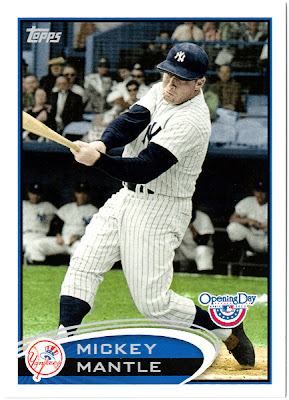 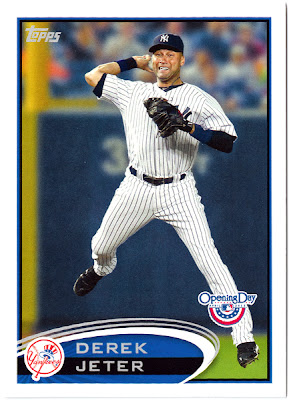 A couple of packs of '12 Opening Day yielded these two fine Topps redundancies, and I also got Mariano, Mark Teixeira, and Brett Gardner.

The Captain showed up back-to-back in a Gypsy Queen pack from a discounted '12 blaster I was happy to pick up. Somehow he manages to change from his road uniform into pinstripes by the time he reaches the bag. That's the power of Derek Jeter. 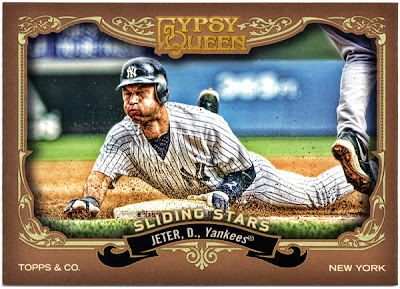 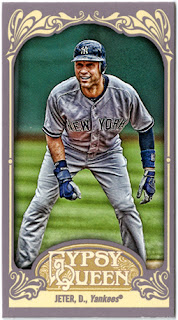 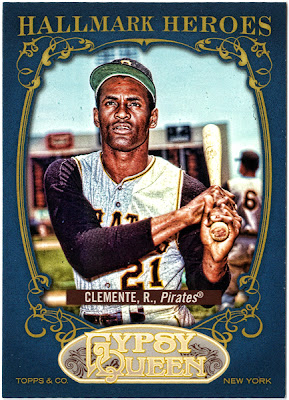 Clemente brought up the rear in a very satisfying pack o' cardboard treats.

A lot of 2010 Topps is showing up for me lately in both repacks and boxes of discount packs. I was happy to nab a couple of inserts that I not only didn't have, but that I'd somehow managed to avoid having ever seen. 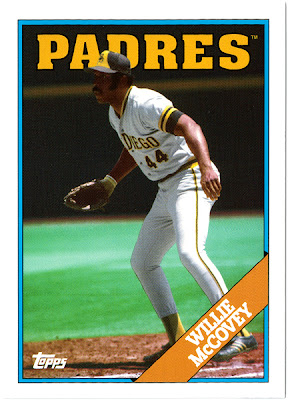 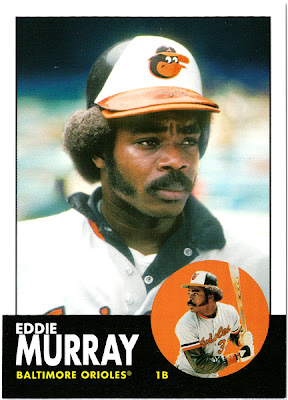 Neither quite does the job of replicating the original designs. I guess fonts are more difficult to duplicate than I would have thought. But that's okay, cuz they're great cards anyway. Would have liked a better view of Stretch's face, but the rare Padres uni is a nice respite from the usual Friggin' Giants duds. The Murray card is simply bad-ass. This guy couldn't look bad on a card if he tried. (Let's just pretend that the back of his '92 Upper Deck Mets card never happened.)

Okay, from flippant fun we move on to serious fun. Warning: I'm gonna show 2013 cards. I'm probably the only blogger out there who cares to be warned about such a thing, so the warning is probably pointless. But there it is, anyway.

I finally got around to opening my patch card from a Topps series two blaster I picked up when they first came out. 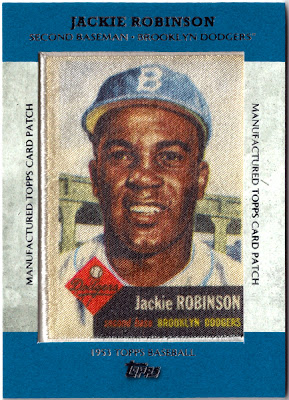 Best-case scenario. The scan makes it look weak, but it's actually pretty nice. Gimmicky, I know. But having different textures to enjoy on a baseball card is fun. When are they gonna get around to cards with different scents. We can't be ignoring any of the senses. And cards have frankly stunk since gum is no longer around to sweeten them. Am I the only one who wants a Darryl Strawberry card that smells like strawberries, and a Chet Lemon card that smells like lemons? Just keep Rusty Kuntz out of that set, please...

I really like this year's Panini Cooperstown set. The placement of the HOF logo was a sneaky way to help with the team logo coverup mess. I think it's a surprisingly effective solution. 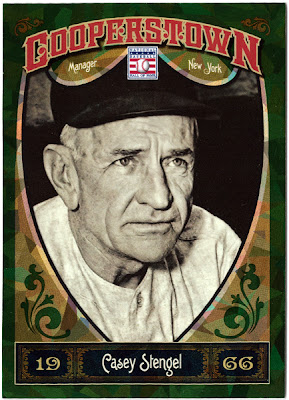 I really enjoyed pulling this card of the Ol' Perfessor in all of his wrinkly glory. And green is my favorite color for sparkly/shiny card borders. My smile was only slightly diminished when I saw over at Night Owl's blog that I could have pulled a Vin Scully instead.

Speaking of my Dodgers, though... 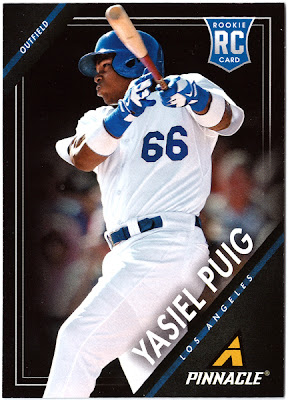 My first Puig. I'm excited, but I'm probably one of the few (non-Asian) people who's more excited about our other international rookie import, Hyun-Jin Ryu. But this is a sweet card of the "Wild Horse," as Vin Scully has been calling him. One of the better looking cards I've seen from this set. (Though I'm not sure why they didn't keep his uniform number red.)

Those are cool cards. But I promised "hits." Let's talk about autographs for a second. I like 'em. I don't go crazy for them, but I certainly enjoy getting them when they pop out of a pack. I like them a lot more than a small swatch from some jock's crotch. (You never know exactly where those relics come from, you know.) And they almost make you feel like three or four bucks for a pack of four or five cards is an acceptable situation. 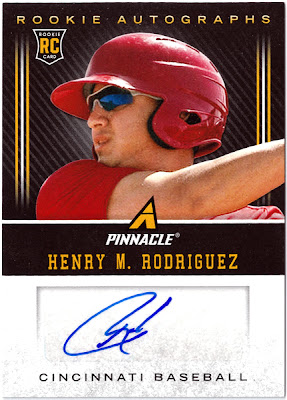 Yay! An autograph. Dude's a utility infielder. He's played in 18 games for the Reds over the past two seasons. He also has a Cubs pitcher of the same name to deal with (hence, the middle initial). Still, cool to get an autograph. Technically, that's a hit, even if it doesn't deliver much of a buzz.

The year-old discount card craze had me pick up a good deal of '12 Heritage, which is a set I like about 750% more than '13 Heritage. But since I wasn't thrilled with last year's Topps flagship, I wasn't in full collector mode the way I had/have been in 2010, 2011 and this year. So I'm playing catch-up with this set. Actually, waiting a year is probably always the way to go, since prices reflect our fascination with/need for what's new. Ain't gonna happen though.

I digress. Back to the hits. Ain't this one pretty? 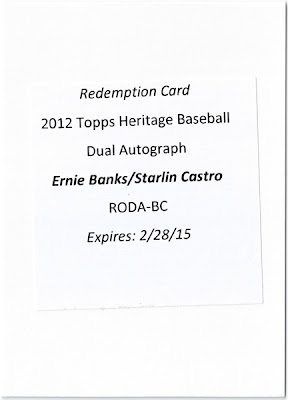 Well, it will be when I get it. This is my first redemption card. It's no Koufax/Kershaw, but it's a pretty sweet pairing nonetheless. Can't wait to get the card. I guess the first step would be to redeem this. Not sure why I haven't done that yet, four days after busting it out of it's pack. I guess I'm a bit stunned. Never got anything quite like this before. Which makes all the more improbable the fact that, on the same night, I pulled this... 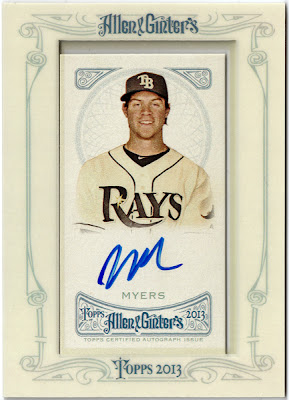 The probable 2013 AL Rookie of the Year. Not bad. I don't have a rookie fetish. And hitters lack the esteem that I bestow upon pitchers. But I can't ignore the fact that this is one of the bigger catches in this year's much-ballyhooed "chase." I guess I'm a serious collector now. (Not.)
Posted by petethan at 7:35 PM