I recently received my second trade package from Nick. It had a little bit of everything, and all of it to love. As he said in his note: "We Randomites have to stick together."

I used to watch classic television shows on Nick at Nite. One of those shows was Mr. Ed, about a talking horse. I once saw an episode of Mr. Ed that featured Don Drysdale.

Nick sent along a copy of this Drysdale card in his trade package. 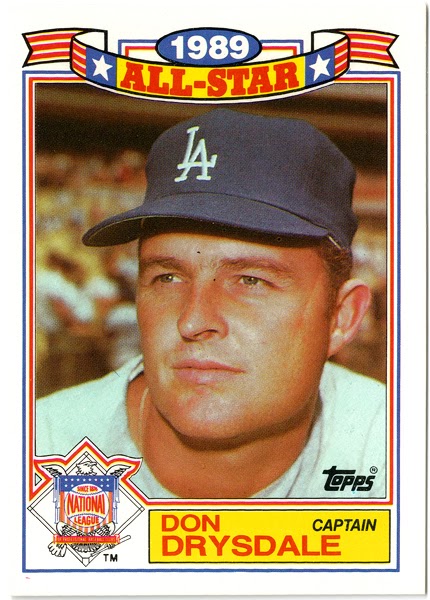 Saturday Night Live was also one of the shows that used to appear on Nick at Nite.

Speaking of night, Nick's Dime Boxes was one of the first blogs that I began to follow regularly before this half-assed attempt of my own. The other was Night Owl Cards.

Last Saturday night was a Card Night for me, and that's when I joyously opened Nick's trade package.

Howard Cosell once said, "Sports is human life in microcosm."

Nick's trade package is my baseball card collection in microcosm.

Nick is a college student.

The "Mount Rushmore" of my first childhood Dodgers teams consisted of their record-setting infield.

Nick sent me some great cards of those four players, among the gaggle of other fantastic cards. And I will now use that quartet to help introduce the contents of the trade package. 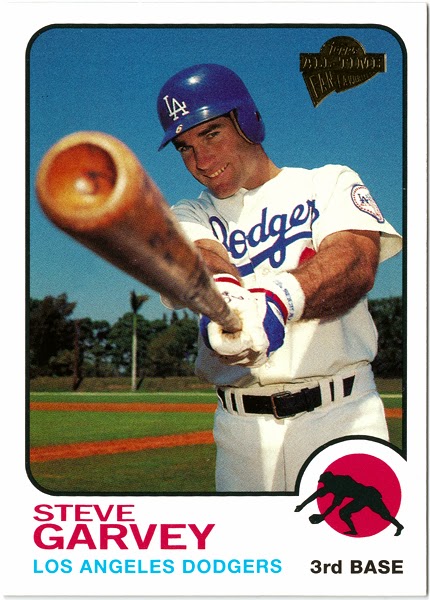 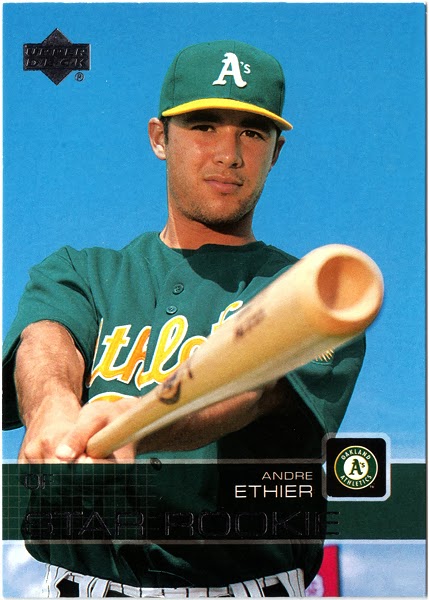 Talk about symmetry. These two cards arrived on this planet in the same year, although they depict players from very different Dodger eras. In some ways, I think Ethier is the best match for Garvey among Dodgers to come after him. They both have that clean-cut look that seems to draw in the female fans. And, especially in 2009, Ethier seemed to always get the big game-breaking hit, the way Garvey used to. As for the cards, they are two of the finest samples from Nick's "Bat Barrels" mini-collection. As I told him last year when I received my first trade package from him, I think it's cool to get cards from him that fit his collections. It's his calling card, and it gives a trade package a personal touch. 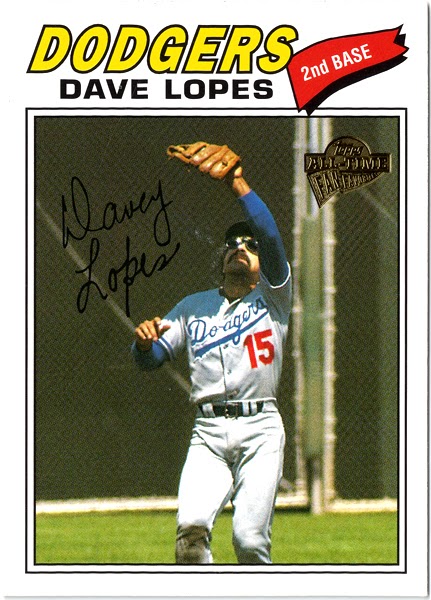 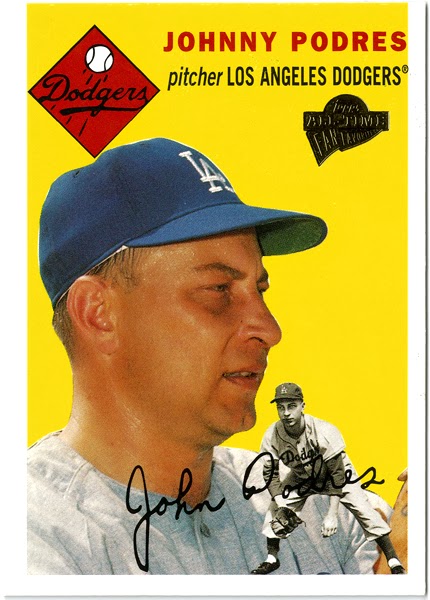 I love these All-Time Fan Favorites cards. And Davey Lopes certainly qualifies for me. He's my favorite of the infield quartet. I was thrilled when he returned to LA a couple of years ago as a coach. As with all of the players on the 1981 squad, I'll always have a special place for Lopes in my collection for being one of the players to finally lead the Dodgers to a championship over the Yankees after coming up short in '77-'78. If I'd been alive at the time, I would have felt the same way about Johnny Podres, who beat the Yanks in game seven of the '55 Series to finally give Brooklyn its first and only championship. 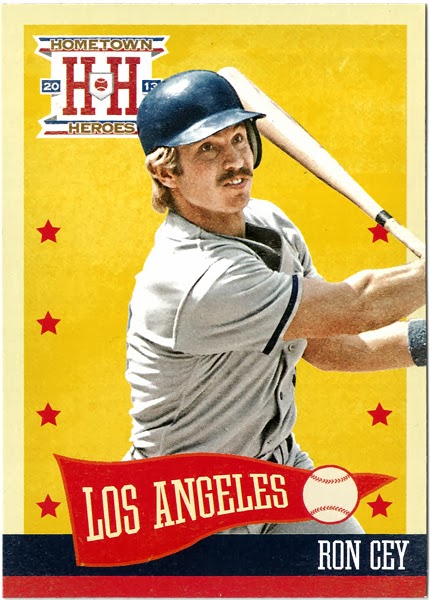 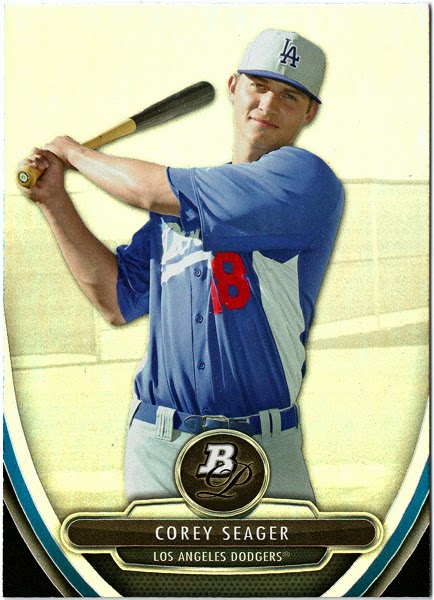 The Penguin, Ron Cey, shows up in one of my favorite sets from 2013. I wasn't aware of that until this card showed up in Nick's trade package. Though he was probably underrated at the time, in retrospect a solid argument could be made that Cey contributed the most out of the infield quartet to the Dodgers' success. He was certainly a stable presence for many years at the hot corner, something that the franchise has otherwise not enjoyed (Adrian Beltre, aside). Perhaps Corey Seager will someday add his name to the short list of long-time star Dodger third basemen. He's playing shortstop now, but he's a big guy with some pop in his bat, so a move is certainly possible. You just never know with prospects. 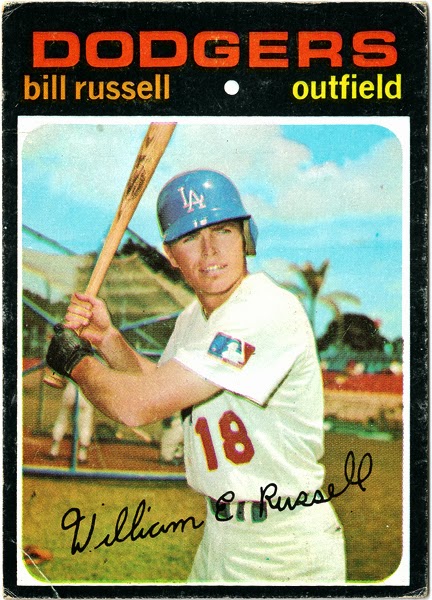 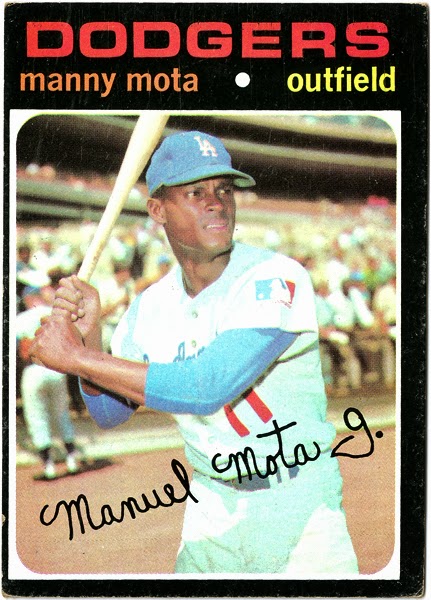 Take Bill Russell, here, for example. A 20-year-old outfielder when this picture was taken (1969, as indicated by the MLB 100th Anniversary patch), Russell would go on to become an all-star shortstop, the longest-tenured member of the Dodgers' record-breaking infield, and the man who would succeed Tommy Lasorda to become just the third manager in LA Dodger history. All of that from the least-celebrated of the quartet. Although he didn't begin his career with the Dodgers, Manny Mota also became a Dodger lifer. A National League All-Star for the Dodgers in 1973, Mota would settle into the role of pinch hitter, eventually setting a record in 1979 with his 146th career pinch hit. He would be named the club's hitting coach for the following season, and he remains an instructor with the Dodgers to this day.

Mota would have eight more pinch hit at bats for the Dodgers after becoming a coach, hitting .375.

This reminds me of another famous coach with the initials M.M., Minnie Minoso, who became the oldest man to collect a big-league hit at the age of 50 in 1976.

And that reminds me of the oldest player in major league history, Satchel Paige, who tossed three scoreless innings for the 1965 Kansas City Athletics at the age of 59.

Which reminds me of the big fish from my first trade package from Nick. It was a Satchel Paige card that I had bought on eBay for my Grips collection, only to be told that it had been listed in error so I wouldn't be getting it... until it popped out of Nick's package the very next day.

We'll be seeing Ol' Satch again as we continue to look at what Nick hath wrought. But I have a feeling there's a new big fish in town. You might even say a white whale. Stay tuned,