A few weeks ago I got an email from John of Johnny's Trading Spot (formerly known as "My First Blog"), asking if I'd like to do a little trading. Seemed innocent enough, so I said sure, why not?

A couple of days later an envelope arrived... then another... and a couple more... and yet another arrived last week  If I hadn't asked him to ease off the gas pedal a little bit, John assures me that a steady stream of similar envelopes, which are already packed up and ready to go, would have continued to flow in my direction. As much as I hated to slow him down, I'm a serious slow-poke when it comes to digging cards out of my semi-organized collection to send in return, and I get seriously neurotic about getting too far behind on my end of a trade bargain.

I managed to get one envelope out his way last week, and will be working to get others out as quickly as possible. Although I don't want to get too far behind, I also don't have the willpower to wait much longer to get at the rest of those cards he's got waiting for me. You're about to see why. 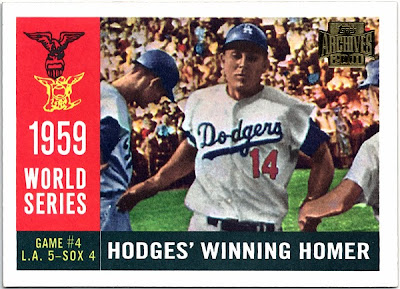 John's winning packages included this winning card, along with a sumptuous sum of similar Dodgers Topps Archives gems. And I love 'em. I will probably own the original of this card someday. Unlike some of the others ('52 Topps Hodges? Not gonna happen), this card is reasonably affordable. And it's special to me because one of the most important people in my life, my cousin Craig, was actually at that game. Until I come up with the real thing (and even after I do, for that matter), this is one happy-dance card that John managed to send my way. 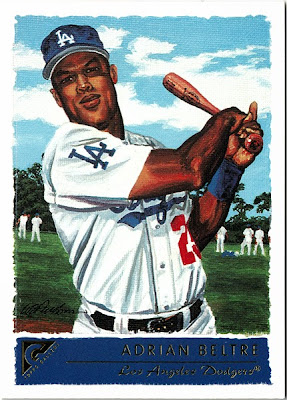 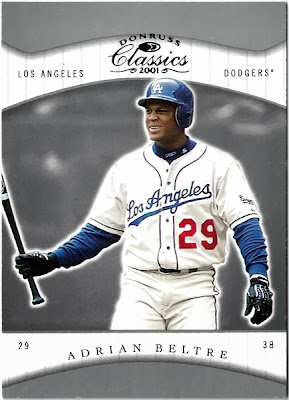 I let John know that I was like 99% of the collectors out there, in need of stuff between the junk wax era and about 2007. Players like Adrian Beltre, who debuted right after the junk era ended, have about a gazillion cards out there that I don't have, and have never even seen. Thanks to John, I can check these two off of the list that would have existed if I knew they were out there. 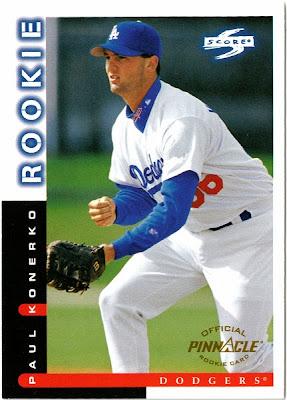 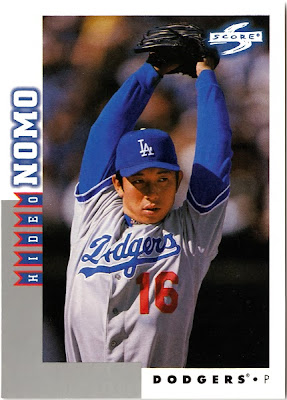 This year I've become a big retro-fan of 90s Score products, and these are no exception. Dig the colors and the dated (but interesting) card designs. More importantly, any card of The Tornado is welcome, as are Dodgers Konerko cards, despite the reminder of what might have been. 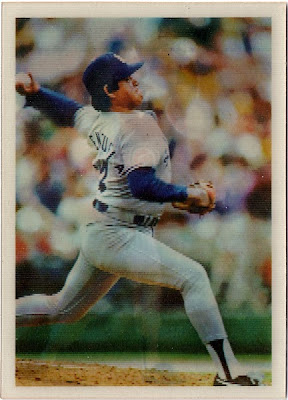 Going father back, John takes me back to my childhood. This blog is no Baseball Card Breakdown, but I'm pretty happy with the way this card scanned. Fernando is barely intruded upon by Rick Sutcliffe (though he does impose a Cubs logo on Fernando's sleeve as well as giving him a third leg...). 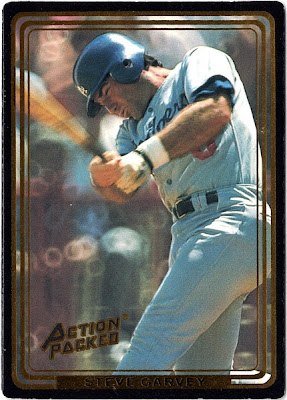 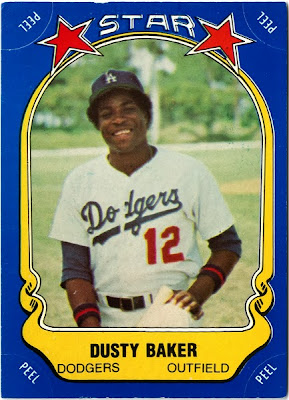 John sent me more heroes from the '81 Championship club. You never forget your first. I love those Action Packed cards. With all of the foil and refractors and sparkly parallels these days, something as old-school as embossed 3-D effects are a novel diversion. The Dusty sticker is sweet, too, coming from Fleer's first year back in the baseball card game. 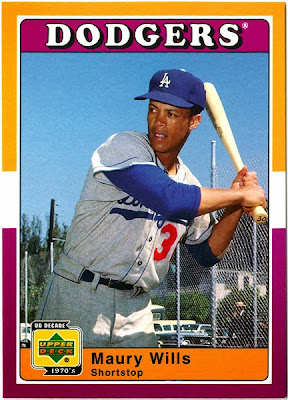 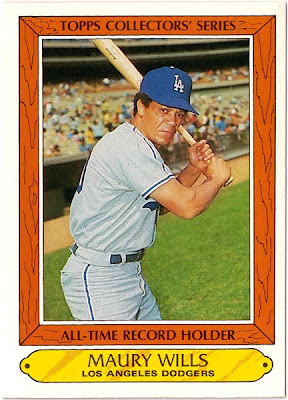 We slip further back in time with Maurice Morning Wills. The groovy thing about these two cards is that Upper Deck is celebrating the 1970s with that set, yet uses a picture shot in the '60s. The Topps card honors the records Maury broke in the '60s... and shows a photo from the '70s. Let's see if we can do something about that... 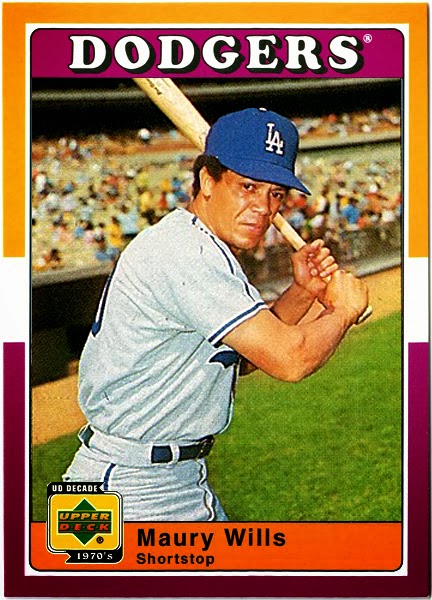 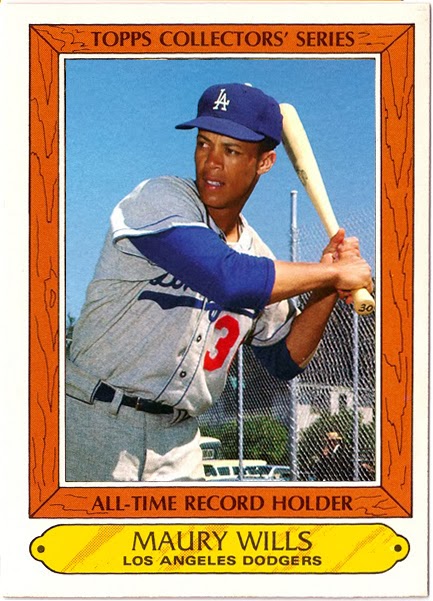 Back to the trade package. Let's wrap up the Dodgers stuff with a few more from the Archives. 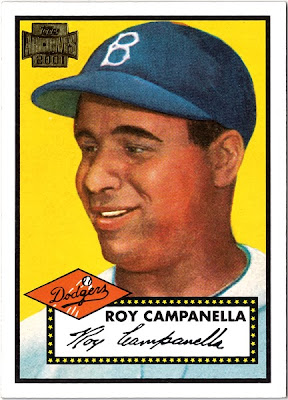 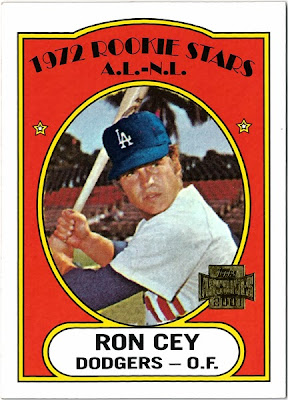 John sent a good chunk of these things, and I couldn't be happier. After all, am I ever going to own a '52 Topps Campy? No. Probably not. And I know I'll never have a '72 Topps card featuring just Ron Cey. Mine also includes Ben Oglivie and (the first) Bernie Williams. For collectors like me, who sort by player, and keep multi-player cards separate, these solo versions from Topps Archives are really nice to have.

John isn't just concentrating on Dodgers, though. He also shows he's got an eye for my mini-collections. As usual, and as it should be, the Grips are the stars. 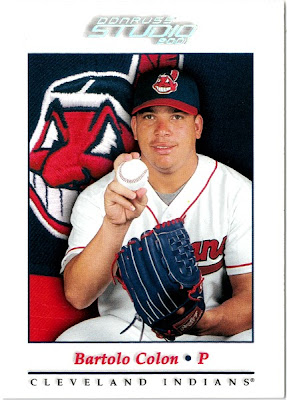 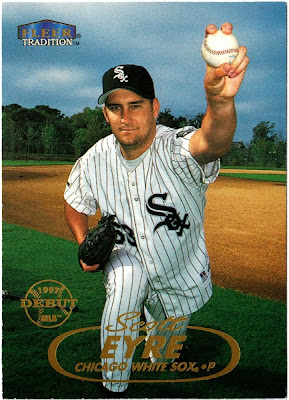 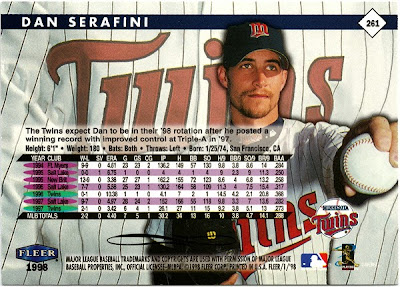 Chief Wahoo and I both approve of Bartolo's grip. You know Scott Eyre figured they'd be cropping out his untucked shirt. I'm glad they didn't. That's a top-notch addition to the collection. Dan Serafini also knows how to get that grip in your face. Nice stuff.

I'll be getting all of John's great mini-collection hits up on their appropriate pages later in the week, but we'll take a look at some more of the highlights here. 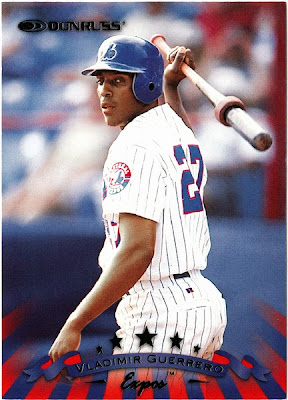 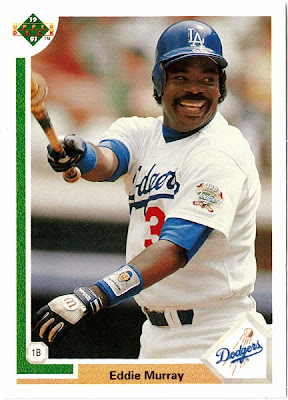 Mmmmmm... Doughnuts! John fed all four mini-collections, actually. That Vlad is great, not only for the doughnut, but also because I want any and all '98 Donruss cards, and simply because it's Vlad. And Steady Eddie's got a nice doughnut-eating grin going. 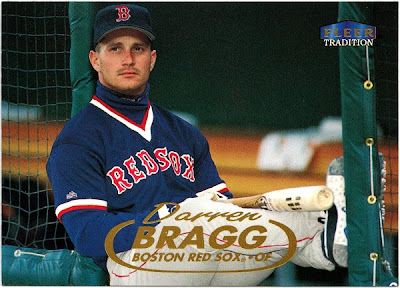 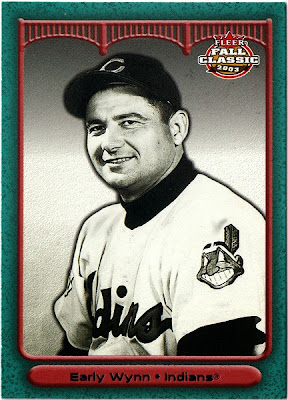 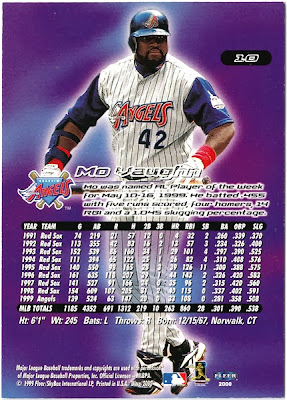 John's envelopes contained plenty of Turtlenecks, too, ranging from bench-warmers trying to keep warm themselves, to Hall-of-Famers like Early Wynn (who apparently didn't have quite so much neck to cover). Finally, there were a good number of Grandfathers from the 42 collection. Mo Vaughn makes for quite a sight in his Disney Angels uni against that bright purple backdrop, doesn't he?

The best part of John's attentions toward my mini-collecting habit, though, was the plethora of turn-o-the-century cards featuring the great Mariano Rivera. 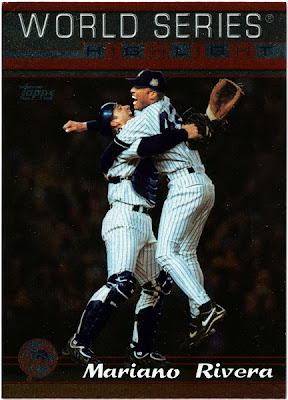 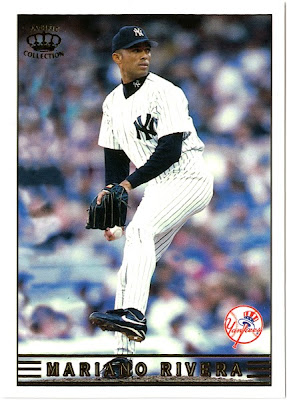 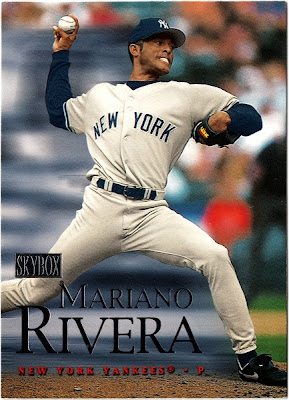 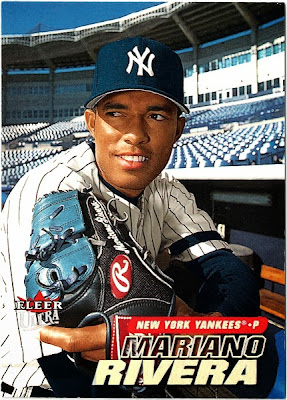 The pictures on the flip sides of these include a couple of 42s and a grip. But even if they hadn't, I would have been thrilled to receive these. Mo is high on my list of all-time favorite non-Dodgers. Never hesitate to send along cards of Mo, Jeter, David Wright, Bob Gibson, David Eckstein... hell, who am I kidding, send 'em all. I'll even take your Barry Bonds cards. Come to think of it, I got a couple of those from John for my mini-collections, as well.

I'd better get digging for more Braves, asap... 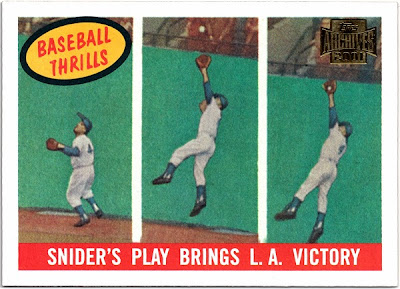 I know more thrills await me from the prolific trading spot. I can't wait! Thanks for these, John. Hope you find something to like in what I send your way.
Posted by petethan at 4:50 PM