Playing With My Dodgers: Wilson Alvarez

Has any pitcher's arrival in the big leagues been quite as odd as that of Wilson Alvarez? The Venezuelan native debuted for the Texas Rangers as a nineteen year old in 1989, the first player born in the 1970s to reach the majors. Given a July start in Texas against the Blue Jays, Alvarez failed to retire a batter. Junior Felix singled. Tony Fernandez homered. Kelly Gruber homered. George Bell walked. Fred McGriff walked. And Wilson Alvarez walked off the mound, not to return to the majors for two years.

When he did return, on August 11, 1991, he was pitching in Baltimore for the White Sox. This time he struck out the side in order in the first inning (Mike Devereaux, Juan Bell and Cal Ripken), and would go on to pitch a no-hitter.

Alvarez would have a fine career, going 102-92 with a an ERA+ of 112 in fourteen big league seasons. But that career would be interrupted by injury woes that would see him miss two entire seasons. After proving himself healthy with Tampa Bay in 2002, he would go on to sign three consecutive one-year free-agent contracts with the Dodgers from 2003-2005, serving as a dependable swing man. His velocity diminished, Alvarez reinvented himself as a control artist, posting the best walk rates of his career, by far, while in Dodger Blue. 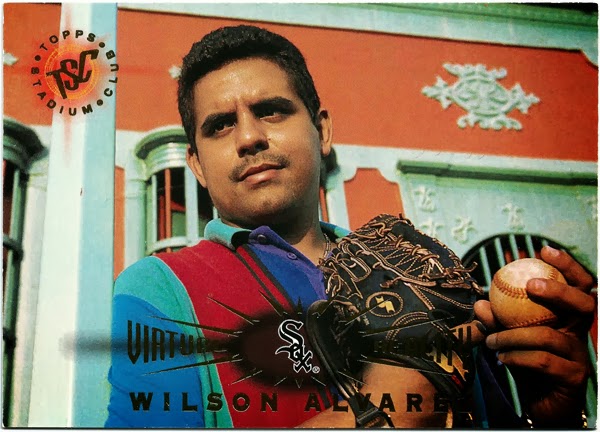 The funny thing about Wilson Alvarez's time with the Dodgers is that I can find no baseball card, or mention of the existence of any card, featuring the lefty during his three-year tenure in Chavez Ravine. And I'm not just talking about major releases. He doesn't even show up in the Keebler Cookies sets given away at the stadium. It's as though, once he arrived in Southern California, he feared his soul would be stripped from his body if were to appear in uniform on a 2.5" x 3.5" piece of cardboard. Realistically, it was probably one of those licencing issues that sometimes plagues collectors. Either way, bad timing for Dodger fans. In the absence of a Dodgers card for Alvarez, this Getting a Grip beauty from Stadium Club serves as a fine alternative for the PWMD set. If there is a card out there somewhere featuring Alvarez in a Dodger uniform, please let me know.
Posted by petethan at 3:35 PM