In this final look at the contents of an eagerly anticipated trade package from Nick of Dime Boxes fame, we see the many ways in which the best blogger in the biz managed to exceed all expectations.

I don't often throw out hints in the comments section of posts suggesting a new home (mine) for a card shown by a blogger. Considering the success stories recently outlined by the Night Owl, I should probably make an effort to get over that misguided attempt at politeness. And, in fact, I did. This was the result: It was the first card I saw when I opened the package, and it was accompanied by a note labeling it as a last-minute addition to be enjoyed. Your wish is my command, Nick. I enjoyed, enjoy, and will enjoy. Speaking of which... 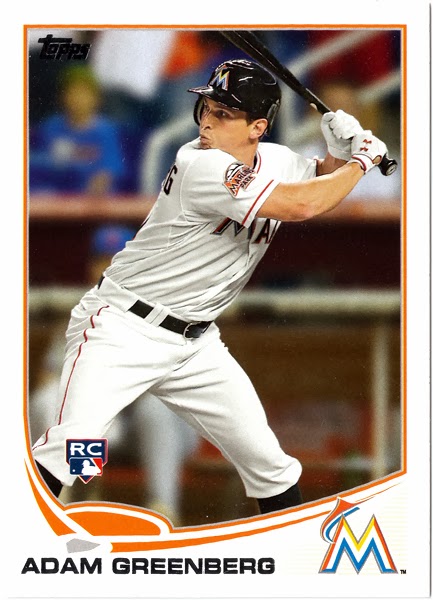 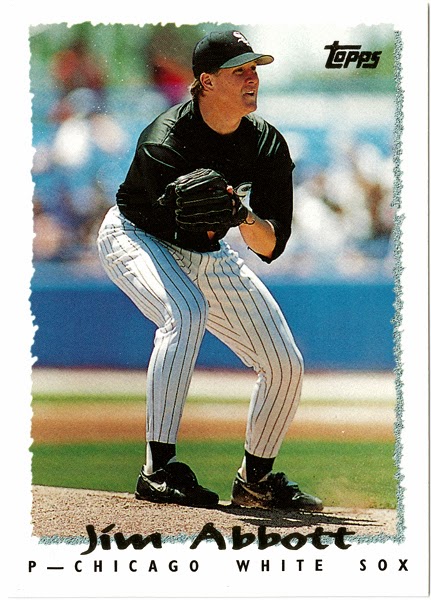 I can't help but enjoy the very first hits from my "Playground Necessities" want list! I don't have a lot of Topps flagship base set needs from about the dawn of the Reagan era, but these were a couple of them. Thanks to Nick, I can now say they "were" needs, rather than "are." The beauty of this pair is that we're looking at a couple of the best feel-good stories in baseball. In fact, the Greenberg card was Nick's favorite of 2013 for that reason. I was happy to be able to hook Nick up with a couple of versions of my own personal favorite (stay tuned for an upcoming post) in my return package. 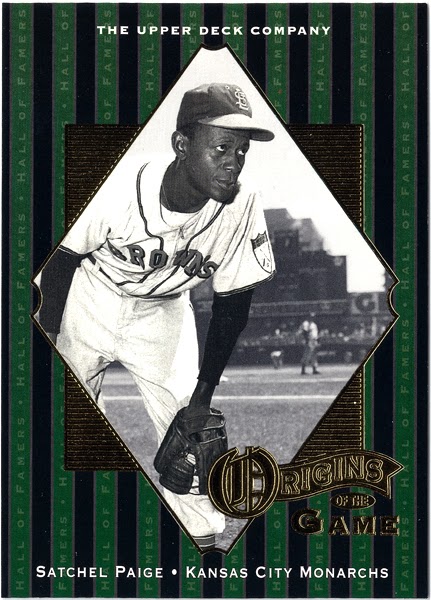 The highlight for me of Nick's last trade package was another Satchel Paige card. Two trade packages, two cards of Ol' Satch. I'd say Nick's started himself a tradition here. Can't wait until the only options left are vintage... (Just kidding, Nick.) (Not really.) 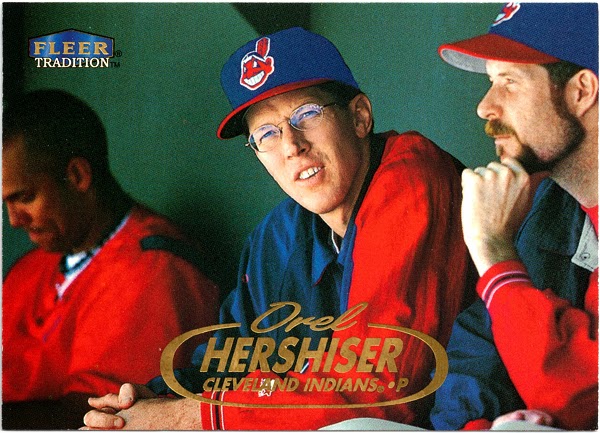 Nick also enjoys collecting cards of my favorite player of all time (until Kershaw brings a championship to LA, that is). Nick's enjoyment comes from the Bulldog's less-intimidating side. Hershiser was my first player collection because of his magical '88 season, in which he became a baseball hero to me. Nick collects what he calls "Nerdy Hershisers," the many cards in which the Bulldog looks more like a librarian. It's all good. Incidentally, I have a couple of mini-collections that I haven't told anyone about, mainly because I have a hard enough time keeping up with this blogging thing, as it is. But this cards makes its way into one of those. 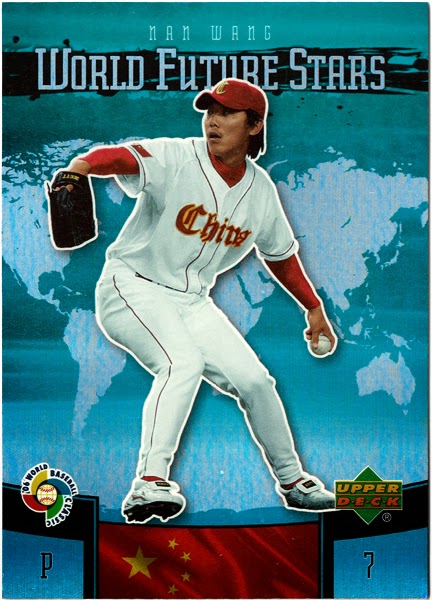 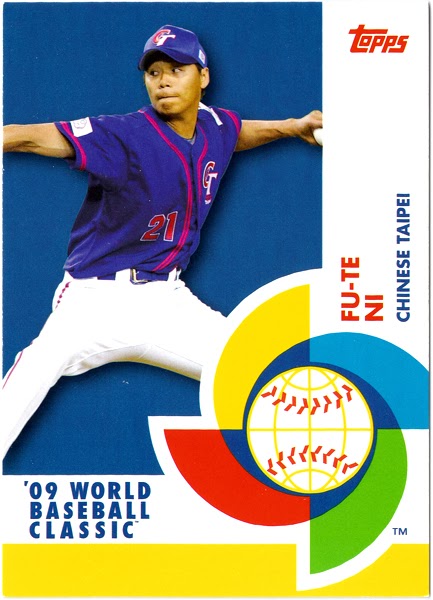 Nick also knows that I like WBC cards. I have the 2006 Upper Deck and 2009 Topps WBC box sets. But I have very few cards from the various insert sets that have been produced after each of the three tournaments. Nick sent me four that I can check off the list, including one of my favorite baseball names of recent years: Fu-Te Ni. I love that 2009 Topps subset, with the giant colorful logo. I'm not sure I have any of the others, since I bought the factory set in '09 (hint, hint). 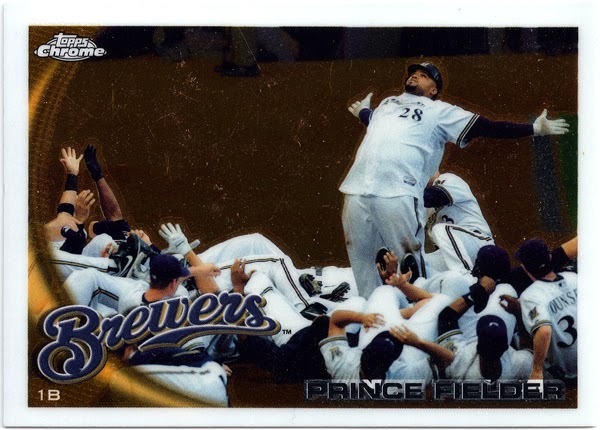 The primary way in which our tastes in cards overlaps is that both Nick and I enjoy cards that are a little out of the ordinary, for one reason or another. One form that can take is great photography, featuring shots that you don't see on lot of cards. This Prince Fielder knocking down the bowling pins homerun celebration from 2010 Topps certainly qualifies. And it looks great in the Chrome version because the gold color matches really well with the Brewers' barley-sprig beer-brewin' color scheme. 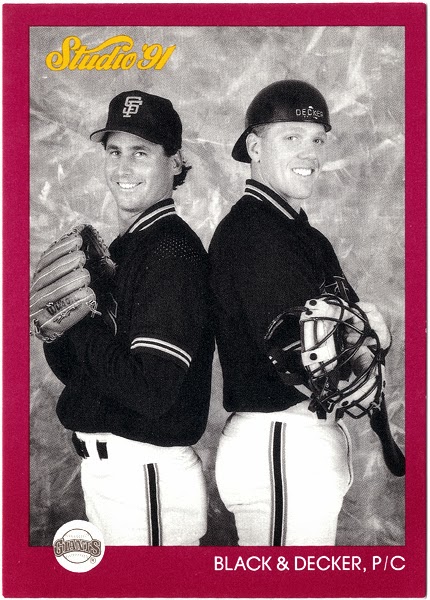 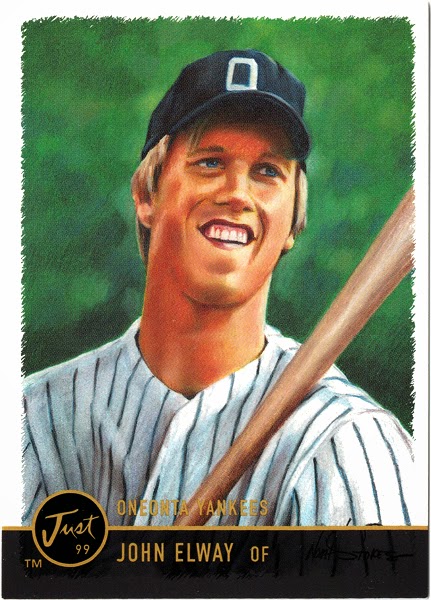 The other way in which the Power of the Random makes itself felt in the card world is with unusual content. Fleer went with "Black & Blue" back in '84, when the current Padres manager was a teammate of Vida Blue. The Donruss/Leaf people went in another direction when opportunity would again strike. Meanwhile, the Elway card is timely since I recently learned that the Super bowl is coming up (which, to me, just means baseball season is getting close!). Apparently the Broncos are going to be in the Super Bowl. Considering that John Elway is the most recent player that I know to play for the Broncos, there's some nice synchronicity there. Here's hoping that this is already one of the 1,366 (and counting) unique John Elway cards in the collection of John of Johnny's Trading Spot, 'cuz I dig this one too much to let it go. 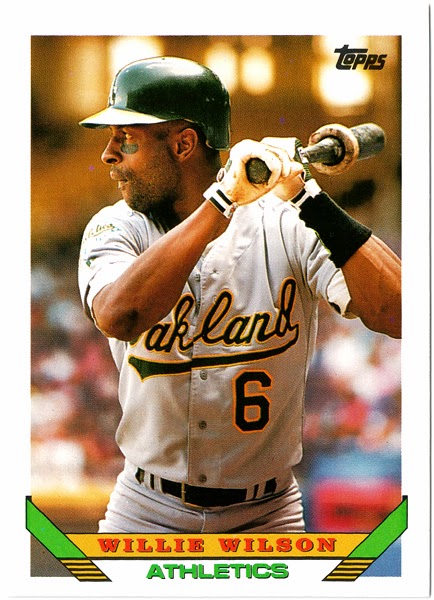 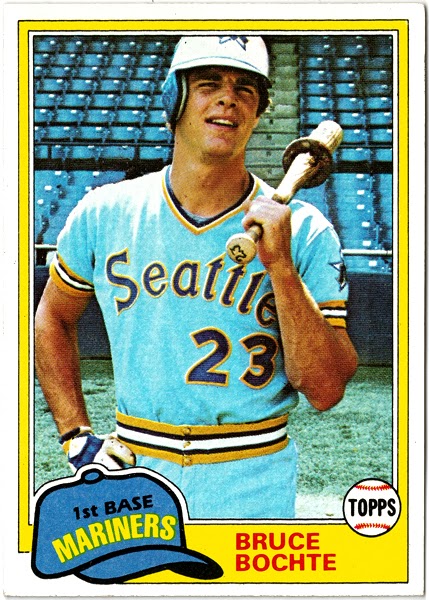 Mmmmmmm... Doughnuts! Nick knows mini-collections. He hooked me up with some nice Doughnuts, but he also knows that Getting a Grip is what really gets the endorphins flowing for me... 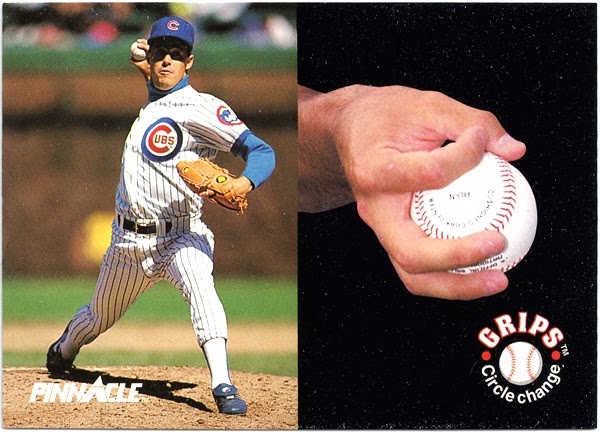 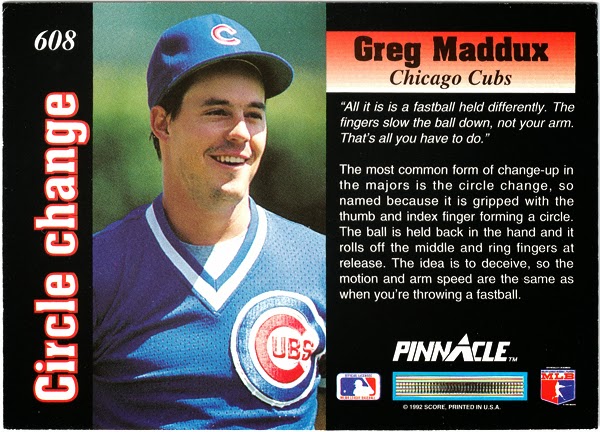 A quick look at the Getting a Grip collection page shows that the only card I still needed from Pinnacle's awesome Grips subset was that of newly-minted Hall-of-Famer Greg Maddux. Thanks to Nick, this beauty is a need no more. I'll be updating the mini-collections pages with Nick's contributions, as well as those from Johnny's Trading Spot, in the next few days. But let's take a look at a few more of Nick's Grips gifts before wrapping this up. 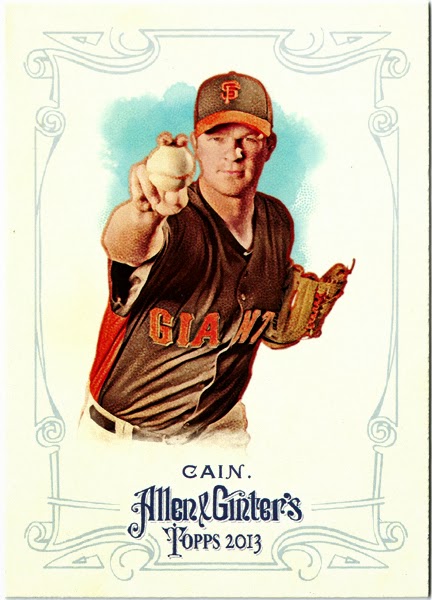 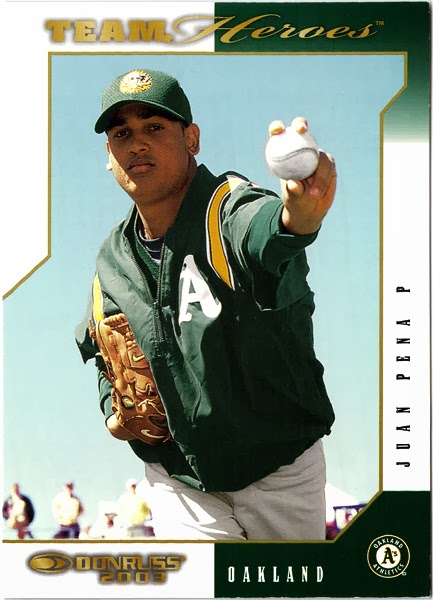 Battle of the Bay Area Grips. Juan Pena pitched for twelve seasons in the minor leagues (including right here in Southern Oregon) and in Mexico, but he never made it to the Big Show. Matt Cain is a three-time All-Star with a perfect game on his resume. The life-long Giant has a 5-10 career record against the Dodgers. Juan Pena wins. (It was never really a contest.) 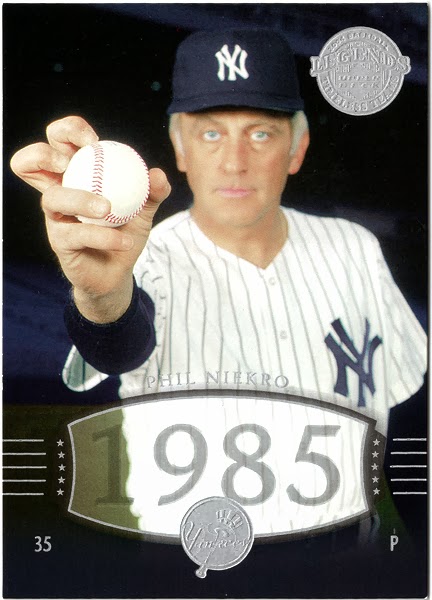 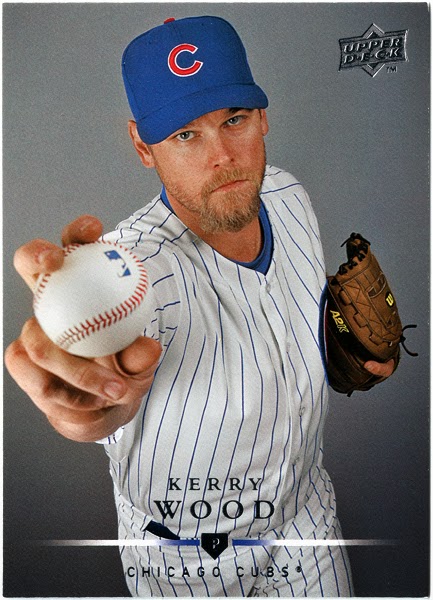 These are the best kind of Grip cards, where the pitcher really gets in your face with that baseball. And there's nothing better than a knuckler gip, especially coming from a 46 year old who won 16 games in pinstripes in '85 on his way to the Hall of Fame. Cubs legend Kerry Wood really goes out of his way to get that grip front and center on this spectacular '08 UD sample. (Interesting that Mark Prior also gets a great Grip card in that set).

But, speaking of going out of their way, Nick also sent me this: 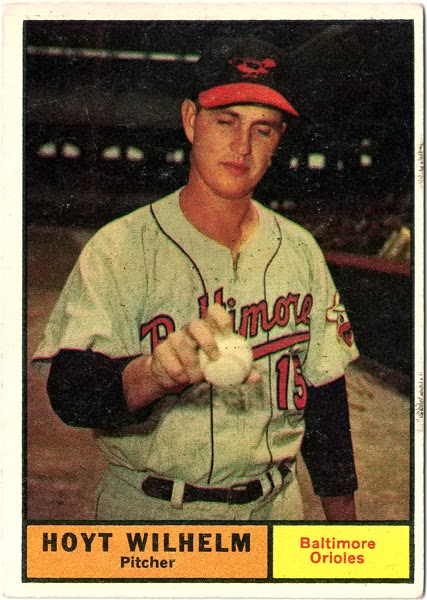 Talk about a grand finale!

As you probably already know, Wilhelm is the subject of Nick's longest-tenured player collection, and this card had been a white whale of his until recently. Thanks to the generosity of the card bloggin' world, he managed to find himself in possession of a second copy of this tough-to-land high-number gem from the '61 Topps set. And in an unbelievable display of his own generosity, he paid that good fortune forward to me. It's a beautiful thing for many reasons:

1) It's obviously a true highlight for the Getting a Grip collection.

2) It's the second vintage Hoyt that Nick has contributed to the Grips collection, the first being the honorary header card.

3) Not that Nick was aware, but I have a decent burgeoning '61 Topps collection. Oddly, I'm pretty sure that I have more '61s than cards from any other year in that decade. Needless to say, this is a fabulous addition.

4) Wilhelm played for the Dodgers. That always gets bonus points.

Not that Nick needs any bonus points. If I'd never received a card from him, his blog would still be a must-read favorite of mine. Having him for a like-minded trade partner has probably been the biggest benefit of joining (in my own half-assed way) the blog community. I look forward to many years of trades and friendship with my brother in Randomocity. Thanks again, Nick.
Posted by petethan at 3:17 PM