Although I'm on a self-imposed blogging hiatus, of sorts, I don't plan to slack when it comes to giving generous bloggers their due for contributing to my portion of our shared habit. Fittingly, December was a nice month for that kind of generosity.

Topher celebrated the fifth birthday of his blog, Crackin' Wax (and Bustin' Packs), by giving away cards. I was one of the lucky PWE winners, receiving some fab Dodgers. 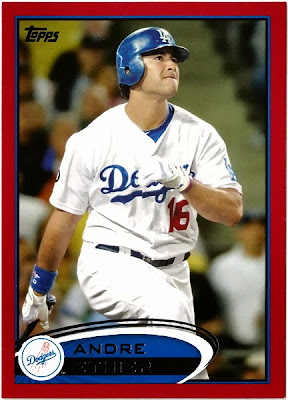 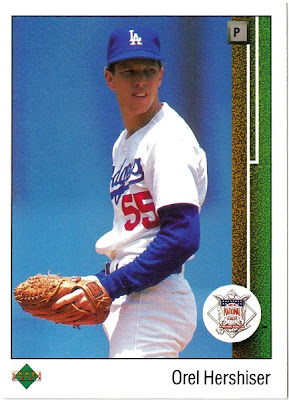 I had originally thought that I was a big fan of Wal-Mart blue-bordered Dodgers cards. Well, I am, but I've come to learn that I actually prefer the red-bordered Target versions better. They still match the team's secondary color, and the contrast of the red sets off the Dodger Blue better than the powder blue on the Wal-Mart versions. So I was pretty happy to see this Ethier pop out o' the envelope from Topher. And I'm always jazzed for a Bulldog sighting. This '89 UD sample could serve as Exhibit A in the farcical event that Orel is ever accused of using PEDs. I also got a couple of other 2012 Topps Dodgers: Nathan Eovaldi and some guy named Clayton Kershaw. But for pure aesthetics, this was the winner of the bunch... 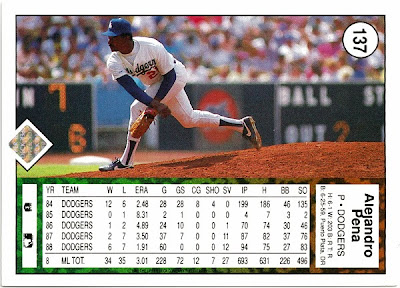 Any card that shows that much of Dodger Stadium rocks. The color of the grass, the red clay of the mound, the '76 logo and the auxiliary scoreboard are incredibly evocative to me of that era (and my teens). Plus, because I didn't appreciate the Upper Deck upstarts at the time (being a crusty old Topps traditionalist by the time I got my first driver's licence), '89 Upper Deck is not among the junk wax sets that I have a gazillion of lying around. If I had to guess, I'd say that I'm only about 75% of the way toward set completion.

Thanks for cards worthy of celebrating your blogging milestone, Topher.

T.J., The Junior Junkie, had another reason to celebrate. November 21 was Griffey's 44th birthday. Which, of course, meant free cards for lucky bloggers like me, who will recognize the sweet floating-head note below. This one was fun because I got to pick the cards from a really nice selection offered up by T.J. I may have been beaten to the punch for the '96 Pinnacle Jeter that would have been my first choice. But even though I picked behind a good bunch of people, I miraculously managed to land my second and third choices! 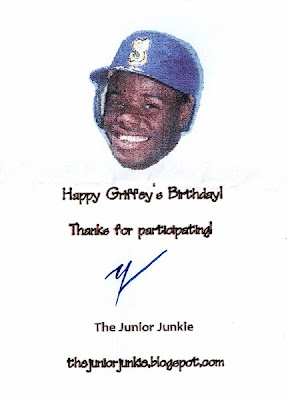 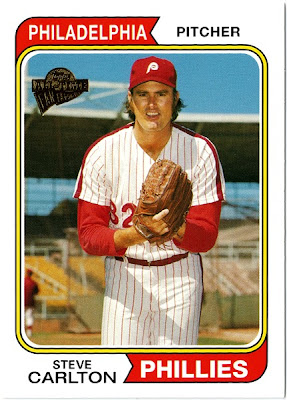 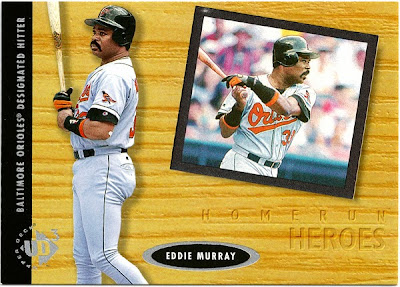 The Murray is particularly sweet because the Orioles uniform is no exercise in post-career nostalgia. Steady Eddie actually played for Baltimore again for the second half of the 1996 season. T.J. even threw in the (apparently unclaimed) '90 Fleer David Justice. Thanks for celebrating The Kid's big day with generosity, T.J.

Speaking of generosity, Chris from View from the Skybox recently sent out a good number of PWEs, with one of the reasons being a desire to solicit more help for the Philippines in dealing with the aftermath of last November's horrific typhoon. To that end, Chris has put together the 2014 Typhoon Haiyan Relief Super Mixer Baseball Group Break. I'm really surprised at how slowly this is filling up. It's a great selection of cards, for a really good price, and for a very worthy cause. And there are some pretty big-name teams still up for grabs. If you haven't already, you really should go check it out!

Even though my wife, Cathy, and I were the first two to sign up back in November, Chris didn't leave me out of the PWE fun. 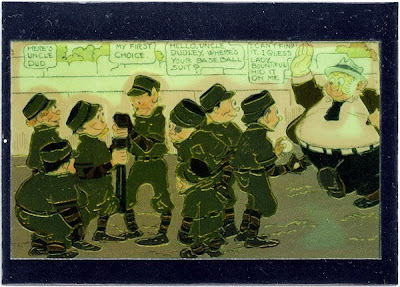 Chris sent me a Jake Beckley card from this set the last time I'd received cards from him, and he knew how much I'd enjoyed its Randomness. So he ratcheted up the Randometer readings even further with this Random-rific sample. 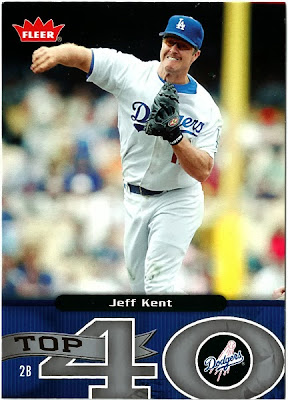 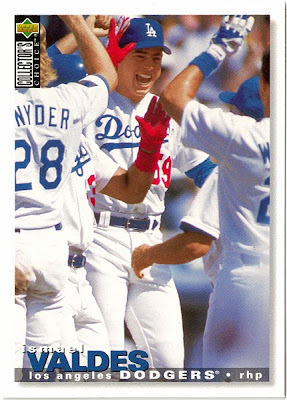 Of course, the bulk of the PWE was a Dodger-fest. It was an interesting reminder that team collecting doesn't always mean collecting cards of people you like. Jeff Kent is a prime example of the kind of person I don't want to have anything to do with in "real life." Ismael Valdez (then known as Valdes) shows up in the Mitchell Report. I can't remember why Raul Mondesi comes up short on the respect-o-meter. I think he was accused of dogging it a bit during his career. And he struck out a lot. He's currently the mayor of his hometown in the Dominican Republic. Not sure if that's a good thing or not. One thing about which I am sure is that I love having these cards, whether I like the dudes all that much or not. 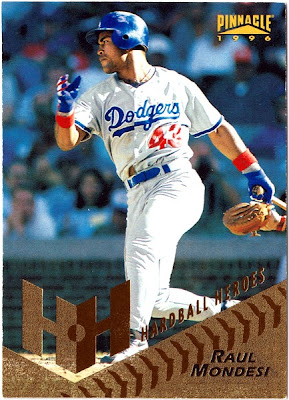 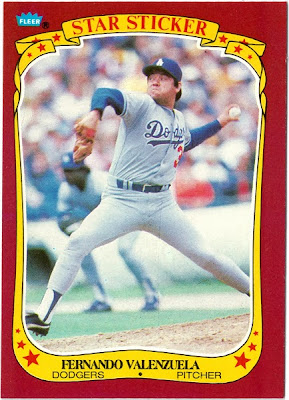 The other thing I'm sure about is that the Fernando sticker is my favorite of the bunch. I can't think of any reason not to be a Fernando fan. I had the good fortune to become afflicted with Fernandomania in my very first full (though strike-shortened) season as a fan, when I was 11 years old. As great as his rookie year was, though, this sticker portrays El Toro at his peak. Lean, experienced, and talented enough to win ballgames even with the likes of Pedro Guerrero back there pretending that he can play third base.

Thanks again, Chris! Can't wait for the big break. Should be a blast.

Other bloggers haven't been the only ones showing me their generosity of late, though. I've also been kind to myself! The way I show my self-generosity is by Feeding the Habit. I have to say that Panini really stepped up and got my attention this year. Prizm is a pretty average offering (though I love those Pulsar parallels). But I really like their Pinnacle and USA Baseball sets, and I love Hometown Heroes and this year's Cooperstown sets. In this lull between Topps offerings, it has been Panini who has delivered my favorite hits lately. 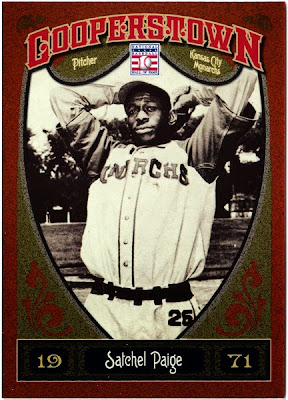 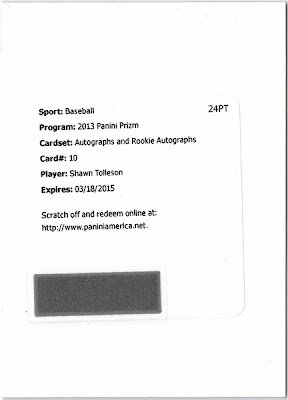 The scan doesn't do it justice, but these orange "Matrix" parallels are sweet. As is any card of Ol' Satch. I particularly like this one because the dark orange of the card matches the color scheme of some of the old KC Monarchs' uniforms. So it's a nice bit of synchronicity.

So is pulling an autograph redemption card for... a Dodger! Okay, so it's only Shawn Tolleson, who's now in the Rangers organization, by the way. But it's a Dodger card. And since Tolleson's tenure with the club was short and uneventful, there's a good chance (if it doesn't somehow look really terrible) that it will end up being the card representing the pitcher in my PWMD set, despite the overindulgent shininess and lack of logo.

Thanks me! More importantly, thanks to Topher, T.J. and Chris for their generosity. And thanks to John, too. Stay tuned for the next exciting post to find out why John deserves thanks (not to mention who John is).
Posted by petethan at 9:27 PM