Random All the Way (Oh What Fun!)

Yesterday we looked at the Dodger-intensive portion of a recent trade package that I received from Marcus of All the Way to the Backstop. But he didn't stop at citizens of Chavez Ravine. Marcus also knows of my love for the Random, and he managed to indulge my cravings for the unpredictable with aplomb.

Marus sent me some fat heads. Not Fatheads. Fat heads... 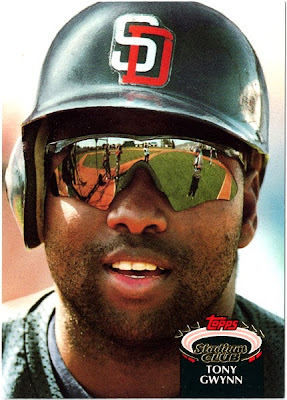 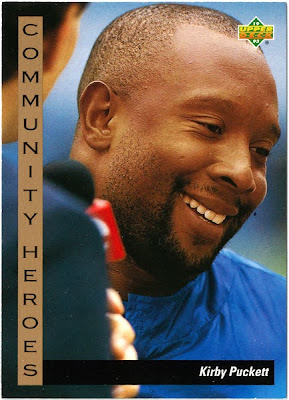 ...of Hall of Fame players and loveable guys on a couple of sweet cards. Cranially concentrated cardboard.

Next, Marus hit me with some aesthetically pleasing Chromified samples from 2012 Topps. 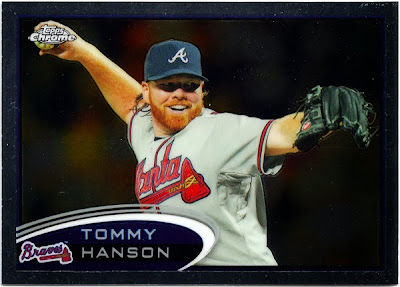 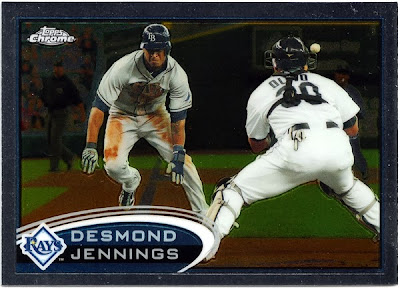 I digs me some pitchers, and Marcus throws two angles of the sidewinder Todd Frohwirth my way. 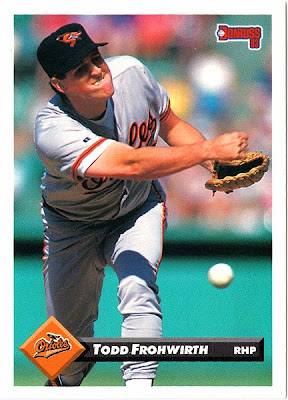 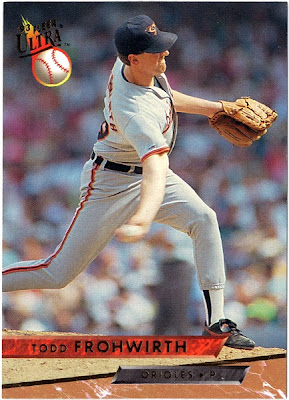 Better than submariners, though, are knuckleballers. And Marus fed me a steady diet of butterfly whisperers, including a handful of Tom Candiotti cards in Dodger Blue, among other greats, including the always-welcome Rough Tough Charlie Hough (a '91 Fleer calling card for Marcus' side-gig, Yellow Cardboard). 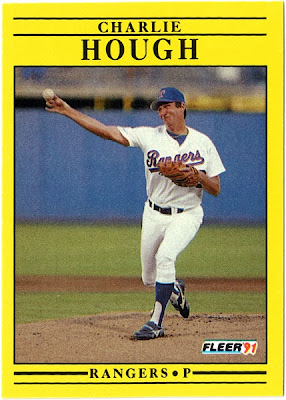 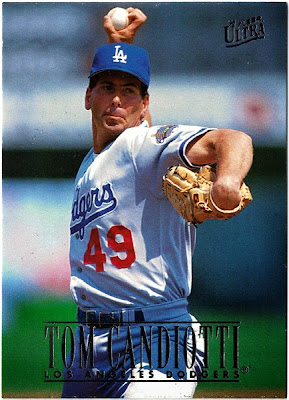 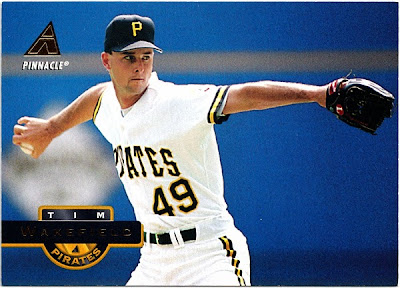 The Wakefield was just one of a handful of '94 Pinnacle gems in the package. 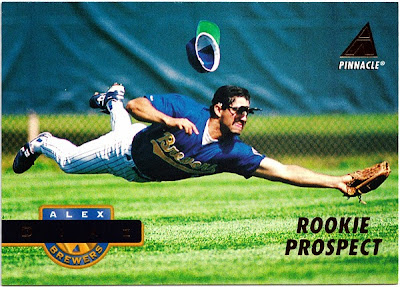 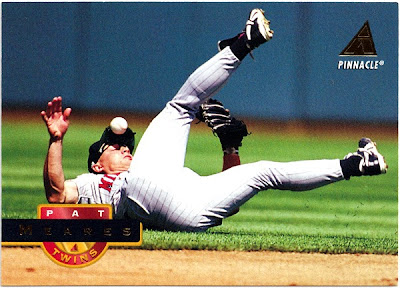 Although I don't see a ball in the glove of Alex Diaz, I'm going to give him the benefit of the doubt and assume he's making a fine play. At the opposite end of that spectrum, we have Pat Meares... 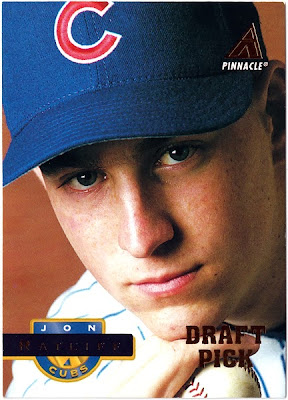 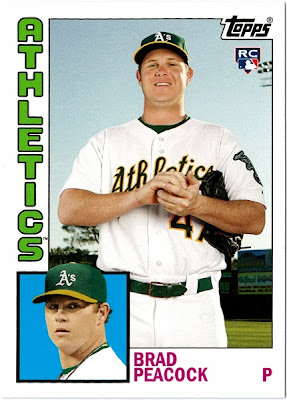 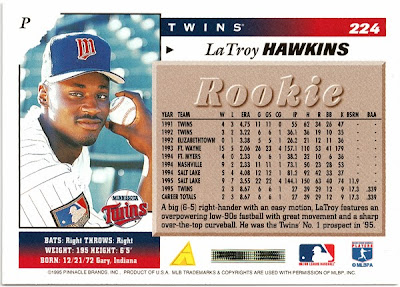 Ratliff displaces Ben Howard as the most extreme closeup in the collection. And you've gotta dig LaTroy Hawkins... 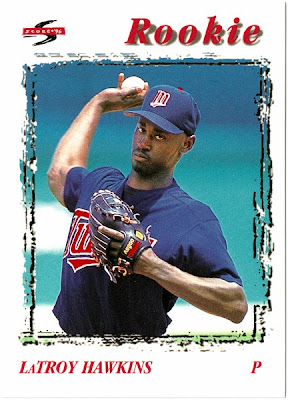 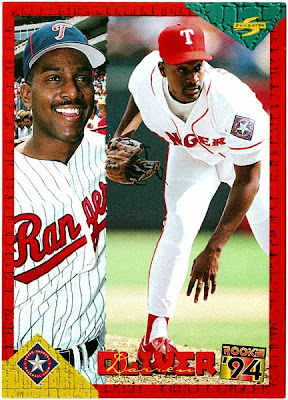 ...as well as Darren Oliver, junk wax rookie pitchers who were both active in 2013! Hawkins is particularly amazing, being a right-hander (lefties are more adept at reaching baseball senior citizenship). Not only that, but LaTroy became the Mets closer last year, and signed to play in his 20th big-league season with Colorado in 2014.

I'm actually a huge fan of this '94 Score Rookie/Traded set. It's one of those card designs that I think I should hate, but actually love. And Marcus sure didn't skimp on quality with these things... 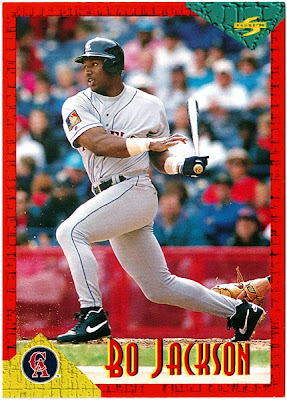 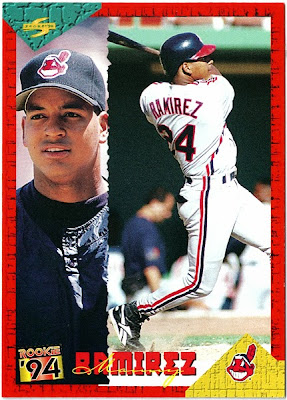 Bo knows the MLB 125th Anniversary patch and a pretty sweet Angels logo from before they went Disney. Although he's not doing anything odd, one has to assume Manny is still being Manny.

These two posts show just the tip of the snowcone. Marcus sent a package chock-full o' Random nuggets. And he ties a bow on the Random by coming full circle with the invocation of a sense of place. I started out in the last post by showing you the beautiful Dodger Stadium card that he sent me. That represented my childhood in sunny Southern California. I'll close with a card representing my time as a young adult in New York. 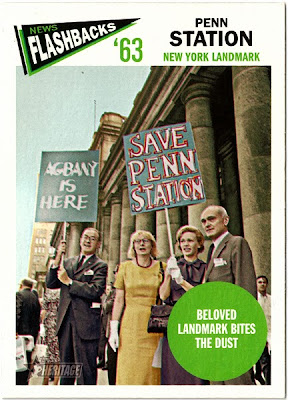 Marcus tells me that he was actually born in Oregon, the place where I now find myself raising kids and enjoying my midlife crisis. It's a small, Random, cardboard-filled world. Thanks for bringing a little more of what it has to offer my way, Marcus. And if I have the pleasure of another trade opportunity with you, I promise to do you the courtesy of sending your cards to your address. Gotta prove this rookie can make adjustments...
Posted by petethan at 11:59 AM