Radical Rewards for a Raw Rookie

My rookie year as a baseball card blogger has been... inconsistent, to say the least. I'll blather about myself and my "season" as the year nears completion. (Or maybe I won't. Inconsistent, remember?) Right now I want to face the music and come clean publicly about my biggest rookie gaff to date. 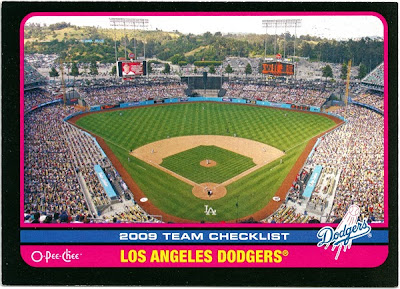 The great cards that I'm going to be showing in this post (and in another to follow) come from Marcus, Padres fan and the proprietor of two fantastic blogs: All the Way to the Backstop, and Yellow Cardboard, which glories in Fleer's 1991 canary-colored effort. He sent these my way a little over a month ago, at about the same time that I received the package from Michael, of Nomo's Sushi Platter, which I showed off last week.

Being the raw rookie that I am, it took me about three weeks to sift through my woefully unsorted collection to find enough remotely useful cards to send to each of them. But I finally managed to accomplish that feat, and get to the post office to complete the task. I had flat-rate envelopes addressed and ready to go, but the postal worker informed me that it would be less expensive to simply address the bubble mailers and send them that way. So she took the packages for just a moment to put on the postage and handed them back to me to address. Naturally, I kept a close eye on the packages so I wouldn't mix them up.

A couple of days later, I got an email from Michael informing me that he'd received the cards... the cards for Marcus. So I had to let Marcus know that he was getting the wrong cards as well, and ask each to forward the packages to their proper destinations, something that was beyond this rookie blogger's meager capabilities. Both of them were incredibly understanding and helped me to feel a little less useless. Hopefully, they'll both enjoy the cards that I sent, when they finally arrive at the proper location.

One thing I know for sure: I certainly dug what came my way... 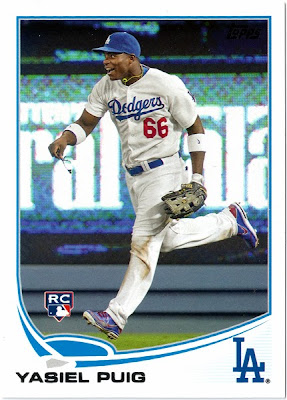 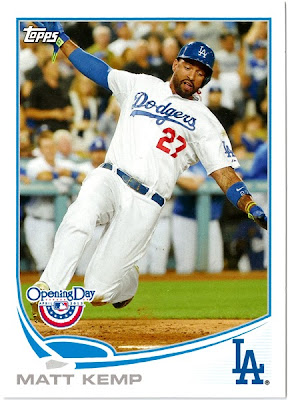 This is the first Puig that anyone has ever sent my way. Back in June, it would have been impossible to imagine a person doing such a thing. It seemed like every other listing on ebay was for an exorbitantly-priced piece of Puig cardboard. People were seeking them out like water in a desert and hoarding them like gold... in... a silver mine... or something? A few months later, here's a Puig sitting nonchalantly in the middle of a trade package from Marcus, like... bread in a bakery...

(Now I'm just using my rookie status as an excuse for incoherent writing.)

Marcus didn't stop there with this year's greatest hits. 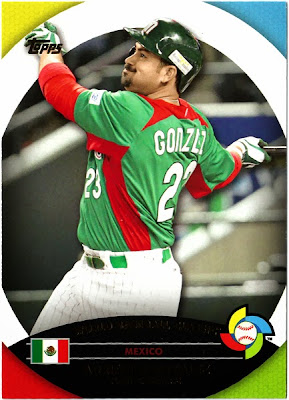 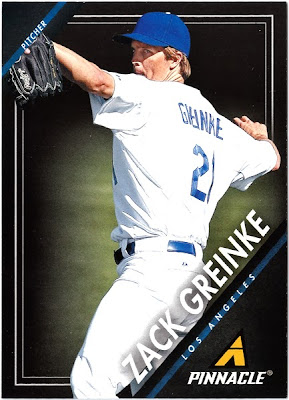 A-Gon, a Dodger on a WBC card. A double Playing With My Cards whammy. Then there's this great piece of Zack on black from Panini's resurrection of the Pinnacle brand. 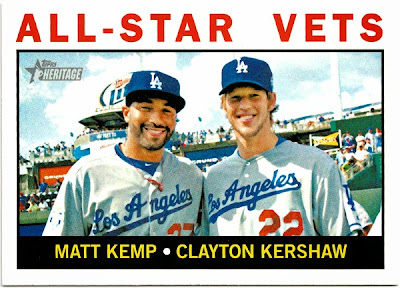 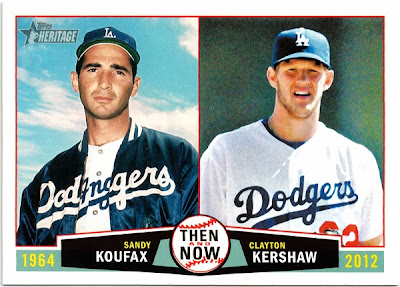 It didn't stop there. Almost as surprising as receiving a Puig was receiving multiple Kershaws, including one with Koufax. Being Dodger collector #764 in the blog world, I understandably don't usually get the kream of the krop, so it was nice to feel just a hint of Night Owlism for a moment. 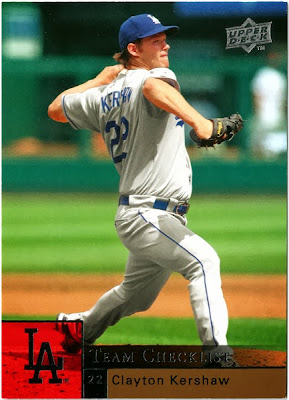 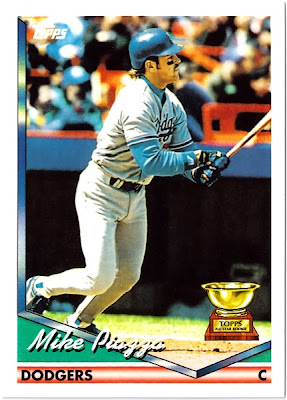 Clayton is about to get a well-deserved multi-gazillion-dollar-lifetime-and-a-half contract, and then lead the the Dodgers to back-to-back-to-back-to-back-etc. championships. (Or something approaching such Bluegasmic heights.) Mike Piazza wasn't given that chance. Sweet insert. You can't go wrong sending inserts to this budget-minded collector. 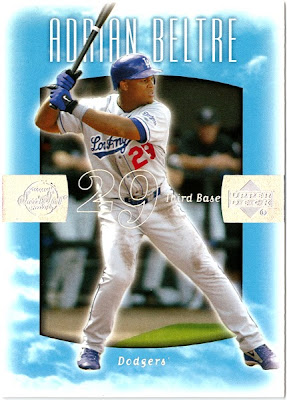 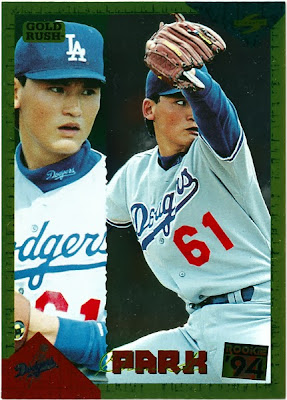 I love both of these cards. You see grass green being used as a design element sometimes, but blue sky is pretty rare. I think it works great here. In fact, I may be showing this prematurely. I'm not sure that it hasn't replaced my intended Beltre card for the PWMD set. Dig the Chan Ho, too. It looks like a weird green in the scan, but it's shiny gold, like those Topps all-star stickers from the early '80s. It may not be as high tech as an atomic megasuperfractor, but it's pretty sweet, nonetheless. 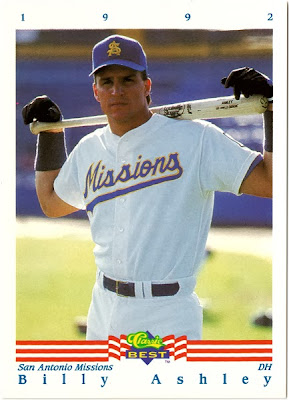 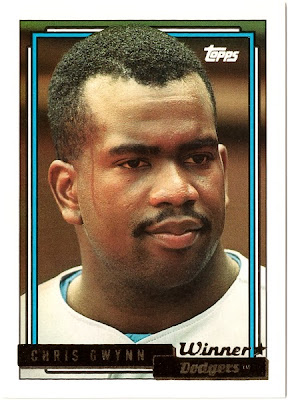 Billy Ashley makes for a really interesting player collection. You'll find that about 90% of his cards are of the minor league or "future star" variety. Not only did stardom prove elusive, but so did competence. In retrospect, being a designated hitter at the AA level probably should have been a warning sign. Meanwhile, it's good to see that Chris Gwynn's sweat-producing effort paid off with a victory and a gold star.

Marcus didn't limit his benevolence to Dodger goodies, but I'll save the more Random half of the package for the next post. I'll wrap up part one with these beauties... 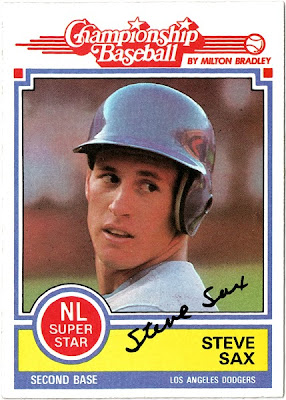 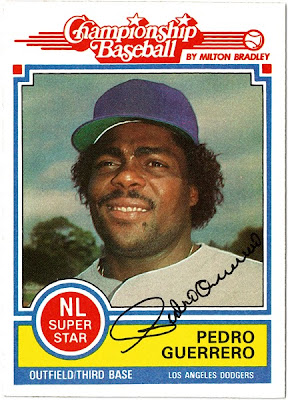 ...which lead me to yet another confession. (Jeeze, having a blog is like ongoing psychotherapy.) I already had these. Three of them, in fact, along with all of the other cards in the set. That's because... shame... I busted into the Championship Baseball games on the shelf of my local Kay-Bee toy store when I was a kid to extricate the cards. The temptation was simply too much to handle. It's not the kind of thing that I did much of as a kid. Not my finest moment. I am suitably ashamed. (But I'm still glad to have the cards...)

If I'd known more generous-hearted people like Marcus to look up to as a role model when I was a kid, perhaps I would have avoided this criminal moment (along with my Sutton-snatching incident of 1980). But better late than never. Thanks again, Marcus.
Posted by petethan at 12:13 PM