Playing With My Dodgers: Ramon Martinez

It would be an understatement to say that I was spoiled by my first decade as a baseball fan and a Dodger fan. In the 1980s (ages 10-19 for yours truly) the Dodgers never went more than two years without making the playoffs, and they won two world championships. As the calendar turned to the 90s, I had no idea how lucky I'd been, or just how long I would have to wait for another championship (until 2014, it turns out).

At the dawn of my second decade as a Dodger "tenth man," I had every reason to believe that success was a given for my team. Pitching had been the cornerstone of that success, behind veterans like Jerry Reuss and Burt Hooton, a young Bob Welch, and the arrival of Fernando Valenzuela followed by Orel Hershiser. By 1990, the vets had retired, Welch had moved on to the run-support utopia of Oakland, and Tommy Lasorda had managed to keep running Fernando and the Bulldog out there until their arms had all but fallen off. But the Dodger farm system kept churning out aces, and lanky Dominican righthander Ramon Martinez was next in line.

Ramon lived up to the billing early, finishing second in the NL Cy Young voting at the age of 22 in 1990, going 20-6 in his first full season in the Dodger rotation. In June he became the only Dodger not named Koufax to strike out 18 batters in a game, and he would pitch a scoreless inning in his only All-Star Game appearance. But all of the early innings would predictably take their toll on his arm, and despite several more solid seasons, he would never again achieve the heights of 1990.

Today, of course, Ramon is probably best known as the brother of the great Pedro Martinez. But for a few years, Dodger fans knew Pedro as the great ace Ramon's little brother. Los hermanos would reunite for a couple of seasons in Boston. After an unsuccessful attempt to keep his career going in Pittsburgh, Ramon would retire in 2001 at the age of just 33, with a lifetime 135-88 record and over 1,400 strikeouts. 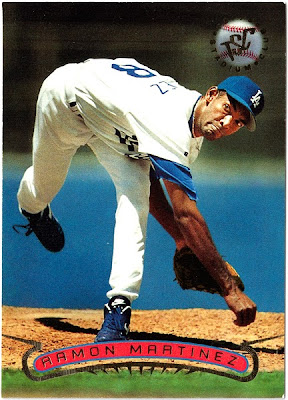 This card shows Ramon in all of his lanky glory, coming right at the batter. The card's design gives the illusion that Martinez just let loose with the Stadium Club logo. A great addition to the PWMD set. This is one of the many gems sent to me in a recent trade package from Michael of Nomo's Sushi Platter. I'm happy to say that I just managed to finally get a package in the mail to him. Thanks again, Michael. Hope I managed to send you at least half of the fun you sent my way.
Posted by petethan at 3:42 PM