Yesterday we began to look at some of the highlights from a trade package that I recently received from Michael of Nomo's Sushi Platter. Today we move from mini-collection gems to Dodgers, Dodgers, and more Dodgers. 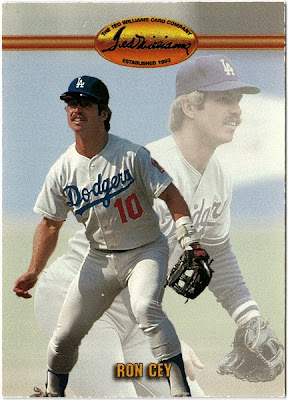 Michael sent cards from three card-collecting eras. The Penguin was the anomaly as a player, coming from my childhood collecting era. But the card itself comes from the "junk wax" or "overproduction" era, which represented one grouping of cards in the package. The amazing thing about it, though, is that I needed something like 90% of the cards that he sent from this era, which would be hard to accomplish even had he some idea of what I already had. 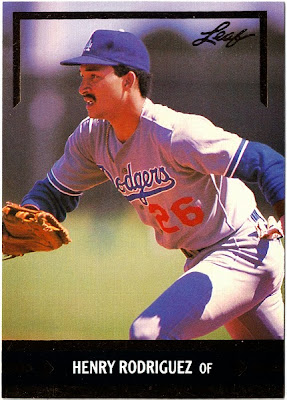 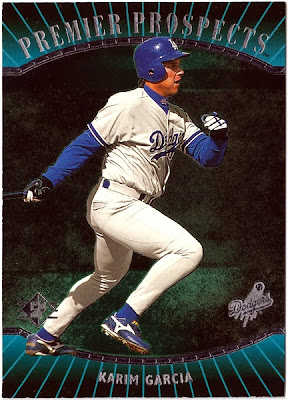 Here are a couple of powerful outfielders who made their name away from Chavez Ravine. Henry Rodriguez was briefly the biggest bopper in Montreal, before the emergence of Vladimir Guerrero. Unlike Reggie Jackson, he didn't have a candy bar named after him. But fans adopted the Oh Henry! bar as a tribute to Rodriguez, throwing them on the field when he would homer. Rodriguez was also the Cubs' primary cleanup hitter in 1998, providing the protection for Sammy Sosa's drugs to work their "magic" on the record books. Garcia's career turned out to be less impressive. I remember him best for jumping into the Red Sox bullpen at Fenway to fight with a groundskeeper during the 2003 ALCS. 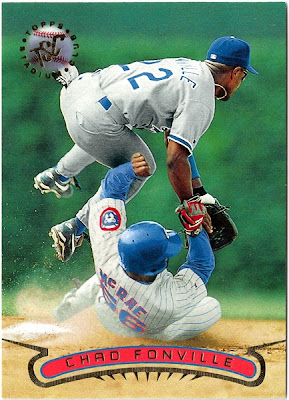 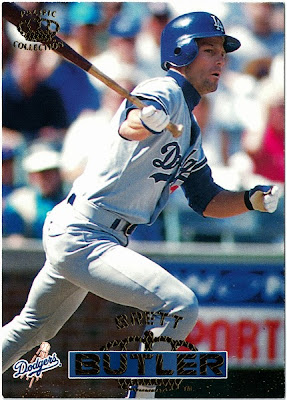 I couldn't tell you exactly why, but I always kinda liked Chad Fonville. He was a speedy little utility infielder type. I love this card for a number of other reasons. The elemental background, featuring the infield dirt and the green ivy of Wrigley Field, is fantastic. Also, with Hal McRae's son Brian barreling down on Fonville as he tries to turn two, it kinda reminds me of that oft-played video of Hal McRae trying to kill a young Willie Randolph of the Yankees with a take-out slide. Brett Butler, of course, was a class act (despite his time with the Giants) and one of the top players for the Dodgers in the 1990s, a decade in which they did no better than a couple of division series appearances in which they were swept. Also, I have very few Pacific cards from any year, so these are always welcome. 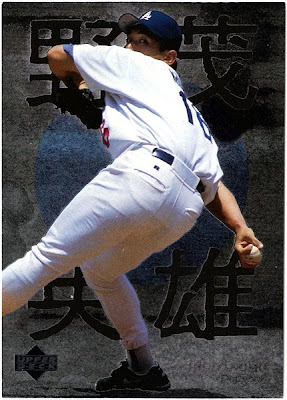 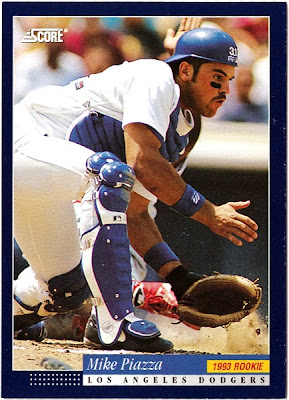 Now we step into superstar territory. Nomomania was the highlight of 90s Dodger baseball for me. I've been eying this particular five-card insert set for a long time, so I'm very thankful to Michael for starting me down the path toward adding them to my collection. And then there's Piazza. Only the fact that I lived in New York for the majority of his time with the Mets helps to mitigate against the pain of the Dodgers letting him go. I usually can't stand catchers who are all-offense with little defense. So Piazza had to be a pretty special player for me to be the fan of his that I became. 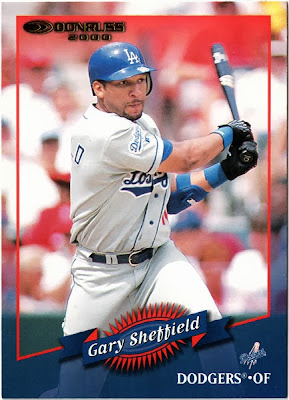 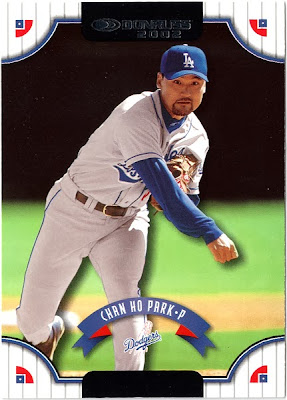 Now we move into the next collecting era, a black hole for me (and many other collectors) that extends from about 1997-2007. During this period, I kept buying the Topps base sets (some retroactively), but that's about it. My collection is only now coming to include some of the many things that I missed at the time. Among these, turn-of-the-century Donruss issues have become a surprise favorite of mine. Except for a few odd sets, here and there, I was never much of a Donruss fan during my first collecting period. But these things are pretty sweet, particularly the backs (which I didn't scan for some reason). Nothing was worse than Donruss card backs in the 1980s. It's been many years since I've felt compelled to turn one of those things over. These, on the other hand, are the equal to anything Upper Deck has put out. I'm really looking forward to slowly accumulating cards from these sets, and these Dodgers from Michael are highly appreciated. 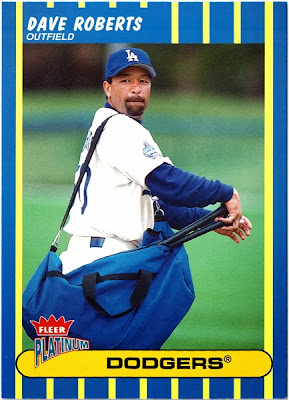 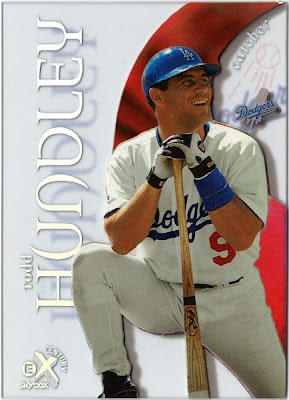 Despite what "Red Sox Nation" may think, Dave Roberts' entire career didn't consist of a single pinch-running appearance. Though I was actually surprised when I took a look at his career stats to find that he was only a Dodger for two and a half years. I had also forgotten that the Dodgers not only acquired Todd Hundley, but brought him back after he'd left to play for the Cubs. Not the brightest moment for the LA front office. Then again, the franchise wasn't exactly firing on all cylinders at this time. Sweet card, though. A first for me. I dig the way the name plate casts a shadow through the translucent plastic on the scan. 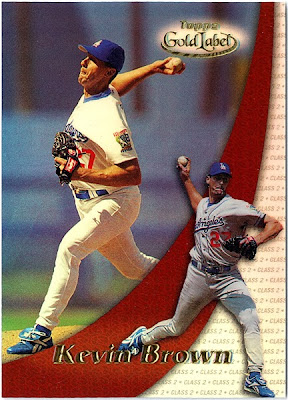 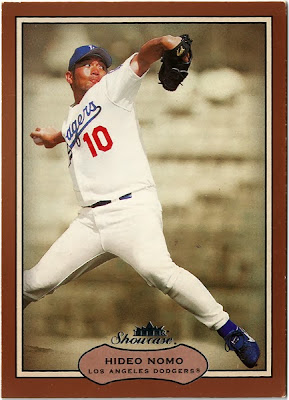 The surly Mr. Brown here is my first sample of Topps Gold Label. Nice cards. The turn of the century seems to have been awash in high-end multiple parallel sets. When I start to think that Topps has gotten a little too cute about that these days, I can remember that it's apparently nothing new. Although I dropped out a bit before this time, I hear that the never-ending chase aspect of collecting in this period drove some people away. Unlike with Hundley, the return of Hideo Nomo after a few vagabond years was more than welcome. 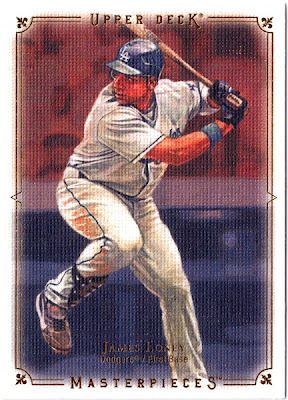 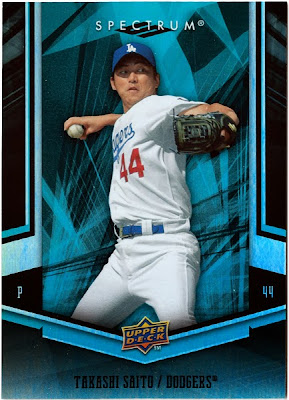 Now we arrive at the third and final collecting era that Michael treated me to: the "Resurgence Era," as I just now decided to call it. By this I mean from about the time I began to be exited about cards again up to the present. It's a little weird to think of James Loney and Takashi Saito as representative of my team's past. Time moves by way too quickly, and there's nothing like baseball to remind you of that fact. I was happy for Loney's success in Tampa Bay. I always really liked him, and considered him every bit the equal of Ethier and Kemp as the Dodgers began to return to their winning ways. 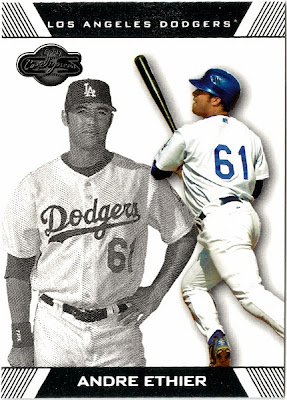 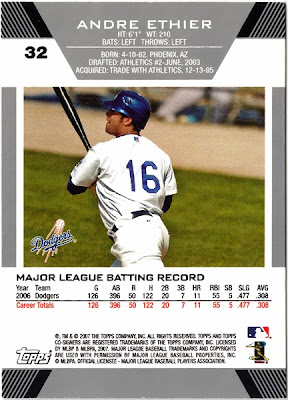 Speaking of Ethier, I'll end this post with one of the more puzzling cards I've seen. I can understand a negative getting reversed, or Topps simply getting a Photoshopped uniform number wrong. But what the heck is going on here!? Maybe Ethier wore 61 in spring training? But there he is on the back of the card, in the same picture, wearing his familiar #16. Don't get it. Just plain weird. Any ideas, anyone?

I only showed a few cards here from the "Resurgence Era" because I want to save the rest for my final post about Michael's generous trade package. There's an excellent chance that I saved the best for last, though frankly it's all the best to me. Thanks again, Michael!
Posted by petethan at 6:27 PM