As I explained when I launched this site in early July, the blog's name is an homage to my Grandmother, who raised me, and who used to exasperate me as a kid by insisting on calling my serious collecting activities, "playing with my cards." My Grandmother is now 87 years old. After a couple of falls and hip surgery, she's been in a care home for about two years now. I visit her every morning before work, every night after work, and for what we call "play days" on my days off. We play cards and go for walks (me pushing her in her wheelchair) when the weather is good. She insists on buying me baseball cards when we find ourselves at Rite Aid or the dollar store. I sort baseball cards while she plays bingo. Simply put, she's awesome and I love her very much.

Given her age, I feel very grateful for the amount of time that I've been able to enjoy her presence in my life. Last week (on what proved to be the final day of baseball for the 2013 season, in fact) it looked like my time with her was about to come to an end. At least that's what the doctors kept telling me. She had a heart attack about ten years ago, and her heart function has been in steady decline since. Last week she developed pneumonia and went into the hospital, where the doctors told me to prepare for the worst.

Knowing her the way I do, I probably should have known that the doctors had no idea what they were talking about. There's never been any slowing her down. Less than a week after I thought I was watching her final fitful breaths in the ER, she's already back at her care home, refusing to be put into bed to rest because she doesn't want to miss bingo, or flower arranging, or getting her nails done.

Things looked pretty dire over the weekend, though. My stress levels were high. I wasn't sure it was possible, but I'd hoped to find a temporary diversion to take my mind off of things. You can guess where I turned. But I'm not sure I would have been able to really enjoy the diversion were it not for a package I'd received from Michael of Nomo's Sushi Platter. He'd sent me an email a couple of weeks back, asking if I'd be interested in a trade. Naturally, I was all for it, but with everything going on it had slipped to the back of my mind. By the time I'd gone through everything that Michael had sent, said mind was officially blown. He went the extra mile. 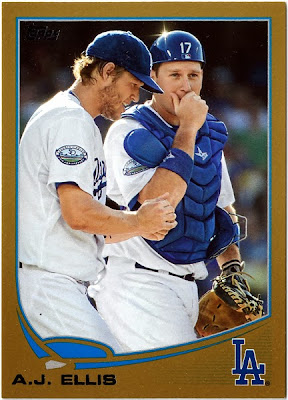 This might be my favorite of the cards that he sent. But it might not. There were so many fabulous finds. I'm going to divide my presentation of this package into three posts. This first shows some of the great mini-collection cards that Michael managed to hit me with.

I have the base version of this card, but the gold is sweet. And I didn't really appreciate how great the card was until I received this one from Michael. Part of the reason is that I've always considered this kind of star cameo to be a bit tacky. But this one is different (at least to me). It features my two favorite active players. And, rather than taking the spotlight off of Ellis, I think it highlights his importance to Kershaw's and to his team's success. On top of that, I hadn't really realized until I received this card that it's an excellent "Rubbing Up the Ball" variation of a Getting a Grip card. 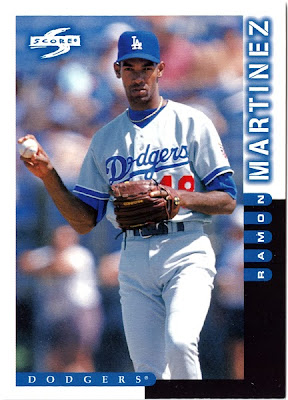 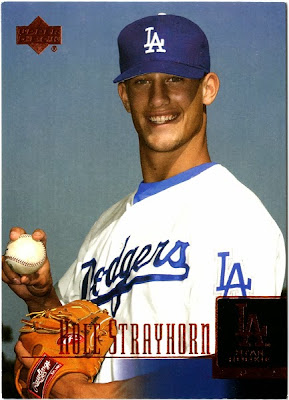 Speaking of Getting a Grip, here we have Pedro's older brother, the Dodger ace between Hershiser and Nomo. Then we get a kid who never quite made it to The Show. I really dig 'em both. There were lots of Dodgers in the package, mini-collection hits and otherwise. We'll see a large selection of them in Part II. Michael even sent two cards that will be inducted into the most important collection I have: Playing With My Dodgers. So look forward to those in the near future, as well. 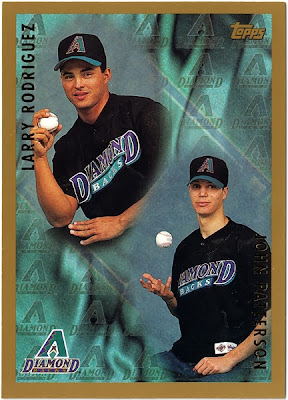 I love this card because it's a combo that includes both Getting a Grip and an example of what is likely to be the next mini-collection that I commit to: "Balls in the Air."

In all, Michael managed to expand the Getting a Grip collection by a whopping eight cards. He may have thought that number would be eleven. And he may not have. Whether or not he had intended to challenge the parameters of the collection, he did. And that's just plain fun. Two cards featured players gripping a ball, but didn't qualify for the collection because they featured position players, not pitchers. Then there's this one: 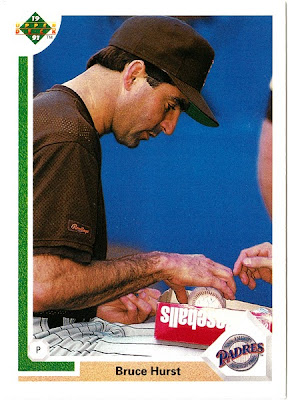 To qualify for the collection, the pitcher must be holding the ball in a pitching grip, not simply holding a ball. Not a Grip, but Michael paid attention to my affinity for veteran pitchers, so I dig it just the same. 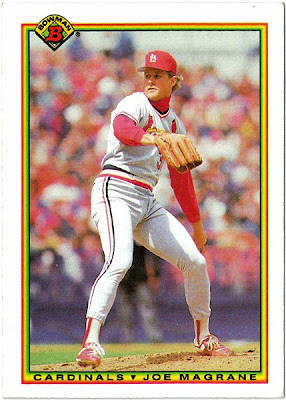 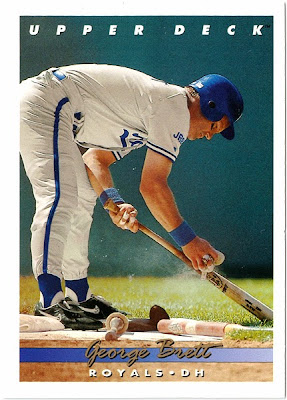 He didn't ignore the other mini-collections, either, contributing three Turtlenecks and four Doughnuts. These cards do double duty in the realm of catering to my tastes. Magrane is another thinking man's pitcher. And Michael probably paid attention to the fact that I was there for Brett's 3000th hit.

Believe me, this is just the tip of the iceberg. Michael put a great deal of thought into the cards that he sent me. So much so, that I'm going to have a nearly impossible time coming up with an appropriate package to send to him in return. But I'm sure gonna enjoy trying.
Posted by petethan at 6:28 PM