Playing With My Dodgers: Henry Schmidt & Darren Dreifort (or, "I'm No Sandy Koufax")

There have been five pitchers to win 20 or more ballgames in their final big-league season. The most recent was Mike Mussina of the Yankees, who posted his first and only 20-win campaign in 2008. Two of these pitchers (Eddie Cicotte and Lefty Williams) had their careers ended prematurely by their participation in the Black Sox scandal of 1919. And Sandy Koufax was forced by injury to retire after what may have been the best season of his legendary career.

The final man on this list is unique in that his 20-win season was not only his last, but his first and only season in the major leagues. Henry Schmidt went 35-20 in the independent California League in 1902 for the Oakland Clamdiggers (or Oakland Dudes, depending upon your source), prompting the Brooklyn Superbas to sign him for the 1903 season. The 30-year-old righty would lead Brooklyn's staff in victories, going 22-13, despite posting the highest ERA (3.83) of any member of the club's rotation. The Superbas wanted Schmidt back for the 1904 season, but the reluctant hurler returned his contract unsigned with a note that read, "I do not like living in the East and will not report," bringing his one-year big-league career to a close. Schmidt may have had a card or two made of him during his career on the west coast. But maybe not. I haven't seen any evidence that such a thing exists. And even if there is something out there, I'm unlikely to ever come into possession of it. So, blurry photo and all, this Target card of the only man to have a single-season, twenty-win big-league career is a beautiful thing.

I've been doing this card blogging thing for about a year now. I started (the currently hibernating) Top of the Topps on April 16 of last year. It's an anniversary that I'd intended to acknowledge at the time, maybe even by reawakening that blog for the spring. But that didn't happen.

I had a very productive month o' March as a blogger. April? Not so much. If I were a big-league pitcher, my blogging skills would translate into the kind of player that I don't much care for. I'm streaky. Inconsistent. And I was in a big-time slump last month. Not the kind where you're just missing the corners and every little blooper is finding a hole. No, this was the kind of slump where you routinely get knocked out of the box before you even get used to the mound. Translating that back into blogging, I not only had writer's block, but scanner's block, cropper's block, and just about any other kind of block that you can think of. When that happens, I start to compare myself to the steady veterans out there who post just about daily, month after month, year after year. I start to feel like maybe I don't belong in the big leagues. The slump snowballs, and it becomes harder and harder to get back on track.

So, does that mean I'm going to be like Henry Schmidt? Am I going to have one pretty good year of blogging, and then disappear?

Eric Gagne (chemically-enhanced), Sandy Koufax, Clayton Kershaw, Hideo Nomo, Chan Ho Park... Darren Dreifort. Sixth in Dodgers' franchise history with 8.27 strikeouts per nine innings is Darren Dreifort. This fact does more to point out what might have been than what the highly-touted righty actually accomplished in his twelve seasons as a Dodger. Only four pitchers have spent more seasons with the franchise (Don Sutton, Don Drysdale, Orel Hershiser and Johnny Podres). But thanks to twenty surgeries in his big-league career, causing him to completely sit out three of those twelve years, among many other stretches on the disabled list, Dreifort's long career really never got on track.

This was made all the worse by the fact that his agent, Scott Boros, would work his "magic" by getting the Dodgers to agree to a five-year, $55 million contract when Dreifort became a free agent after the 2000 season. Dreifort was coming off his finest big-league season, in which he went 12-9 with a 4.16 ERA. His career record at that point was 39-45. He would never again win more than four games in a season. He was unable to pitch in the final year of the contract (and his career), despite being the seventh-highest paid player in the National League in 2005. 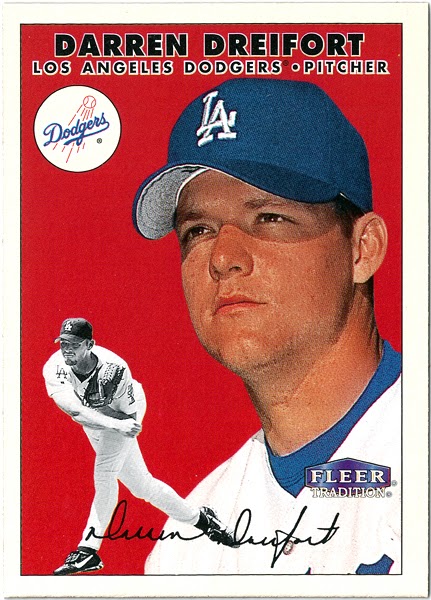 I got this great card from Jeff over at 2x3 Heroes as part of his awesome 'Tis the Season package that he sent my way. It's a gift that keeps on giving! It's tough not to like these great '50s Topps knockoffs. And I'm a big fan of red borders and backgrounds for Dodgers cards. Good stuff. Thanks again, Jeff.

So, am I more like Darren Dreifort? Will I stick with this blogging thing, occasionally flashing signs of potential, but struggling through slumps and periods of inactivity? Or might I find it in me to step up my game, stick this thing out, gain some consistency and maybe find a way to shine on occasion? I'm no Sandy Koufax. But, hopefully, I'm also no Henry Schmidt or Darren Dreifort, either. Can I be Don Sutton? Maybe not. Fernando Valenzuela? That would work. Nap Rucker? Possibly. Van Mungo? We'll see. Only time will tell.

I have some catching up to do around here, especially in the trade post department. As the Night Owl recently pointed out, trade posts aren't exactly the marquee matchups of the card blogging world. So I'm going to continue to explore this theme of what kind of blogger and collector I may be, and want to be, while I bring things up to date and give some much-deserved thanks to a long list of generous bloggers (and a couple of non-bloggers, as well).

In the meantime, I hope you'll hang in there with me while I continue to figure out my place in this world. My "career" is in the balance, and as Random as things can be around here, anything can happen.