Thanks in Part to Zach, I'm Back on Track (or, "Remembering Remember the Astrodome: Thanks for the Trade, Marc")

Yesterday I wrote about the recent blogging slump that I'd been suffering through. It won't be the last. It's just who I am. No matter how into something I may be, I just seem to require a break every so often. It isn't that I've lost interest during these periods. I want to want to keep on posting. But sometimes I just can't make it happen.

When I'm in a slump like that, I need something to come along and snap me out of it. Well, the fact that I started this post by referencing what I posted yesterday indicates that there's a very good chance this most recent dry spell has come to an end. So what snapped me out of it? A couple of things. The final straw came over the weekend. I'll save that story for the end of this "series." (I'll give you a hint: Vintage Virtuoso.) But the spark that began the awakening arrived in my inbox last week.

Out of the blue I got an email from a guy named Zach. I'd never had any prior interaction with Zach. Just a one-way correspondence that I had long forgotten about. Sometime last summer, before I'd even started this blog, I asked Nick of Dime Boxes if he needed a 1993 Upper Deck Mike Scioscia. The card shows Scioscia with the Padres, for whom he would never play a regular season game before retiring. That made it a "zero-year" card and a "sunset" card, both things Nick really enjoys. But he already had the card, so he suggested that I send it to another blogger that he knew to be good peops. I did so, and then I eventually forgot all about it.

But I hadn't forgotten about a quick and easy little PWE trade with Marc of Remember the Astrodome. I just hadn't posted about it yet because of that nasty little bloggin' slump.

I like these kinds of trades, for reasons that I'll go into more detail about later in this "series." (It's a conceptually loose "series," with connections that will probably fail to make it out of my brain as something recognizable in the real world. But I'll keep calling it that, if for no other reason than to motivate me to post consistently.) Anyway, I recently hooked Marc up with the Astros team set from my (Not) Junk Wax box busting of 1994 Score Rookie/Traded. In return I got a couple of pieces for some set-building needs, plus this sweet Reggie insert: 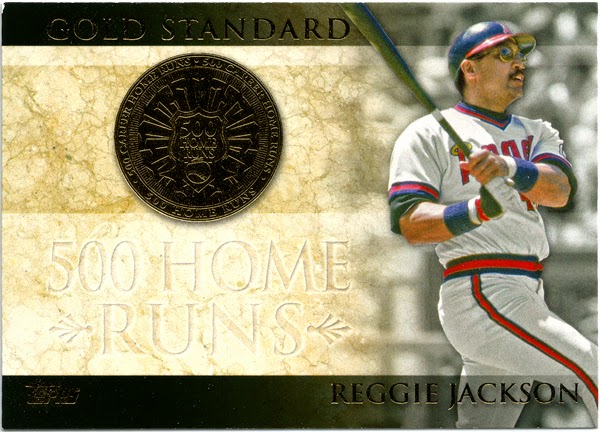 I wasn't a huge fan of the 2012 Topps base set design, so I bought the factory set instead of busting packs that year. I regret that decision, in retrospect (as I always have when I've gone that route). Of course, one of the biggest bummers of foregoing pack busting is the consequent lack of inserts. I never buy enough packs to come close to completing master sets, but at least I usually get a fair representation of what's on offer. Not so in 2012, so I'm always happy to get these where I can. Plus I've always enjoyed Reggie's stint with the Angels, as part of their Super Veteran lineup of the early '80s.

Back to Zach. I was mired in writer's (and scanner's, and cropper's) block when I received his email. Zach runs The Underdog Card Collector, but just around the time I'd sent him that PWE last year his account was hacked and he went out of business for a while. Well, he made a comeback last month, and to my amazement he not only remembered that I'd sent him a couple of Random cards, but he acknowledged it with a post on his relaunched blog. I'd sent him those cards so long ago that he refers to me as the writer of the Top of the Topps blog! If that's not an inspiration to get my ass in gear and stop worrying about recovering from a few weeks of inactivity, I don't know what is. So thanks for remembering me, thanks for helping to pick me up, and most of all, welcome back, Zach!

After yesterday's prologue, this is the first of seven trade post/collection introspection pieces in my slump-busting "series." So, stay tuned, if you're into that kind of thing. I promise more pictures of cards in the posts to come. We all know the cards are the real stars of these blogs, after all.