When It's All Mixed Up, Better Break It Down (or, "A Glowing Review for Gavin")

The 1990s were a strange time of transition. The '80s, love 'em or hate 'em, had a distinct personality that was more than ready to be discarded for something new by the end of the decade. But a whole new century was just around the corner, and that was going to be the time for reinvention. So we had this entire decade to live with a kind of unformed cultural identity in waiting. And when it wasn't boring, it was a minor disaster.

Those of us who watched the game of baseball, and especially the card collectors among us, are keenly aware of this. The decade saw, among other things, cardboard overproduction that nearly crippled the hobby, the dawn of what's come to be known as the steroid era, and a strike that gave us the first season without a World Series since John McGraw refused to allow his Giants to participate in 1904.

The 1990s also saw the beginning of a run of World Series broadcasting duties by this guy that continues to this day. 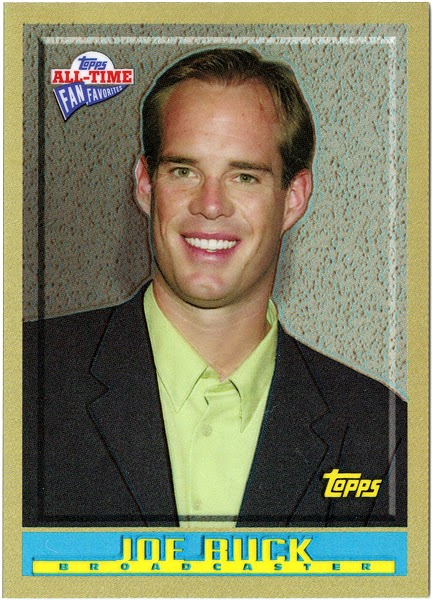 I got this card from Gavin at Baseball Card Breakdown. It didn't take much prying. Gavin hated this card so much that he wrote a post about it, where you can see it shine in all of its patented Baseball Card Breakdown Refractin' Action glory! I don't hate Joe Buck (or Tim McCarver, for that matter). But even if I did, I would absolutely want this card because of the type of collector that I am. I see my collection as something that should reflect as much of the history of the game, good and bad, as possible.

Since I was born in 1970, my life breaks up nicely into decades. What was for the the world the 1990s, was for me my twenties. Yup, the decade of transition from childhood to adulthood. Which for many people is the time that they essentially abandon play for the drudgery of work. And if you've been reading lately what I've loosely termed a "series," in which I contemplate how this blog fits into my life and my collecting habits, you'll know that the work/play dichotomy is very much on my mind.

Few blogs elicit the joy of play like Gavin's. Among other things, Gavin recently combined his love of baseball cards with his enjoyment of Legos to make some pretty nifty Lego display stands. He has a creative way of looking at this baseball card thing. He has an eye for the interesting. Gavin is the type to appreciate something as Random as finding more similarities than differences between these two very different cards that I requested from a recent trade bait post of his. 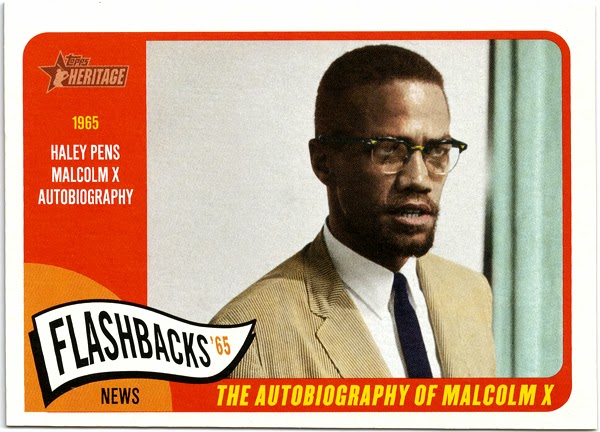 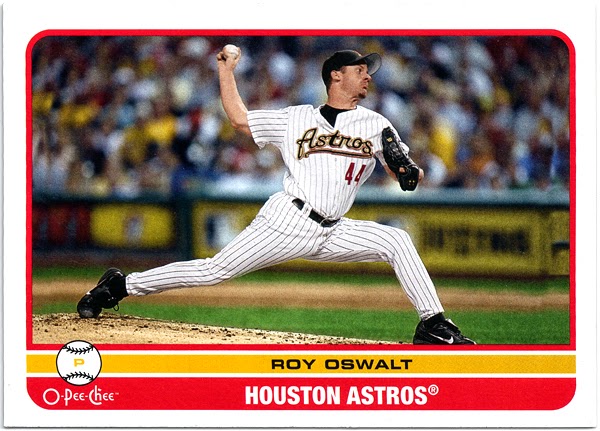 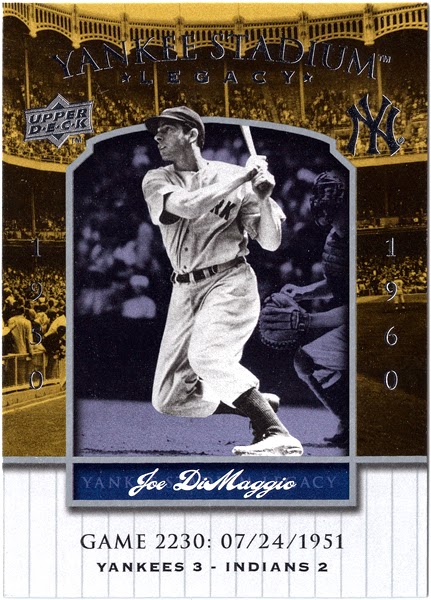 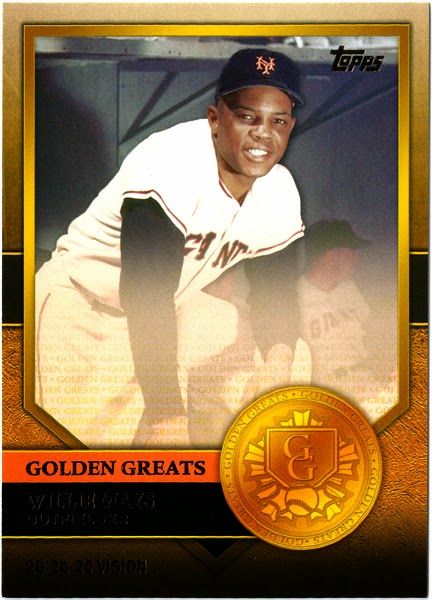 I couldn't pass up on these, either. The Yankee Stadium Legacy thing can get a bit tedious. But this Joe D in action is some sweet glossy cardboard-substitute. And, as I've mentioned, I missed out on 2012 Topps inserts by buying the factory set rather than busting packs. So, Say Hey, this one makes my day.

When it comes to Gavin, and his love of play, there's nothing to compare with his very own GAV (Glowing Altered Variation) cards. Gavin took his love of glow in the dark cards into his own hands, turning existing cards into custom night lights, which he's happily shared with the blogging community. I had long been anxious to get my hands on one, and Gavin surprised me by fulfilling that wish. 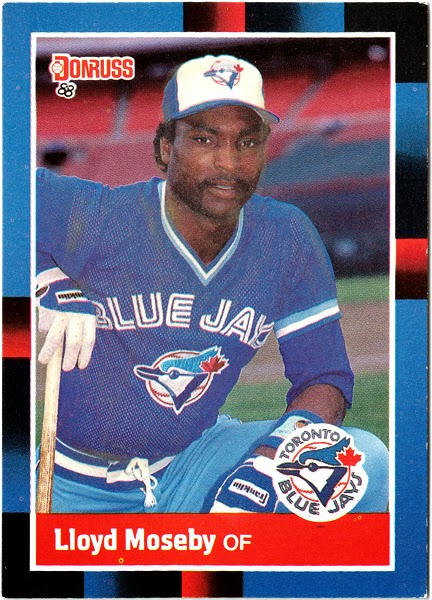 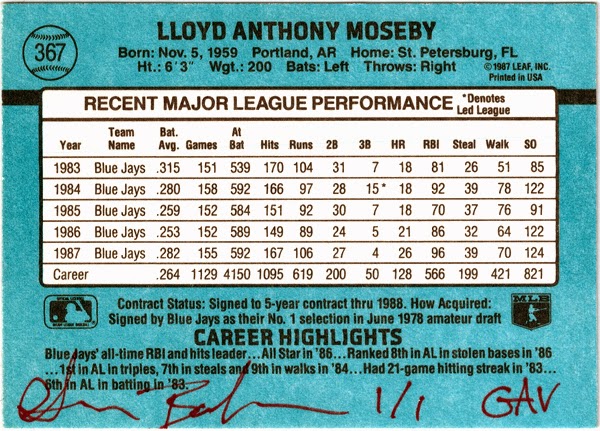 I don't have the technical chops to show the glow, but if you cruise by Gavin's site you can get an eyeful for yourself. Baseball Card Breakdown is definitely one of the must-read blogs out there, so do yourself a favor and make it regular reading if you don't already. In fact, if you stop by today, you'll note that Gavin would appreciate a '52 Mantle if you happen to have a spare. Hope that works out for you, man. Meanwhile, thanks for spreadin' the fun, Gavin!

This selection of cards from Gavin perfectly reflects the deep transition that my worldview undertook in my 20s. At the dawn of the '90s, I tended to see things in terms of black & white. I was offended by chaos. By the turn of the century, I had embraced the beauty (and inevitability) of the Random nature of existence. In fact, I remember the moment (though I couldn't tell you exactly when it occurred). I was in a plane, traveling alone, on a nighttime approach into LAX. Looking down at life happening below me, in all of it's chaotic glory, I was suddenly at peace with not knowing what was around every corner. Whereas I used to fear getting lost, I would begin to do so on purpose, in order to discover new and exciting surprises. And that change in attitude has radically redefined who I am as a baseball card collector.

Then again, there's one aspect of my habits that hasn't changed, and may never do so. But we're going to have to wait a few days before we get into that.

By the way, bonus points for those of you who recognized the lyrics in the title borrowed from the '90s version of Tears for Fears. It really was a strange decade.
Posted by petethan at 5:35 PM