What brings me out of my latest, greatest, no-blogging funk? The chance to win a contest, of course!

There's no sugarcoating it. I want every card in existence, and the only way that's gonna happen is if 99.99999999% of them come to me free of charge somehow. (It's not gonna happen.) Thanks to Jim of Garvey Cey Russell Lopes (GCRL), I have a chance to reduce the number of cards I need from a gazillion-and-one to just a gazillion. It wouldn't be just any card, either, but a magical 1952 Topps specimen!

Though my motives may be crass, I am also more than happy to wake up long enough to celebrate my Dodgers. And, at least when I was a kid, there was no player that represented my team more than Steve Garvey. In fact, in the formative years of my fandom, Garvey was to me the prototypical baseball player. The way he wore his uniform, the way he stood in the batter's box, and the way he took his stance on defense were, in my mind, simply the way it was supposed to be done. Anything else was a variation on the theme of ballplayer/Garvey, Garvey/ballplayer. 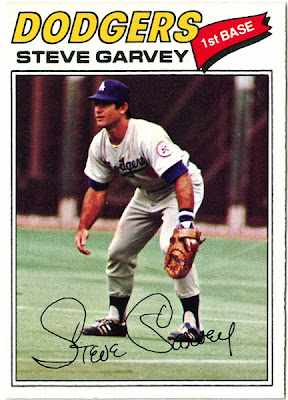 The Topps version of Garvey's 1977 card was the prototypical baseball card of my youth. The prototype of the prototype. It even got one of the very few posts on a blog of mine that lasted a few weeks in September of 2011. (See, this blog is actually an improvement!) So when I saw this O-Pee-Chee variation, sans all-star designation, I had to have it. This is what it looks like when a cartoon character, designed to be the "perfect" ballplayer, stands ready to play first base.

Here's hoping this post results in one less card in the world for me to still need.

And thanks for the contest, Jim.
Posted by petethan at 9:24 PM