Playing With My Dodgers: Larry Bowa

Larry Bowa is my kind of guy. A baseball lifer, passionate and knowledgeable, and just plain fun to watch work, whether as a player, manager, coach or commentator. I was pretty young when he retired as a player, but I have vague memories of the 1980 playoffs and World Series, and I saw him a fair number of times playing for the Cubs on Superstation WGN toward the end of his career.

He never played for the Dodgers, of course, but is a more-than-welcome addition to the Dodger family, having come from the Yankees to serve under Joe Torre in LA from 2008-2010. He certainly hadn't lost any of his fire. I remember him getting worked up on more than one occasion. I've enjoyed watching him on MLB Network for the past few years, but I'm glad to see him back in uniform, by the side of Phillies manager Ryne Sandberg (who was the seeming "throw-in" player acquired by the Cubs with Bowa for Ivan DeJesus in 1982). 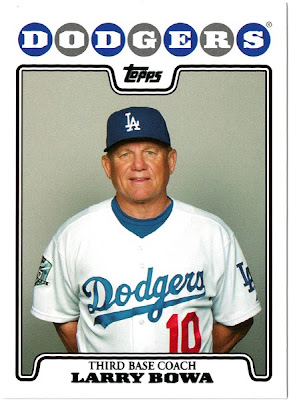 Yesterday I inducted two of the other cards from this set featuring members of the Los Angeles coaching staff into the PWMD pantheon. (Posts on back-to-back days? Shocking.) But this one is by far my favorite, and one of the main reasons that I went out of my way to track down the Premium Team Set.
Posted by petethan at 2:12 PM