Here we're gonna take a look at the O-Pee-Chee portion of my second Just Commons purchase (I've since made a third). My first buy from that site was split between O-Pee-Chees and Kershaws. For my second buy I took one more swipe at the Canadian gems and filled the other half of the order with future Playing With My Dodgers inductees. 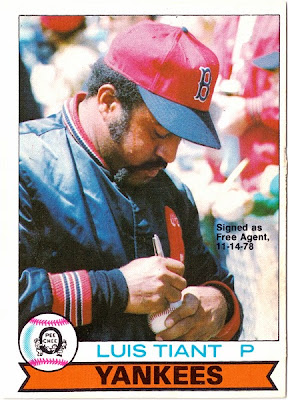 This card is a triple threat. I take a strange delight in cards of players who move between arch rivals. (Which really just means Dodgers-Giants and Yankees-Red Sox, as far as I'm concerned. Cardinals-Cubs is a bit too friendly to be interesting in this way.) The fact that Tiant is pictured in a Sox uni while being labeled as a Yank on the same card is its first virtue. The second is that Luis Tiant rocks (and twists, and turns, and gyrates with the best of 'em). The third is the Random factor, in this case the fact that, on a card with a caption that says "signed as a free agent," he's signing a ball. Random synchronicity. 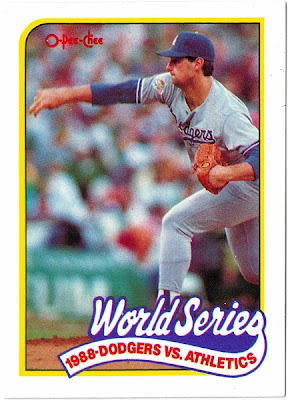 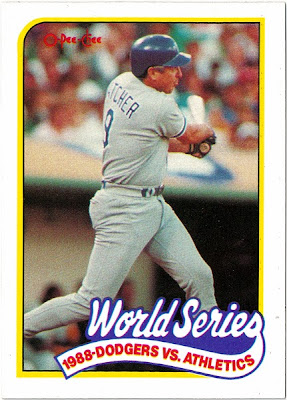 O-Pee-Chee one-upped Topps by producing World Series cards in their 1989 set. Being a Dodger fan, I am immensely grateful to our north-o'-the-border card-producing neighbors for this. I've long had the Game 2 (Hershiser) card. Unfortunately, Just Commons didn't have the Game 1 card (Gibson, of course), so I still need that one. They had Game 3 (McGwire), but I wasn't about to go out of my way to get the only Dodger loss of the series before I have the Gibson card. That would be wrong. 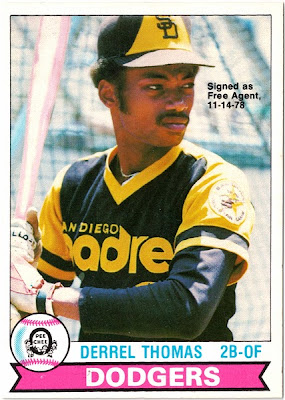 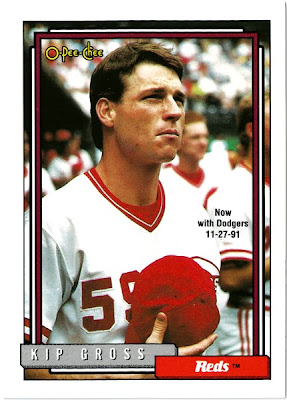 Unfortunately, Just Commons doesn't have any 1980 O-Pee-Chees on offer, but I guess I wouldn't be complaining if they didn't have the '79s and just started with '81. So I hereby retract my mild complaint. Derrel Thomas was for me a prototype, as he was the first player I became aware of who would play just about any position on the field. I thought that was so cool as a ten year old. Kip Gross didn't make a huge impression as a Dodger (40 innings over two seasons). In fact, I really wish he'd been traded to the Angels instead. How cool would this card be, with this picture, if instead it read "Now with Angels"? 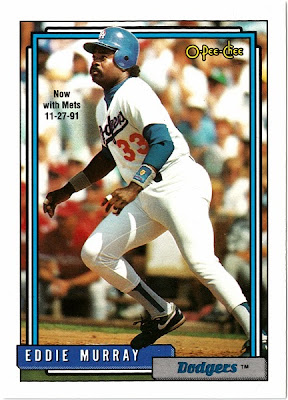 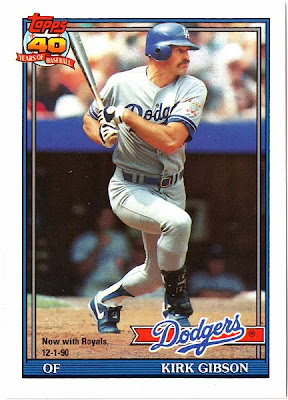 I was hoping to get the "Now with Dodgers" versions of these guys, but no dice. Since I couldn't get 'em coming, I got 'em going. 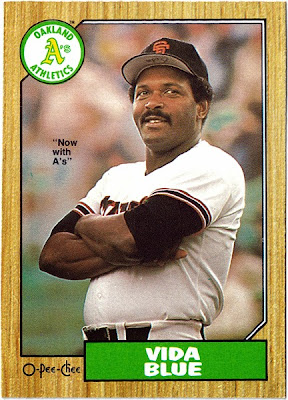 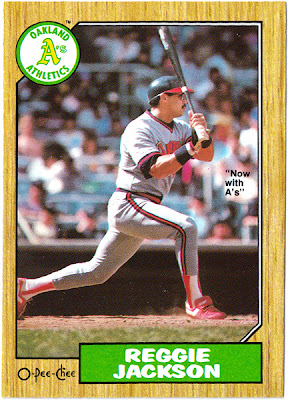 I couldn't pass up these fabulous swingin' A's cards, trying to recapture the magic of their '70s dynasty, right before the start of their '80s almost-dynasty (that the Dodgers helped to keep down). I also got the Ron Cey card (coming from the Cubs). Geeze, were they trying to be the Wheeze Kids, Part II? At least Eckersley worked out for them. (Except in the bottom of the ninth of game one of the '88 World Series! Whoo hoo! Worth mentioning at every possible opportunity.) 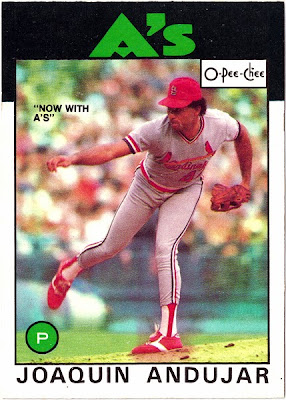 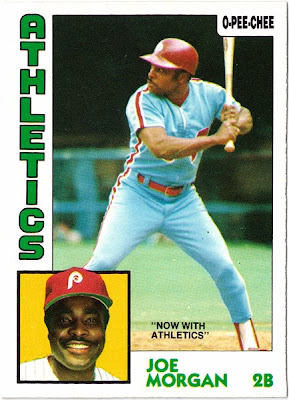 I actually got excited about OPC A's cards in general, mainly because I like the color green as a design element on cards. And these two have the added bonus of the festive holiday color combination. How cool would it be to decorate a tree with hundreds of such cards? Might have to make that happen some day...

The thing all of these cards have in common, of course, is that they diverge in some way from their Topps counterparts from the same set. It's unfortunate that Just Commons doesn't have any from 1977, because that set is the benchmark for variations. I was able to track these down easily by perusing GCRL's Oh My O-Pee-Chee blog, which is defunct, having exhausted its subject matter, but which serves as an excellent resource. Next to 1977, the 1992 set probably has the most desirable variations, including a good number of cards that didn't exist in the Topps set. For example... 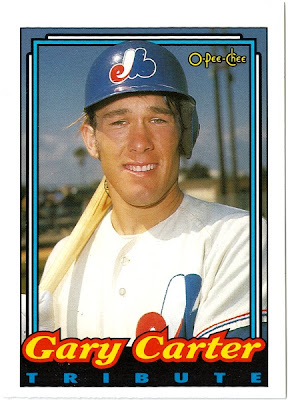 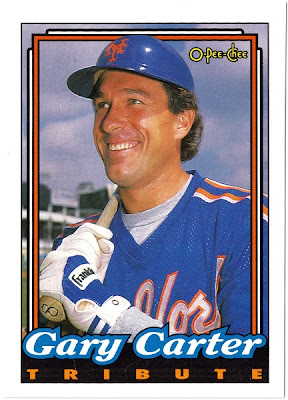 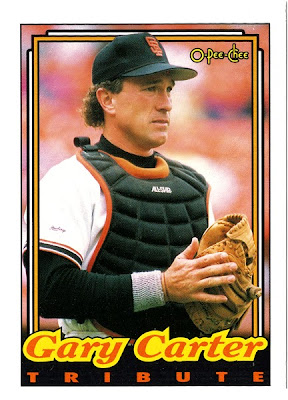 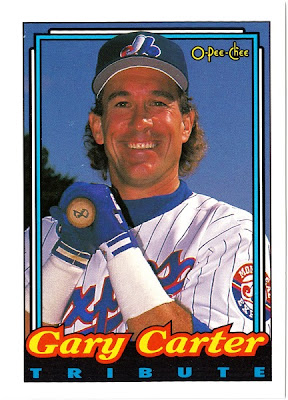 I had picked up the Dodgers tribute card in my first Just Commons order, but had passed these up in protest of the card featuring Carter as a Friggin' Giant. But I relented with this second purchase. It had been kinda churlish to ignore three other great cards for that reason. And having four of the five wasn't going to work for my OCD, so they're all here now. In reality, I'm really kinda glad, thanks to a deep, dark secret that I've been keeping (and occasionally alluding to on these pages). Maybe someday I will have the courage to confess it. But not today. 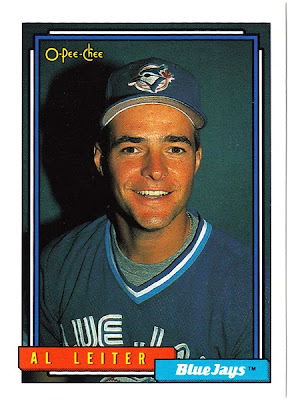 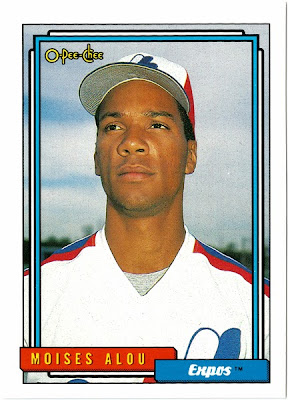 These two players didn't receive cards in the 1992 Topps base set because their playing time was limited (in the case of Alou, eliminated) due to injury the previous season. Just the kind of O-Pee-Chee oddball that excites a connoisseur of the Random, like myself. 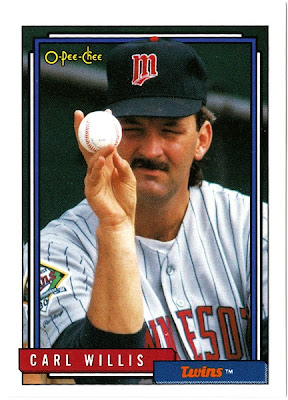 Finally, I couldn't pass up this glorious Getting a Grip sample, also a card not featured in the Topps set. The omission of Willis is harder to explain, given his 2.63 ERA in 89 relief innings for the World Champion Twins in 1991. Willis also earns points in my book for being a longtime pitching coach.

There are a few O-Pee-Chee gems that I still have to track down, but thanks to Just Commons, that list has been shortened considerably.
Posted by petethan at 2:10 PM

Email ThisBlogThis!Share to TwitterShare to FacebookShare to Pinterest
Labels: Getting a Grip, Just Commons, Mini-Collecting