There are times when Fan Appreciation Day is more meaningful than at other times. When a team is a perennial contender, like the Dodgers were for all of my childhood, it's hardly necessary to thank fans for following their exploits. But when a team has hit on hard times, as the Dodgers did (and, in terms of championships, still has) beginning at about the time I became an adult, fans who stick by their team deserve a little thanks.

The turn of the present century was a particularly dark time for the Dodger franchise, being the FOX ownership years. This was when tradition was thrown out of the window. The opportunity to promote AAA manager Mike Scioscia as the rightful heir to the Alston-Lasorda tradition was the thing that bothered me most. But there were plenty of reasons to divert my attention elsewhere.

I recently made a cheap eBay purchase that enabled me to partake in a bit of that team's attempts to placate its fans: these cool oddball cards that they gave out on Fan Appreciation Day from 1997-2001, and 2003. They came, perforated for removal, on 8.5 x 11 sheets that included promotional schedules and other assorted advertisements for the next season. I play with my cards, as you know, so remove them I did. They're actually pretty cool from a baseball card standpoint, if you can set aside the disappointment in the team elicited by the players portrayed. 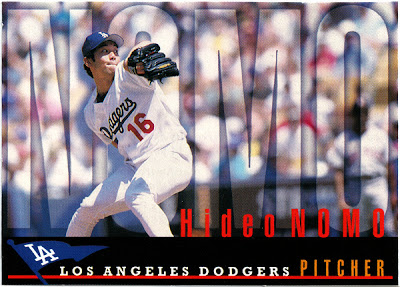 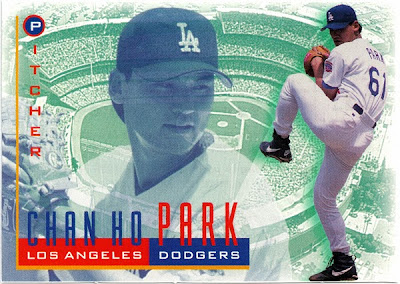 This was the only one among the sets here in which different designs were used for each card. Fittingly, the Nomo card is the best of the bunch, as he's probably the player here with the least amount a of disappointment attached to their Dodger days. The arrival of The Tornado from Japan was probably the most exciting thing to happen to the franchise in the 1990s. After a couple of phenomenal seasons, however, hitters managed to get used to his unusual delivery, and Nomo battled wildness during an itinerant stretch of his career in the middle of this time period.

Chan Ho Park gets a pretty nifty-looking card, too, which prominently features beautiful Dodger Stadium. He shows up again later, and we'll discuss the nature of his disappointment then. 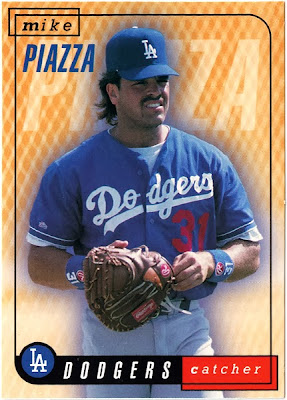 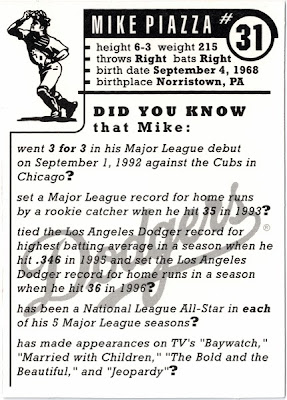 The disappointment surrounding Mike Piazza, of course, is that the Dodgers didn't manage to hold on to him. His card here isn't terrible, but it's the weakest of the batch. The card backs are pretty cool. Unlike the front, they feature a unified design, each with neat little iconographic player drawings. I can't say that I managed to catch any of Mike's television appearances mentioned here, but it's not hard to imagine his Baywatch meeting with Pam Anderson and her unnatural endowments (though it's a little disturbing to do so). 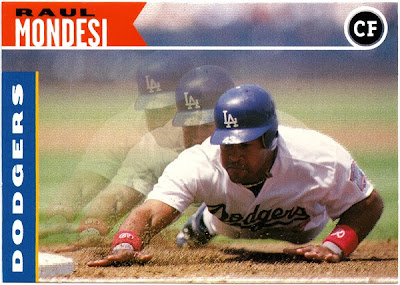 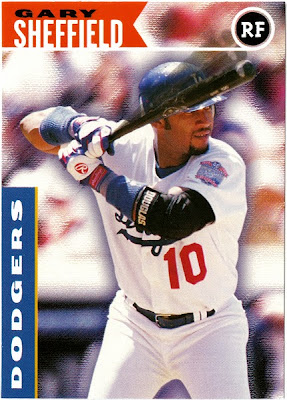 Here begin the unified card designs. This one is clean and unobtrusive, highlighting various stages of action. Super action: Mondesi sliding into a base (getting back to first on a pickoff attempt, I believe). Mild action (probably not the right term for Sheffield's violently-wagging bat): this card is great for helping to recall his unique batter's box ritual. Non-action: Karros blowing a bubble and waiting for the Bill Russell/Glenn Hoffman era to come to an end. 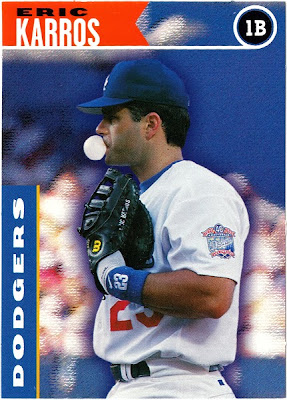 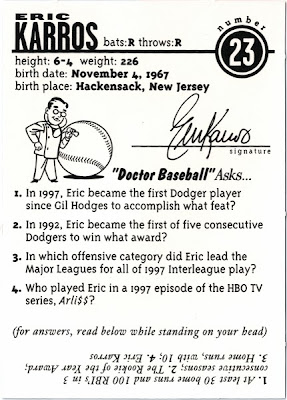 Disappointment: Mondesi had some pop in his bat, running speed, and a rifle arm out in right field. But he had no plate discipline and wasn't much of a "chemistry" guy. Sheffield was an awesome hitter, but at this stage of his career there was still no "team" in Sheffield. Karros, of course, is still the franchise home run leader, but he always suffered by comparison to Steve Garvey, which in Sabermetric retrospect, ain't so hot. At least he was better than Greg Brock.

We get to enjoy a visit to the office of "Dr. Baseball" on the backs of these cards, on which he examines our knowledge of each player. 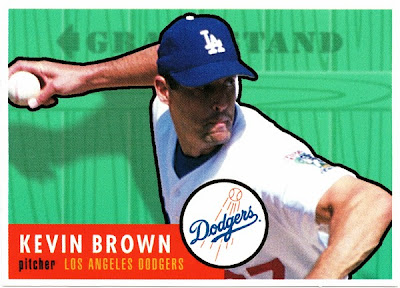 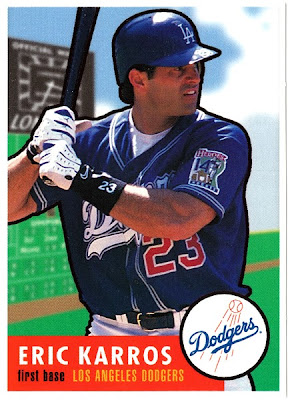 These are a little reminiscent of 1954 Bowman, I guess. Certainly of that era, in general. The big team logo is nice. I always dig green on cards. And the background concept is nice, in theory. A little less so in practice. Brown and Beltre look good. The Farmer John ad on Beltre's card is especially evocative of Dodger Baseball (you can't help but hear Vin Scully's voice extolling the virtues of the Dodger Dog). But what the heck is Karros doing in Forbes Field in Pittsburgh? 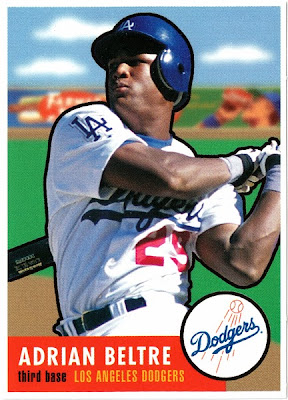 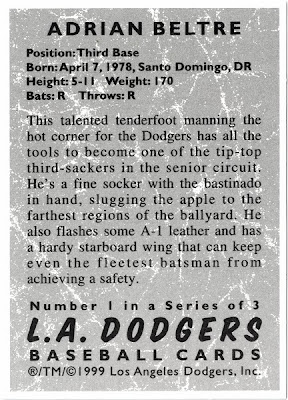 Disappointment: Kevin Brown was much like Sheffield, massively talented but unpleasant, and unable to help bring a pennant to Chavez Ravine. The disappointment surrounding Beltre is that the Dodgers managed to sign him too young, forcing the commissioner's office to declare him a free agent just as he was hitting his prime after a breakout season in 2004. Also disappointing are these card backs. Ugly, and with a truly lame attempt at old-school baseball lingo. 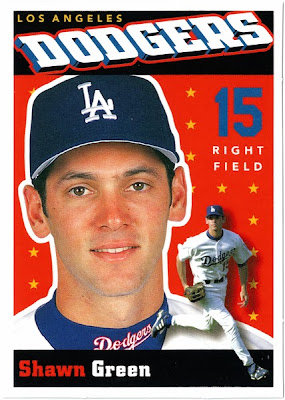 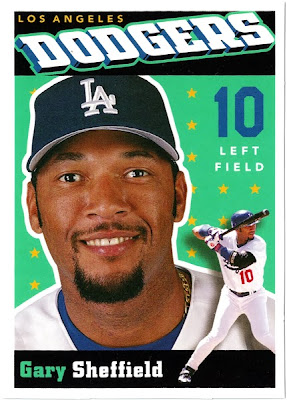 These are some really nice, colorful cards, blending the retro vibe with modern sensibilities. Gotta dig 'em. Unfortunately, unlike the previous sets, their aren't quite the standard 2.5 x 3.5 cards size, being about an sixteenth of an inch smaller in each direction. But close enough.

Shawn Green is the newbie here. He wasn't exactly disappointing. In fact, he took the field just about every day of his five years with the Dodgers and did his job, driving in runs from the middle of the order. His Dodger highlight was a four-homer game in 2002. But the Dodgers didn't manage to win while he was there, and he didn't exactly have a "Hollywood" personality, so his stint in Blue was largely forgettable (at least to me, from the east coast at the time), despite his success on the field. 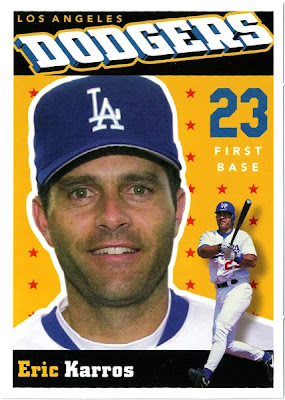 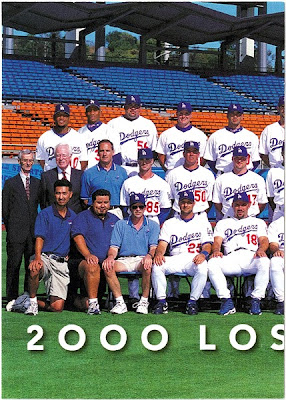 For the backs we get a team photo puzzle. I scanned all three and was going to put then together to show here, but the photo extended into the gaps between cards on the perforated sheet, so it made for an awkward full picture with some missing Dodger faces. You'll just have to settle for this glimpse of the enormous, hypertensive, unfortunately-named Mike Fetters looming large among this third of the group. 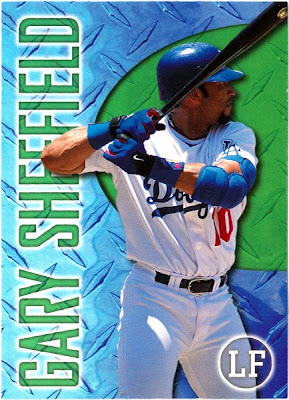 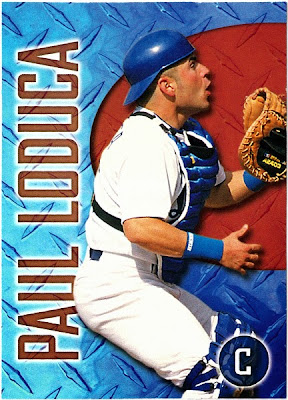 Not the best design, but not horrible. Interesting colors and textures. And the backs do a nice job of carrying the design themes over. Unfortunately, while the previous year's cards were a little smaller than standard size, for 2001, it got worse. They're slightly bigger than the standard, making them difficult to store with other cards stacked in boxes without damaging the edges. In fact, I'm not sure what to do: leave them as they are and take the inevitable damage over time, trim the extra sixteenth of an inch off of them, or store them separately with the other too-large cards, such as 1989 Bowman, '80s-'90s Topps Big cards, and 50's Topps and Bowman issues. (I decided to trim them, and they look fine. Hope I didn't give any condition-sensitive people out there heartburn.) 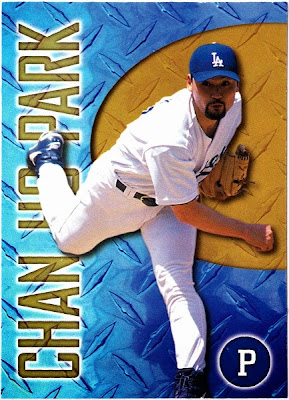 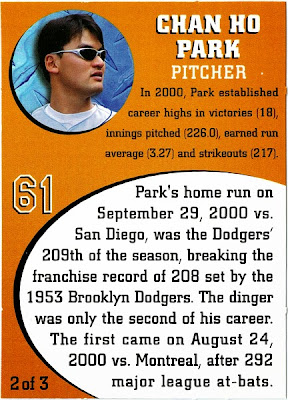 Disappointment: My first-ever visit to Candlestick Park (talk about disappointments... what a dump!) encapsulated what was disappointing about Chan Ho Park. On April 17, 1996, making the third start of his career, he struck out six batters in two innings... but also walked five and was removed in the third inning without recording an out. (The Dodgers went on to beat the Friggin' Giants, 11-2, I'm happy to say.) Park never quite tamed his control enough to achieve the stardom predicted for him, though he did end up having a long and largely-productive career, especially if you ignore the two grands slams he gave up to Fernando Tatis... in one inning! 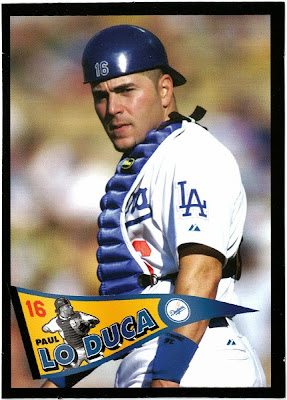 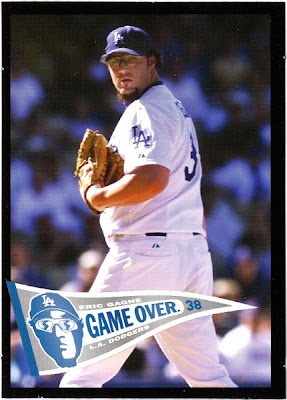 Not sure why they didn't do this in 2002. The team managed to break the 90-win barrier for the first time during this period (although they still finished third in the division), so maybe they didn't think the fans needed baseball card consolation prizes in '02. But they were back down to 85 wins in '03, which is fortunate at least for the excuse to bribe fans with more cool cards. And these are some of the best-looking of the bunch. Back to standard size, with cool black borders. And I especially love the custom pennants for each player. I wonder if they sold pennants with the same design at the stadium. The backs are nice, too, featuring another action photo in an uncluttered black-dominated design.

Disappointment: Two of the biggest. I never really jumped on the Gagne bandwagon, from the standpoint of becoming a huge fan of the player, though I was certainly awed by his "accomplishments" at the time. So his fall didn't hurt all that much. Lo Duca, on the other hand, was the biggest disappointment of the steroid era to me, personally, as he was my favorite player for a time. These two cards make me sad, which is a shame because they're pretty fabulous-looking cards. 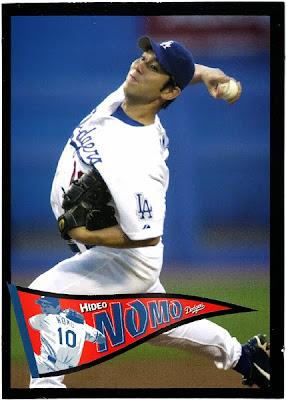 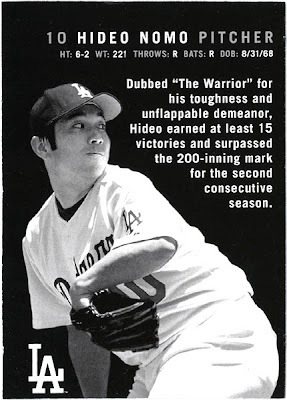 Fortunately, it all comes full circle, with "The Warrior." (I don't remember that nickname capturing the imagination like "The Tornado" did). After being largely ineffective for five teams over the course of the past four years, Nomo returned to the Dodgers in 2002 and put up back-to-back 16-win seasons before losing his effectiveness for good.

It was difficult to appreciate these Dodgers teams, but with a little distance to ease the pain and apathy, these cards help to lessen the disappointment a little, and I appreciate that. Mission accomplished, Dodgers.
Posted by petethan at 7:08 PM