I know, I know... it's mid-August. And I'm just now posting about cards I opened on the first day of the month. You didn't think I was gonna be able to keep up the crazy pace I set in this blog's first month, did you? (If you blog yourself, I know you didn't.) It's not so much the writing. After all, I can do that at work. It's the scanning that gets me backed up. Oh, and the fact that I also like to spend time opening, looking at, and sorting cards. You know, as in "Playing With My Cards." So why am I wasting time making excuses? Let's play...

A pack of '13 Gypsy Queen netted three retired dudes with Cooperstown plaques: Early Wynn, Lou Gehrig (sporting a sweet 1939 Worlds Fair patch) and a mini Eddie Murray. The repack haul was unimpressive on this night, the highlight being this majestic shot of Vlad the Impaler, dwarfing the stadium's light standards: Guerrero would also show up in a three-card UD "Superstars" bonus back from a blaster. 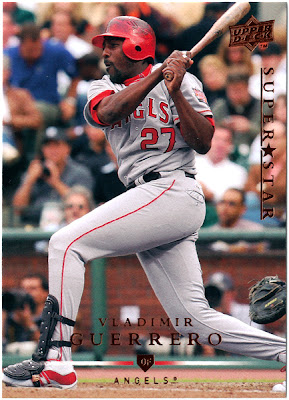 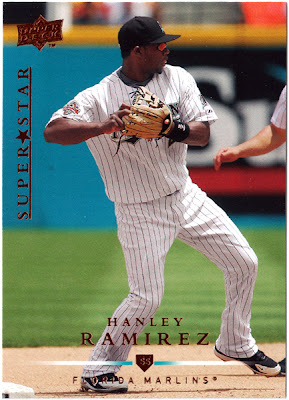 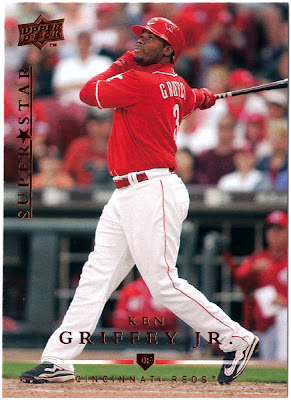 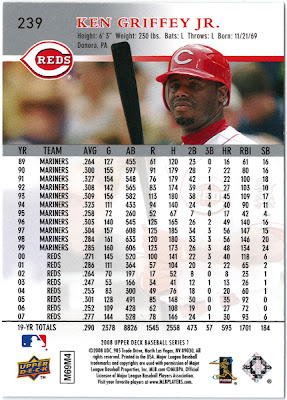 Apparently there were ten cards in this insert/parallel hybrid (the cards are numbered the same as each player's base card). I guess I did all right here. The David Wright or the Jeter would have been nice, too. It's actually kinda frustrating to have three cards of a ten-card set. I guess that's the OCD pack-rat in me coming out. Also, how annoying is it that it's a ten-card set that comes in packs of three? They'll do whatever they can to milk you for your last dollar, won't they?

A pack of '07 Ultra came with a pair of ancient crafty lefties. 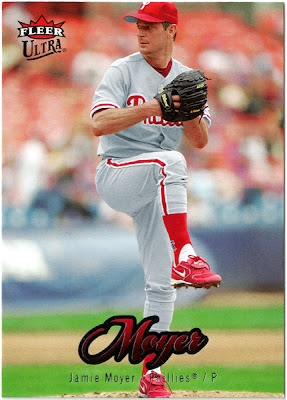 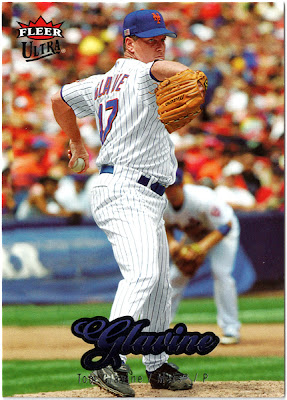 I would really like this set, except that the photography seems to have been rather bland. I dig the name plates. That font looks great with the foil-outlined color-graded goodness yelling out the player's name. As with a lot of the shiny shenanigans on cards, this looks better in hand than on the scans.

From a pack from my box of '92 Pinnacle I pulled what is likely to be my favorite base card from the set. 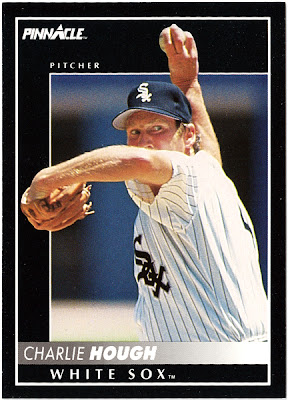 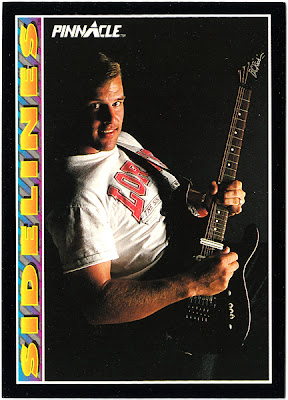 That's one sweet card of Rough Tough Charlie Hough! It uses the card design to its fullest potential. We'll take a look at how things can go wrong with this design sometime soon, but in this case it's all good. When I saw the Wetteland card I thought, "Oh sure, another player who noodles with his guitar and thinks he's a musician." Turning the card over, however, you find out that John's dad was a pianist, and John plays the saxophone and the clarinet in addition to guitar. I guess this is a cool-looking card, but I think I would have preferred a nerdy clarinet shot instead. Of course, if this set came out in 2013 there would be a short-print parallel of that.

Okay, now on to the exciting stuff... 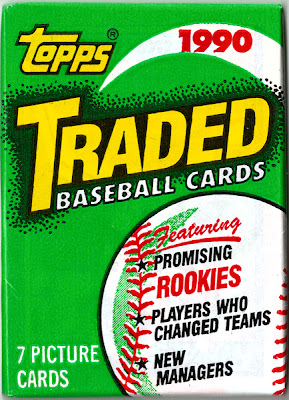 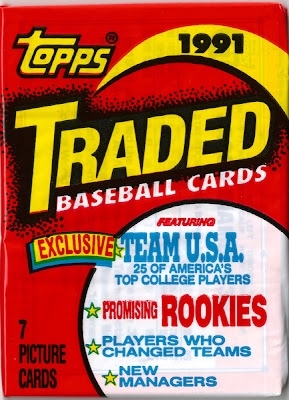 Yup, those are Topps Traded wax packs! You might remember from a previous episode of Feeding the Habit that I discovered the existence of these things thanks to a repack. And if you've been following my ramblings back to the early days of Top of the Topps (has it really only been four months that I've been doing this!?), you may also recall how much I wished the Traded sets had been printed on the same card stock as the base sets. I don't get my wish fulfilled for 1983 through 1989. But, thanks to the magic of eBay, I've got a 36-pack box of wish fulfillment for both 1990 and 1991. A little math reveals that I will be busting 252 cards out of packs for each 132-card set. That means I'll probably come up 2-3 cards short of each complete set, by Murphy's Law of Averages. But it also means I'll have a good number of spares. So if there are any team or player collectors out there who need real Topps Traded baseball cards from these sets, rather than those radioactive factory set versions, here's your chance. Let me know. 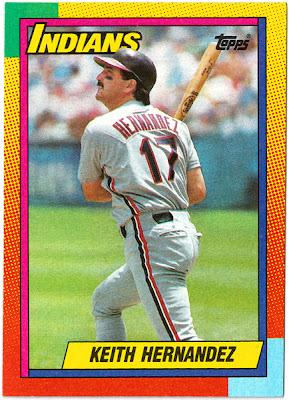 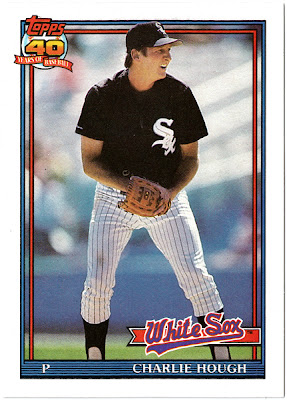 I won't be showing a lot of these here, since these sets lay in the future for Top of the Topps. Keith Hernandez in the unfamiliar Cleveland uni was the first card I busted from one of these packs. And my first pack of '91 featured RTCH. If I got to pick which of the radioactive Traded sets (1983-1991) I would prefer to have in real baseball card form, my first choice would have been 1983, followed by 1986 and 1987. As it turns out, 1990 is probably the set least helped by reverting to old-school stock. That's because Topps radically changed the color scheme of the borders for the Traded set, making a seamless continuation of the base set impossible. Look forward to that rant on TofT when we arrive in the '90s there. The 1991 set, on the other hand, is ideal for this purpose (it would have been fourth on my wish list). It's the last of the traditional card-stock sets, which makes for a perfect situation to have both the old-school and the bright-future sets to represent the transition. If I have any beef here, it's that these Traded cards seem to be on slightly thinner stock than the '91 base set. They feel a little more like '89s than '91s. But that's quibbling. I'm thrilled that these exist, and even happier that I'll be busting 'em outta packs for weeks to come.

That, however, would not turn out to be the highlight of this Card Night for me. That would be this fantastic 30-card 1987 Albuquerque Dukes set, which I added as a combined-shipping throw-in with a Dodgers Target set that I ordered. I had no idea how much fun I was getting myself in for with this set. Of the 26 players depicted, a whopping 20 managed to get into an MLB game at some point in their career, including such longtime Dodgers as Jeff Hamilton, Tim Crews, Tracy Woodson and Chris Gwynn. And I'm sure there will be a player or two on the fringes who will be represented in the PWMD set by one of these cards. It's a beautifully amateurish set, co-sponsored by the Albuquerque Printing Company and D.A.R.E. They're printed on stock that's not much thicker than photo paper, and they come in various sizes approximating the standard 2.5 x 3.5. Plus, you can see the apartment building I lived in for the summer of 1994 over the right shoulders of many of the players in the set! 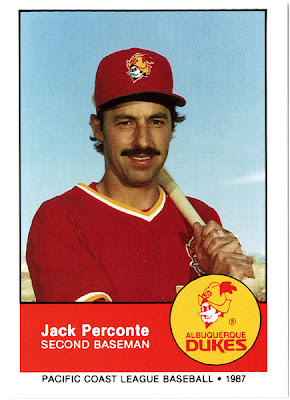 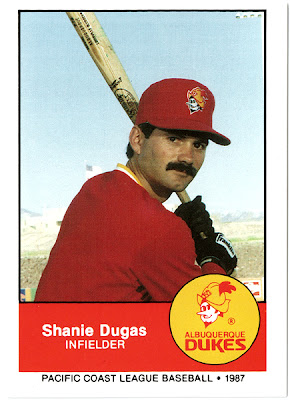 Appropriately, the card that topped the stack when I got the set was Perconte, a cult favorite. I particularly like this card because it comes from his later stint in the Dodgers organization, after his not-entirely-successful attempts to hold down the second base job in Cleveland and Seattle. My favorite of the six players who never made the show has to be Shanie Dugas, a utility infielder who also happened to pitch two scoreless innings of relief, making him the Skip Schumaker of the '87 Dukes. Also, you gotta love that the Albuquerque Printing Company allowed something like that border tape snafu to happen in the upper right corner of this card. Way to blow your advertising opportunity! 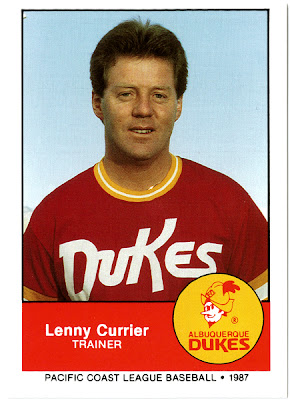 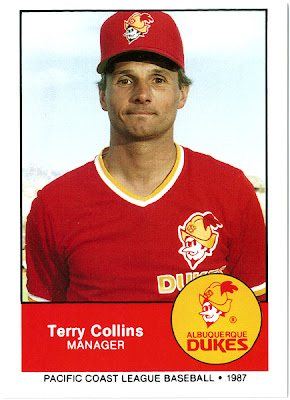 All four of the non-players in the set have major-league experience on their resume. In fact, although his big-time work lay ahead, trainer Lenny Currier's card actually features his resume on the back! He would go on to bigger (though not better) things, as a trainer for the NBA's Philadelphia 76ers and Orlando Magic. Pitching coach Brent Strom was a former big-league pitcher who would later coach for the Astros and Royals. Hitting coach Ben Hines would serve in that capacity for the Dodgers. And, of course, Mets skipper Terry Collins, who managed Albuquerque from 1984-1988, is currently guiding his third big-league club.
Posted by petethan at 1:30 PM