I Was There: Jackie Robinson's #42 Is Retired

This is Part III of a series (and a contest) that was introduced here. 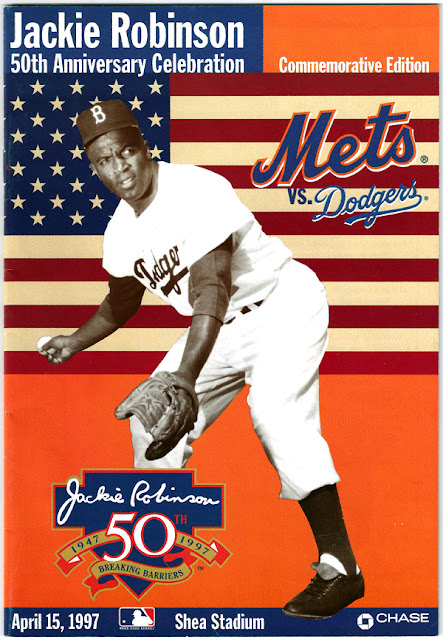 This was one of the very few times when the baseball game itself was a forgettable afterthought. For the record, the Mets beat the Dodgers 5-0. Five-and-a-half months later, the season would end with neither team continuing into the post-season, each finishing with identical 88-74 records.

But the sellout crowd of 54,047 on that chilly Tuesday night at Shea wasn't really there for the game. This was the 50th anniversary of the day that Jack Roosevelt Robinson broke baseball's sad and pathetic color barrier, making his big-league debut for the Dodgers at Ebbets Field in Brooklyn. And Major League Baseball had something unprecedented in mind for the occasion.

After Jackie's grandson, Jesse Robinson Simms, threw out the ceremonial first pitch, the game got underway with an anticipatory buzz filling the ballpark. From our seats high above the home plate area, my friend Odin and I had the perfect view of the flashing lights of the presidential motorcade as it made its slow approach toward Shea Stadium during the early innings of the game.

At the end of the fifth inning the game was halted and a podium quickly set up around the second base area. Jackie's wife, Rachel Robinson, Commissioner Bud Selig and President Bill Clinton took the field, the President on crutches following a recent golf-related knee surgery. 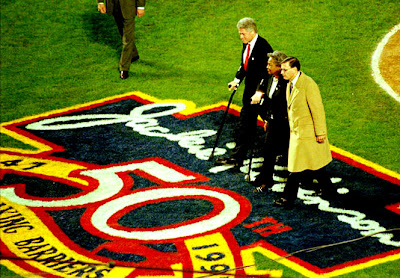 Then President Clinton: "Today every American should give special thanks to Jackie Robinson, to Branch Rickey and to all of Jackie's teammates with the Dodgers for what they did. This is a better, stronger and richer country when we all work together and give everybody a chance. He scored the go-ahead run that first day in the major leagues, and we've been trying to catch up with him ever since."

Finally, Rachel Robinson: "I believe the greatest tribute we can pay to Jackie Robinson is to gain new support for a more equitable society, and in this heady environment of unity it is my hope that we can carry this living legacy beyond this glorious moment."

Then the game continued. And nobody cared. The stadium was, maybe, 20% full by the time the Mets put three runs on the board in the seventh to put the game away. Butch Huskey, now officially the last player to wear 42 for the Mets, struck out in his final two plate appearances. Maybe the pressure of wearing the number was too much for him.

I've been to many baseball games. But this is the only time that I've been in the presence of a U.S. President. And I was there the night Jackie Robinson's number was retired across all of Major League Baseball for all time. Surreal.

As for the Surreal Seven contest, the shutout continues. Nobody was able to come up with the games at The Big A, Kingdome, or Shea Stadium. But we're about to take up residence in the House That Ruth Built, so you know there's some winning on the horizon. Stay tuned.
Posted by petethan at 6:51 PM