In my last post I revealed that I was there the night Jackie Robinson's #42 was retired by Major League Baseball. I'm a Dodgers fan. And I'm a fan of civil rights (which is about as political as I want to get here). So this mini-collection seems like a natural for me.

I now collect cards of major league players wearing #42, after it was retired by MLB, and as long as they weren't among the thirteen players wearing the number in 1997 who were allowed to continue doing so. At first, that sounds like some kind of impossible brain teaser, until you remember that everyone now wears 42 on Jackie Robinson Day. So, in other words, I collect cards with pictures taken on Jackie Robinson Day, where you can clearly see the uniform number.

Here's what I've found so far. 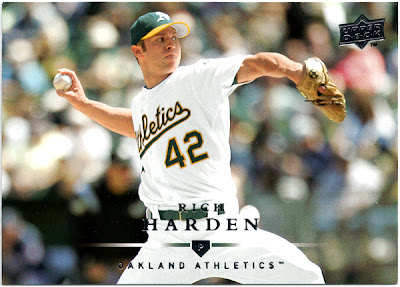 The number is featured so prominently on this card that even I managed to notice it. It's the card that got me thinking this would be a nice idea for a mini-collection. I frankly have no idea how prevalent such cards are. I haven't done any research, and I don't plan to, yet. I have no idea what year they began this tradition. I have a vague recollection that it was one player per team who wore 42 at one point. But I kinda want to find out about it as I go along and infer the facts from context.

Of course, I could have included the thirteen grandfathered players. For the record, here's the list: Mariano Rivera, Mo Vaughn, Jose Lima, Butch Huskey, Scott Karl, Tom Goodwin, Lenny Webster, Mike Jackson, Dennis Cook, Jason Schmidt, Buddy Groom, Kirk Rueter and Marc Sagmoen. The idea of getting people to send me all of their Mariano Rivera cards was a tempting pipe dream.

Actually, I do think I'll try to find one card for each of those players, if possible, which prominently shows the uniform number. That seems reasonable. (Though probably not possible. I'm looking at you, Marc Sagmoen.)

Oh yeah, and then there's this guy. 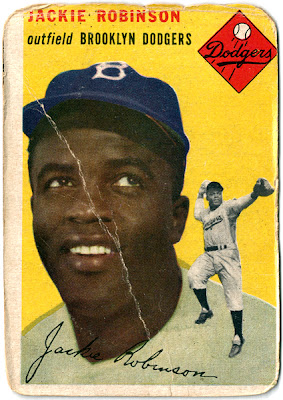 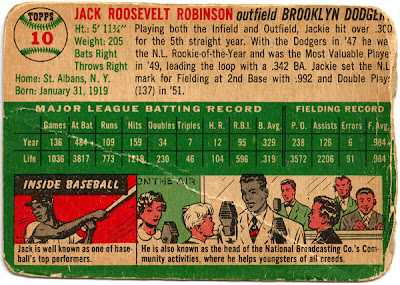 I know you can't see a uniform number, but I think we're probably all willing to give this guy a break, right? So this will be the honorary Jackie Robinson card for this collection. Incidentally, this is yet another card given to me by my cousin Craig about thirty years ago from what was left of his childhood collection. Truly a gift that keeps on giving.

That makes it three mini-collections, so far. I had ideas for about five or six others, but I don't want this getting out of control. Plus it's more fun when they mean something to you. So I'm just going to reveal one or two more, and leave it at that for now. Then I'll put together a little primer about the subtle details and other Random BS, and we'll be off and running with the Playing With My Cards mini-collections.

2) I have not seen the movie, 42 (or Moneyball, for that matter). The answer to the question forming in your mind: many things. Many things are wrong with me. But I'm not sure which things, exactly, contribute to my delinquency in watching these films. I'll get around to it. I promise.
Posted by petethan at 6:41 PM