Nick's brilliant choices as my Dime Box Card Show proxy shopper had me giddy from the start. I mean, just looking at groovy cards like this has to give you the warm and fuzzies... 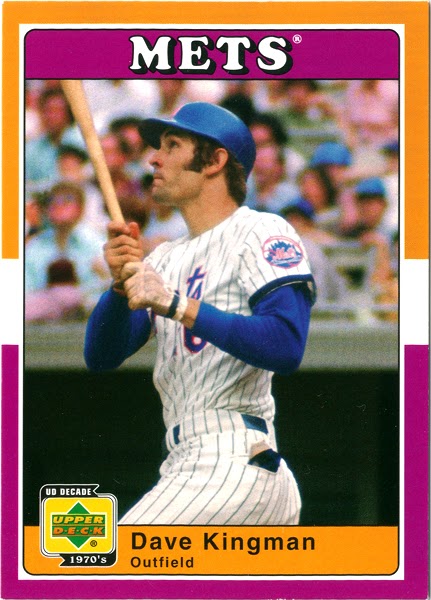 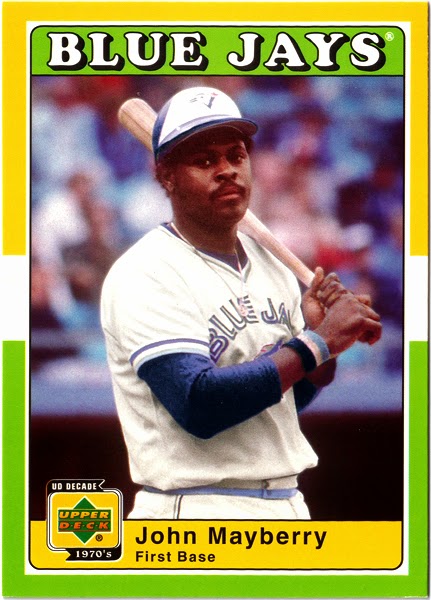 But then something odd happened about the time that Nick passed me this... 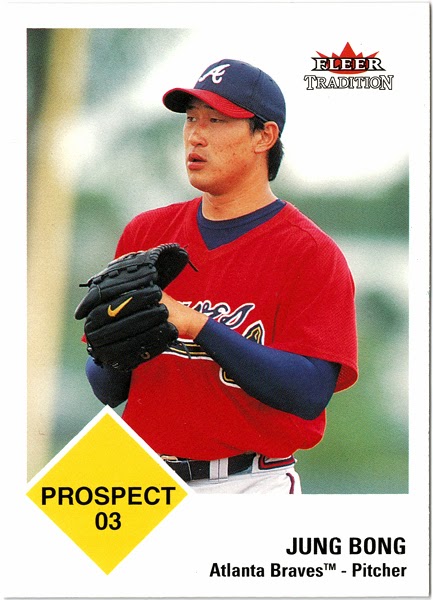 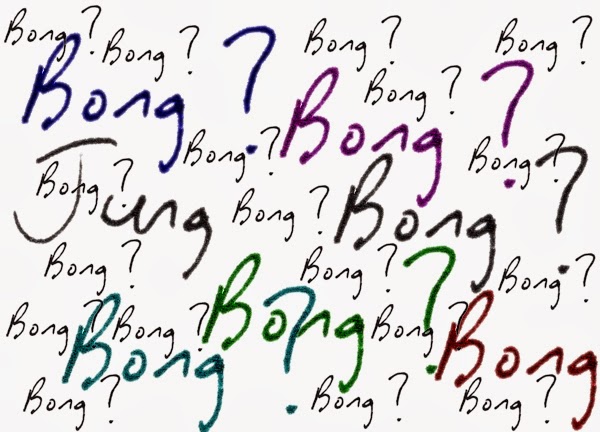 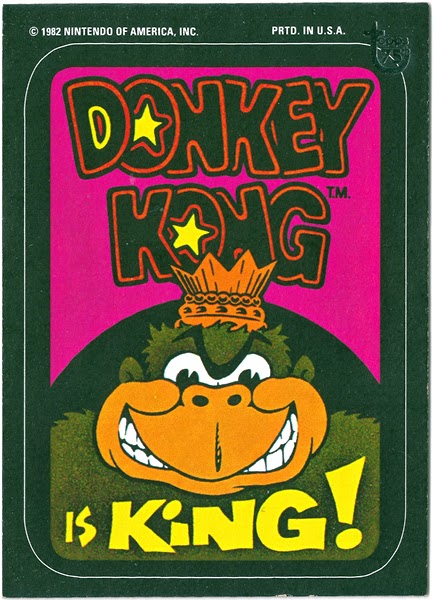 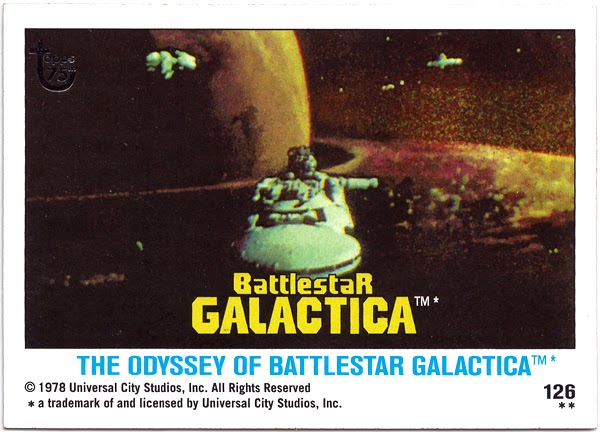 Suddenly I found myself thinking about my childhood, back when people didn't give me funny looks when I said I felt like playing. Visions of sitting in front the the Atari with a six pack of Pepsi by my side came floating through my brain. I said "felgercarb," whatever that means, as a barrel came rolling toward me at dangerously high speeds. I saw a robotic dog and a mad gorilla. I remembered that I had a crush on Erin Gray, though I couldn't remember who that was. It was just so... what's the word...? 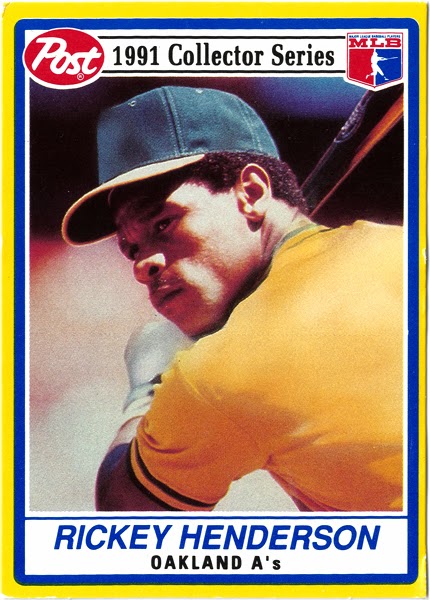 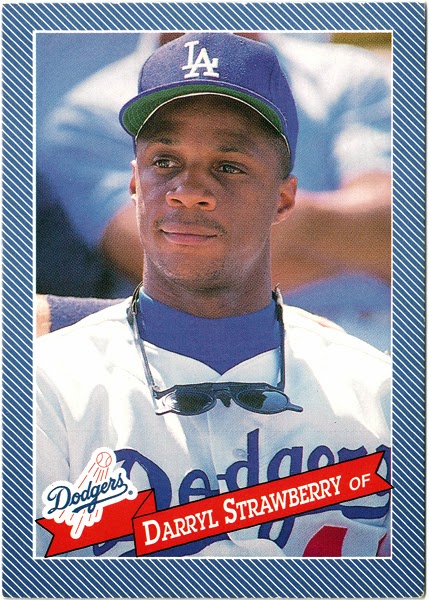 Then, just as suddenly, I was hungry. I wanted cereal with strawberries. I wanted Ding-Dongs and Twinkies and Sno Balls... 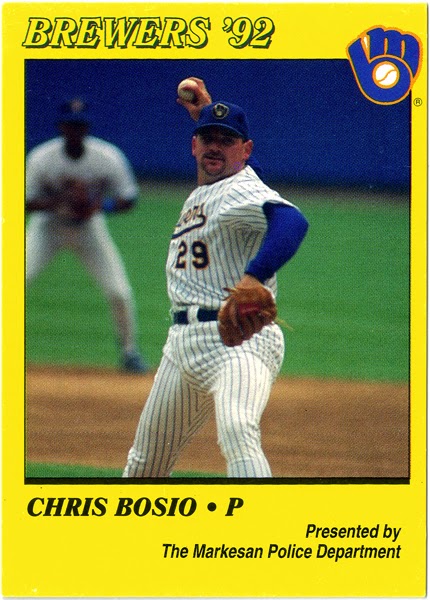 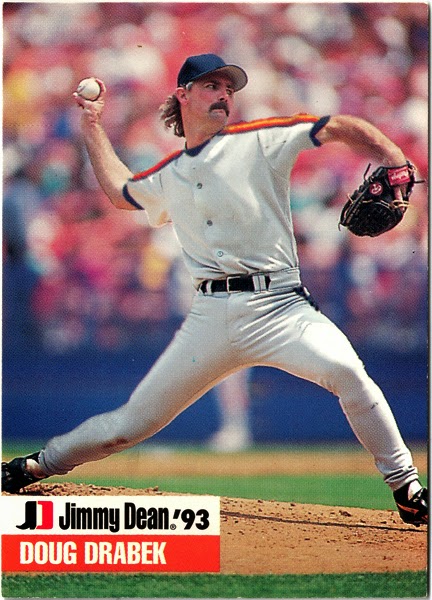 I wanted sausage, too. And I began to develop an irrational fear of the police. Dude, I wasn't doing anything wrong. Why did the fuzz wanna harsh my buzz? (Wait, I have a buzz...?) 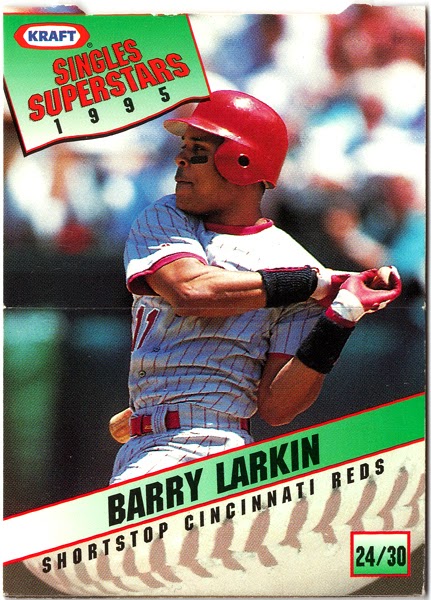 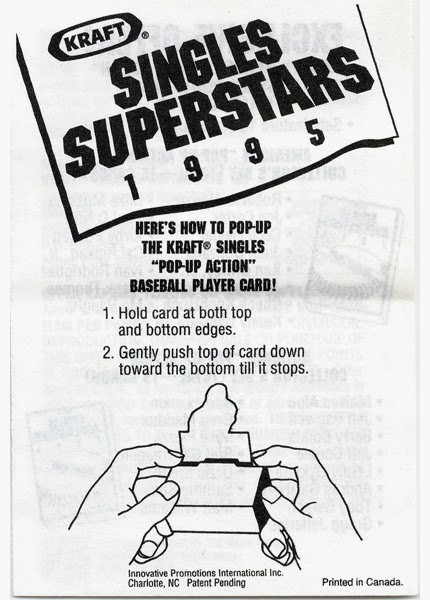 (Why do I have a buzz...?) Ooooooo, look! Cheese slices. These will go great with that sausage! And there's a baseball card... with instructions? Woah. After reading the instructions, like, eight times, I finally gave up and started tugging and pulling on different parts of the card. I mean, I had to play with the thing, right...? 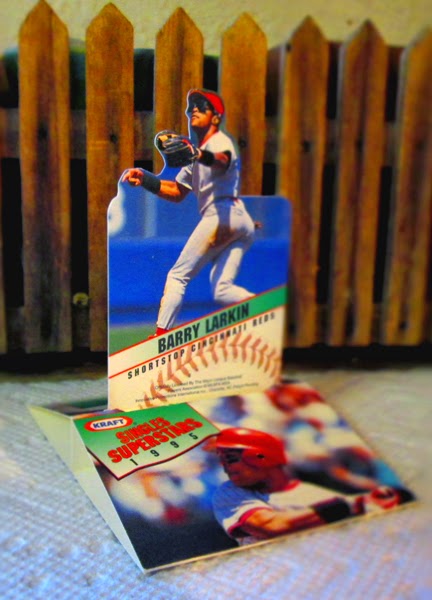 What was I talking about, again? Oh yeah, I think it was baseball cards or something... 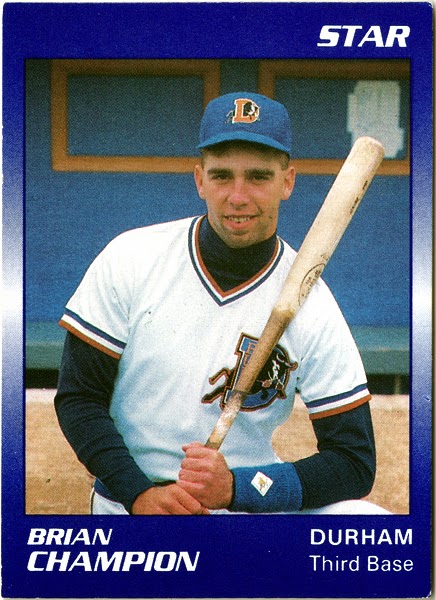 Wow, this guy must be good. He's a star. He's a champion... bull rider...? Is that how his teeth got that way? And what's that stuck to the end of his bat? And isn't he worried about that giant set of eyes watching him? You see them, don't you? It's not just me, is it? Why am I so paranoid!?

Com'ere. Lemme tell you a secret. I don't know if I should be telling you this, but the Dime Box king sent three dime bags in this package. They were minor league team sets for a cool dime apiece. Too bad you can't just walk up to some guy in the park and buy stuff like this. 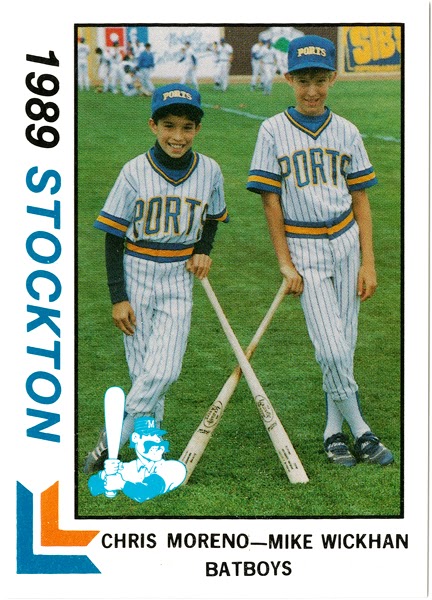 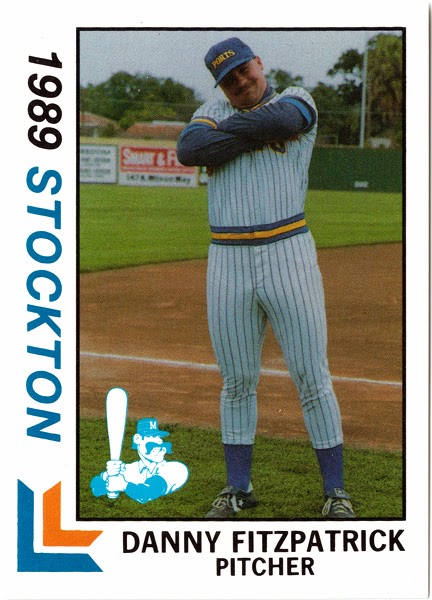 Where else are you gonna find batboy cards, or a big burly Irishman who doubles as a bouncer when the game is over? (Is that logo a drawing of the bouncer holding a bat!?) 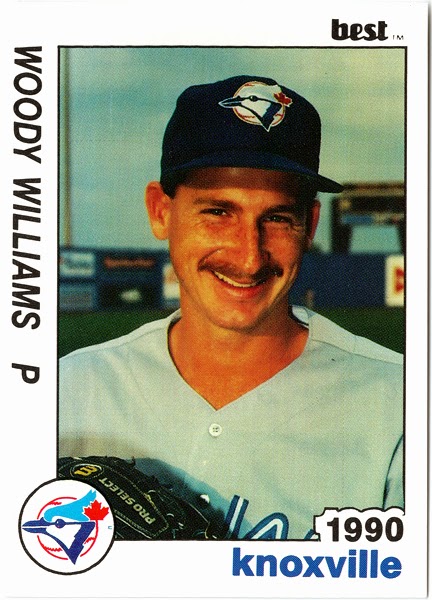 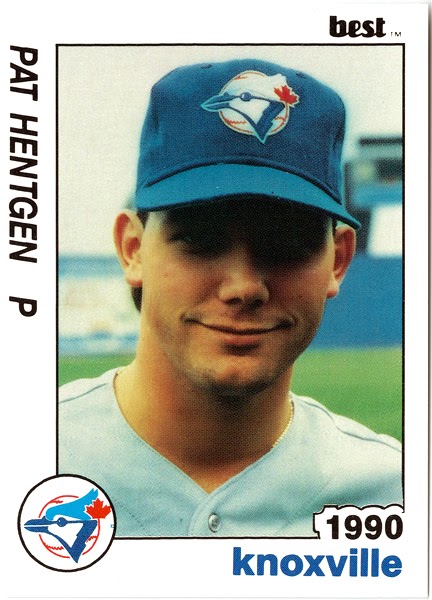 Where else you gonna find future solid major-league pitchers who are now retired with baby faces, just getting started? 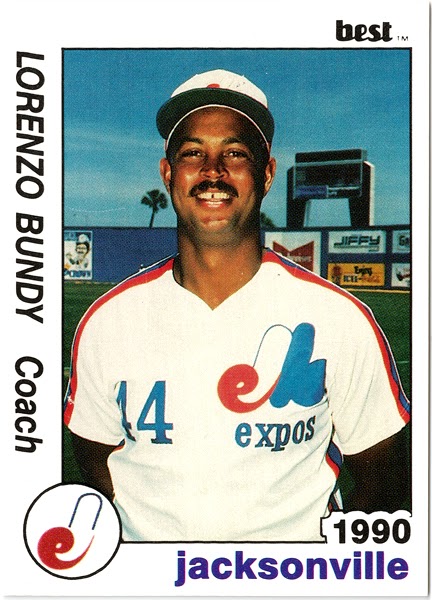 Or a guy who clearly lost a bet? (I'm not the only one who sees a stuffed little guy on his lap, right?) Or your first card of the new Dodgers third base coach? And how about that logo? They took the Expos logo and rolled a J for Jacksonville. The logo sure looks happy to be here, doesn't it?

Those minor league cards were great, huh? You're certainly not gonna get stuff that good from that guy who's always standing on the corner in a trench coat, even when it's eighty degrees out. Wow... These cards are really starting to get to me. I'm not sure how much more I can handle... 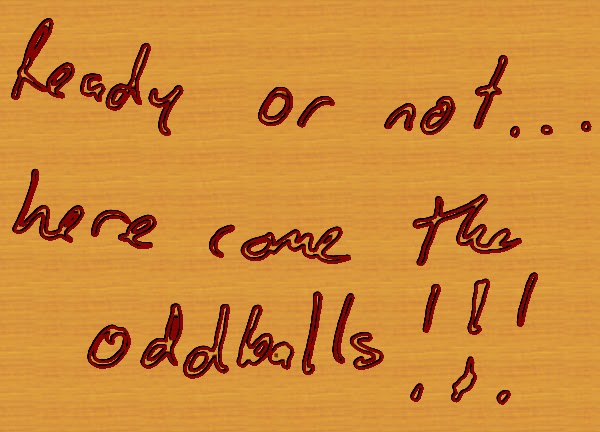 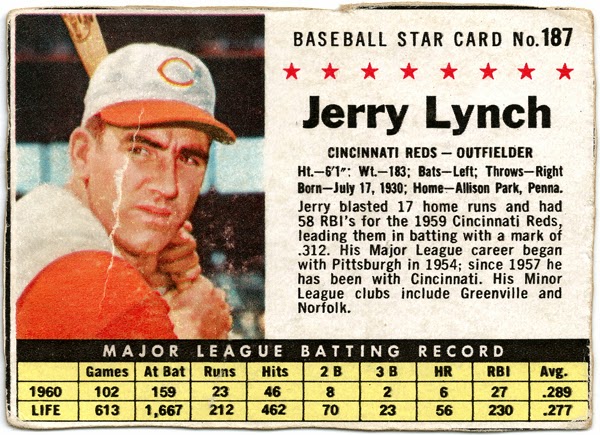 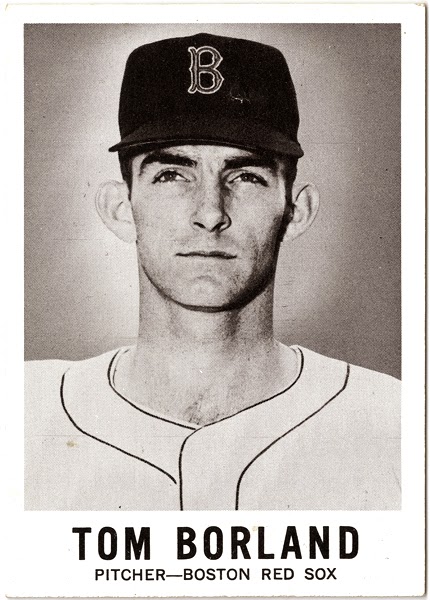 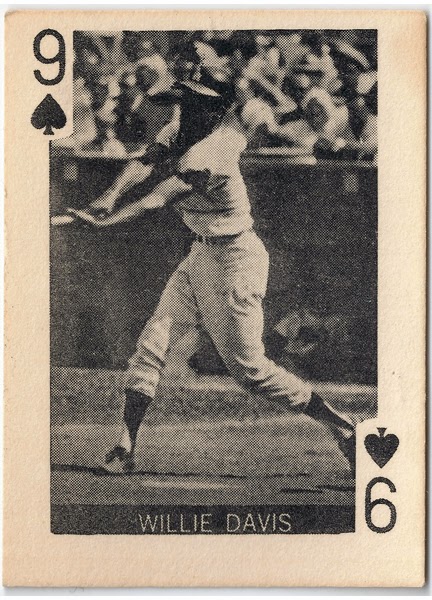 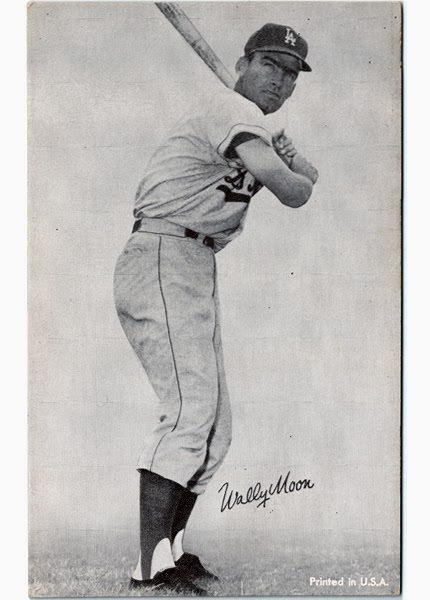 Now my sense of proportion is starting to go. I could have sworn that one of these cards was tiny and the other huge! 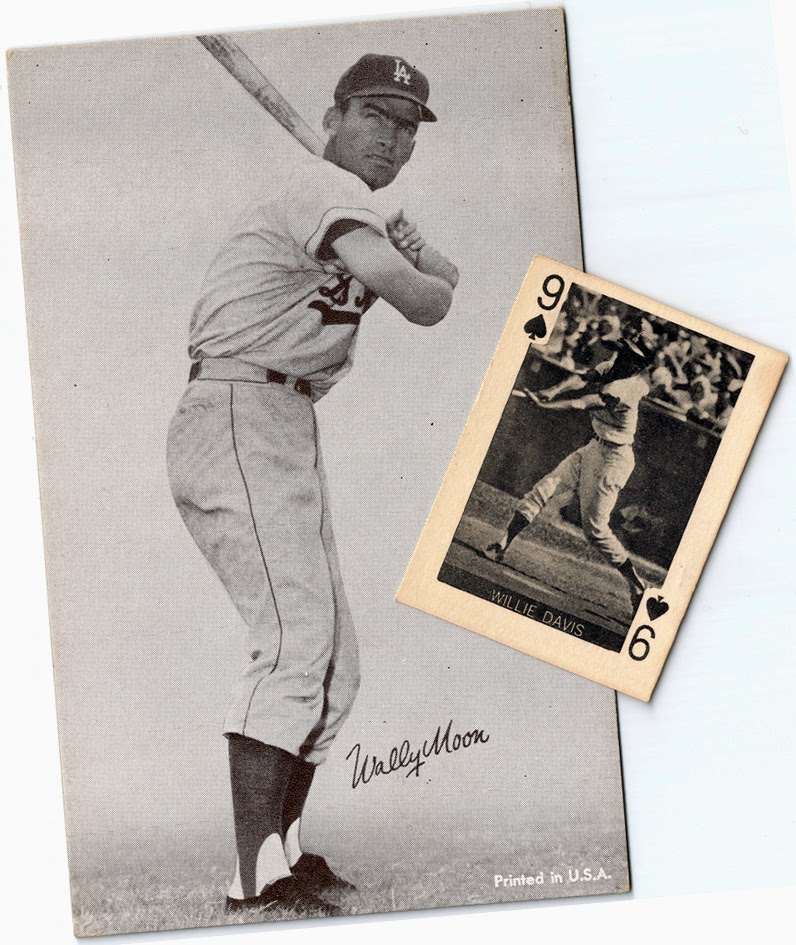 I had all but lost touch with reality by the time Nick started to reel me in... 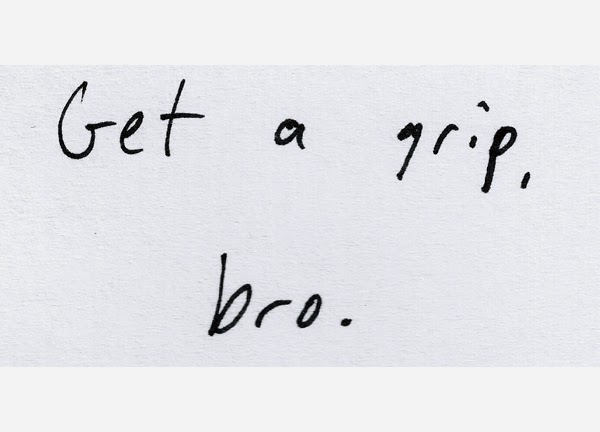 Thanks, Nick. I needed that! Stay tuned. When next we revisit the First Dime Box Card Show, we'll take Nick's advice to heart. In the meantime, pass the peanuts and Cracker Jacks, wouldja...?
Posted by petethan at 8:50 PM