I Was There! Seriously!

There were about 1.3 million people in Dodger Stadium the night Kirk Gibson homered to beat the A's in game one of the 1988 World Series. Not really, of course. But people like to exaggerate. The official attendance on that fateful Saturday night at Chavez Ravine was 55,983. Some of them had their car's taillights immortalized in the endlessly replayed scene of Gibson's unlikely blast sailing into the bleachers. I'm not sure of the number of people over the years who have said that they were there that night. But I'm guessing it may be closer to my sarcastic figure than the real one. 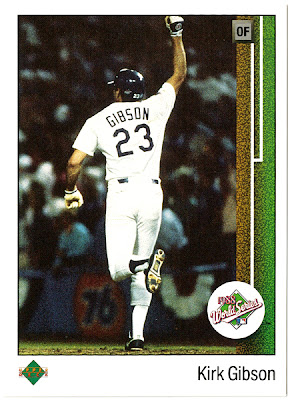 I won't lie. I was not there that night, as much as I wish I had been. (Though listening to Vin Scully call the game on television was certainly an acceptable alternative.) But I am very lucky to have been in attendance at more than a handful of games that baseball fans will instantly recognize, including some of the most famous contests of the previous decade. I am well aware of my good fortune, and those memories have served me well as it has now been a little over six years since I last had the pleasure of attending a major league baseball game.

Considering my good fortune, it's appropriate that the number of games on my "I Was There!" list is seven. As a way of reliving those precious experiences, and sharing them with you, I plan to launch a series of posts about those games. And to continue with the theme of having good luck, I'm also going to have a little contest.


Okay, I just wanted to increase the chances that people actually read this post and don't miss out on the opportunity.

Here's all you have to do (not that there's any chance of actually accomplishing this): Guess which seven games I'm talking about. I'll give you a few hints.

1) If you're one of the three people who follow this blog regularly, you've already read about my attendance at one of these games. If you haven't been reading, enjoy digging through the archives!

3) Astonishingly, none of these games took place at Dodger Stadium, and only one included the Dodgers at all.

Naturally, nobody's going to come up with anything close to the complete list. But whoever has the most correct guesses among their seven by the time I begin this series (Friday, 8/2) will win a PWE with cards connected in some way to each of the seven games in question. Sounds fun to me, anyway.